Tonight I went to visit my friend Fabio (@fabrews) in Rotterdam.

For the last 2-3 months we both been both very busy. We didn't see each-other much.

He's been traveling to Brazil and he works hard for the company he works for. And he's also getting married soon, so he needs to make all kinds of arrangements!

(I'm one of the best men btw, and I'm going there for the wedding!)

I have been busy with dismantling my own company (and crypto related things.).

I'm slowly gaining more freedom but I'm still working at letting it all go. (you just can't walk away from it straight away, I feel to responsible).

I'm glad that we both are finding more time now. And see each other more often.

He's a friend btw that I of course met through Bianca years ago. Brazilians are just so much better at making new friends.

We decided to go to Markthal and have beer there. 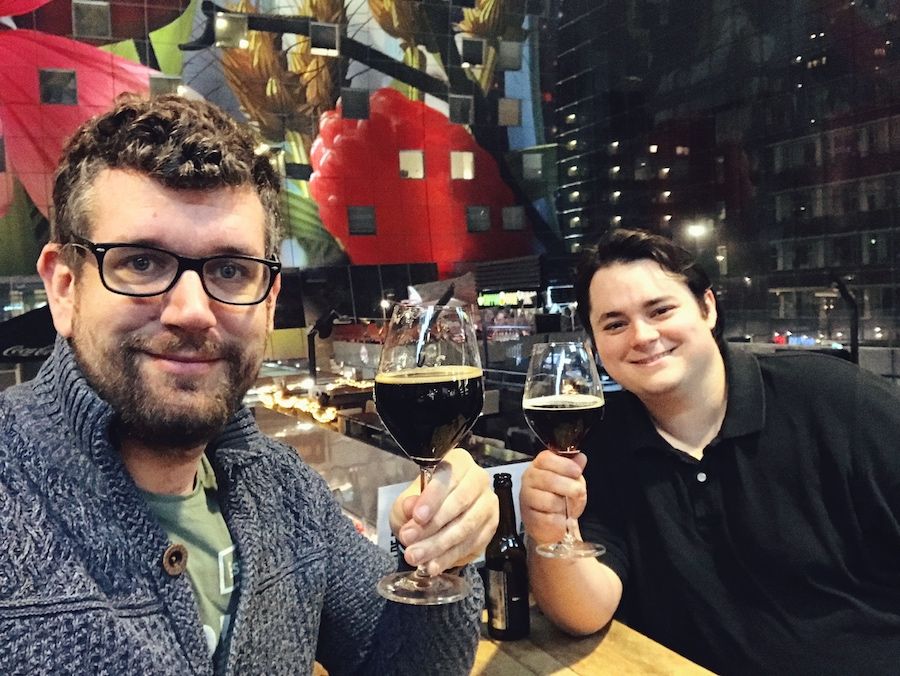 The world of Beer is were we went. And they have a nice selection of beers that you can try.

I noticed they introduced a new Brewery from Tallinn, Estonia! I had to try a beer.

I went for a Stout Barrel Aged in Chianti classic wine barrels.

Wow! It was amazing. I had no idea they could make beer this good in Estonia!

We bought some more beers of the the same brewery to try later that evening. 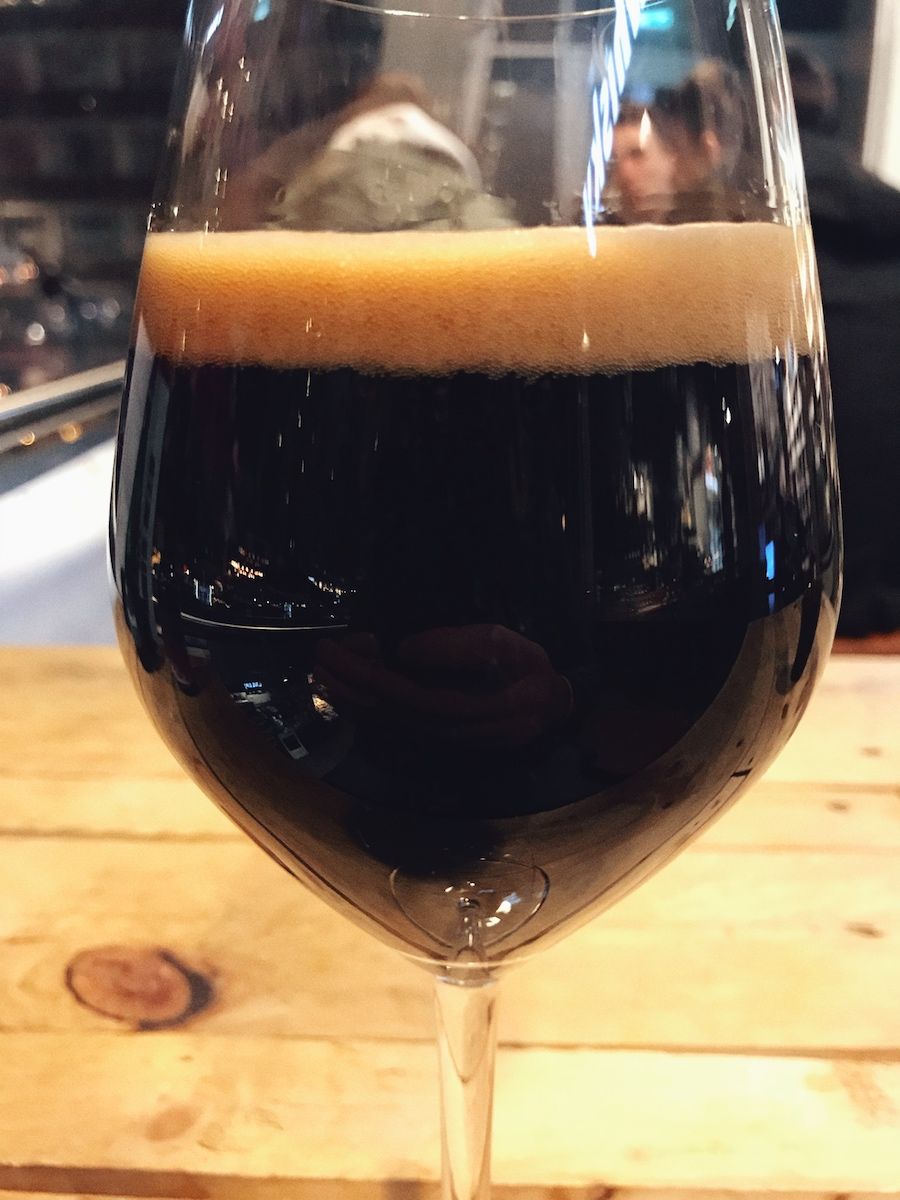 After the beers we went to Fabio's place.

He has an apartment in the centre of Rotterdam.

This guy is besides being very knowledgeable about beers an amazing chef. He wanted to show me how to make Short ribs in Coca cola from the pressure cooker. A combination I never thought would work. I was wrong.

The recipe is so simple yet genius. Simply marinate the ribs in some spices, brown them and then add coca cola and soy sauce to the pan. Close the pressure cooker and cook for 30 minutes. Done. 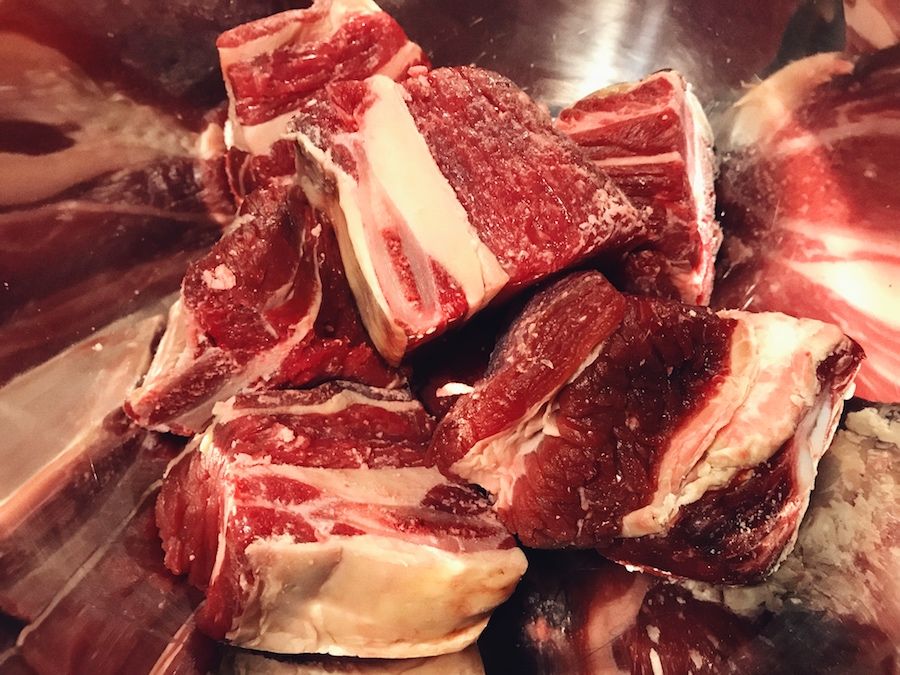 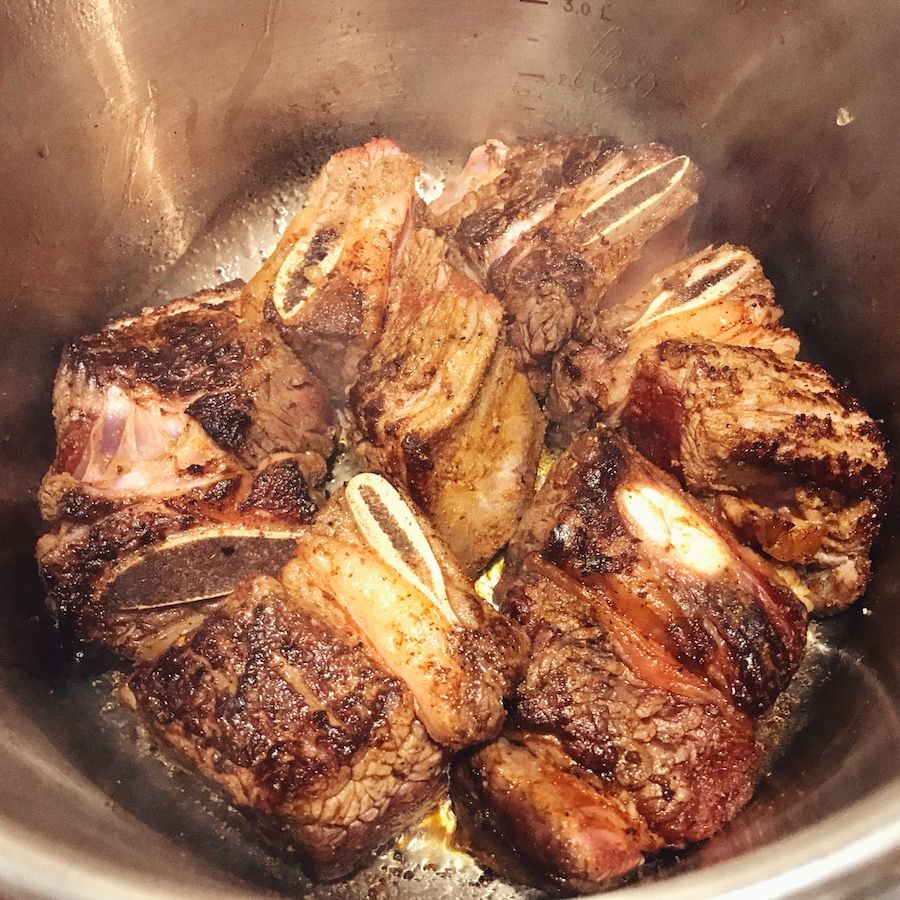 He served the meal simple, with a little bit of rice and salad. It was amazing. We had another beer from the same brewery. Again, it was awesome! 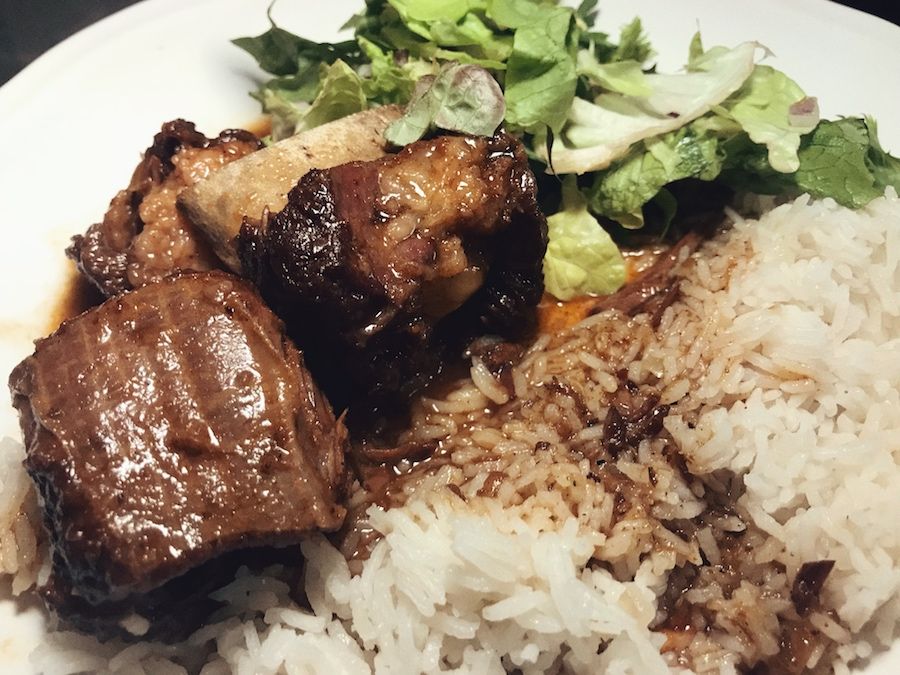 Later that evening Camilla (his girlfriend and future wife) and Bianca showed up too. We had a nice chat with all of us. We laughed a lot. 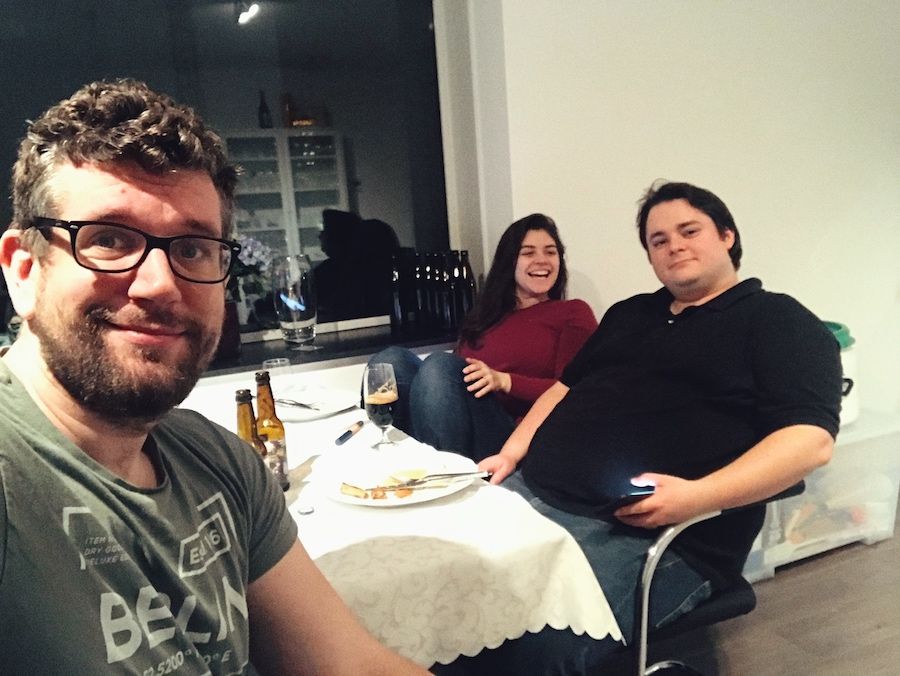 We did have to go home early though.

Tomorrow Baby Sam is coming for a long babysit session.

I had a great night!

I am a witness with our developer group @blockbrothers for the Steem blockchain. If you want to support us I would appreciate your vote here.

We build Steemify a notification app for your Steemit account for iOS.

Sori Brewing is actually a Finnish brewery. They moved to Estonia because of the strict laws in Finland, now they can brew without compromises! :)..They have excellent beers!

Thanks for that info! That's cool to know! The beers are indeed amazing.

Any Ribs left.. I am hungry.. sounds so yummy..

Mmm, we have to try this

Congratulations to your friend
And thank you for sharing all these wonderful moments of your own life. You and your friend are an example of successful people in their lives who deserve this success

Oh yeah, it's a great time, my friend when you can spend time with friends over a glass of excellent beer and chat! It's nice to see you and Fabio together in a good mood and I'm sure that the ribs with coca cola also suited you! Thank you Mark.

Congratulations to your friend on his wedding. I wish I can have some of thise beef steaks and rice. Lovely photos you've got there. Enjoy your beer. 🍻

That was such a great night out for you, and the recipe with coca cola was fantastic-will try it out. Wishing Fabio and his future wife all the best, all the best to all of u, the coming days will be incredible :)

It's cool to know that the both of you had some time to catch up. All Work and no play they say makes Jack a dull boy so times like this are priceless.

Who thought you to do that and what's the actual implication of boiling meat with Coca cola???????

Believe me, it works. In the pressure cooker.

it seems you guys had so much fun , i wish i was around to taste the food , it looks mind glowingly tasteful.

It was really nice.

Damn coca cola with short ribs?! I was doubting it as well until i saw the pictures lol - it looks GOOD! Almost looks like Korean marinated BBQ

It works. The coca-cola sort of caramelises.

Chianti barrels, damn that sounds good! I hope you get well rested for the long Sam sitting!

Man, I am sure you would have loved it. I'm rested and it's already been a huge adventure with Sam so far. He's sleeping now.

Wow weekend started on a great note damm you are enjoying the Delicious food :D

Never heard of using coke for ribs, they look great. That is one I'm going to have to try.

Me neither, but it sure works!

Working in and out of Brazil that would be awesome and the wedding is there even better! I know what you mean take it slow to gain more freedom its better to have everything sorted before deciding to give it up. Lovely beers @exyle oopps steemfat3.

Brazilian ppl are the best, most of them don't like my country very much (Portugal) but it's ok, i still like brazil the same

@exyle I like you did not know that you could make Great Short Ribs in using Coca Cola. I love to learn new things everyday.

Beer was pretty serious indeed. Very delicious though. I could recommend it any day.

I enjoyed your blog, I look forward to some new one with beer + friendship + good food. It is hard to find that good combination. Thank you for your blog.

it's nice to see you going for an outing with your friend fabio and it seems you guys really enjoy your time and i really like that short recipe, short ribs with coca cola, honestly i don't know about this dish but after reading your post i know about it and i will try to prepare it soon, The end result of the dish was awesome, wish you all a very joyful and cheerful weekend ahead, Stay blessed

@exyle,
Are you sure, how this tasted? Coca-cola using to make meals :O I didn't knew this before! Yeah a bottle at the fridge and I will try to cook sausages today :D Hope it will work well :D

Surprisingly it works a treat, get them sausages cooking!!! :-)

I don't think that was diet coke:P

Can't use diet. No sugar to caramelise.

You must be a true lover of beer hehe. I’ve heard of that recipe for the ribs, but as someone that’s studying nutrition and trying to avoid anything coval-cola related.. they do look delicious though! 😬

I almost never drink coca-cola either. But this was really nice with the ribs.

Yeah I can imagine the sweet meaty flavour. :)

O dang. That looks like that life for sure.

GoodMorning, Im still full of the beers from yesterday, (carnaval) but I have to admit ; those dark brown beer does look attractive already.... and the ribs; prepared that way makes me hungry.
Those two “things” proves Im ready for a new Day to celebrate the Carnaval festival.
I read your friends come from Brasilia; that place crossed my mind and thinking how they celebrate the carnaval overthere...... so your post leave me with a lot good thoughts.
Thanks and have a Nice Day !!

Enjoy with him and say to him Congratulations

A little logo I made for you. 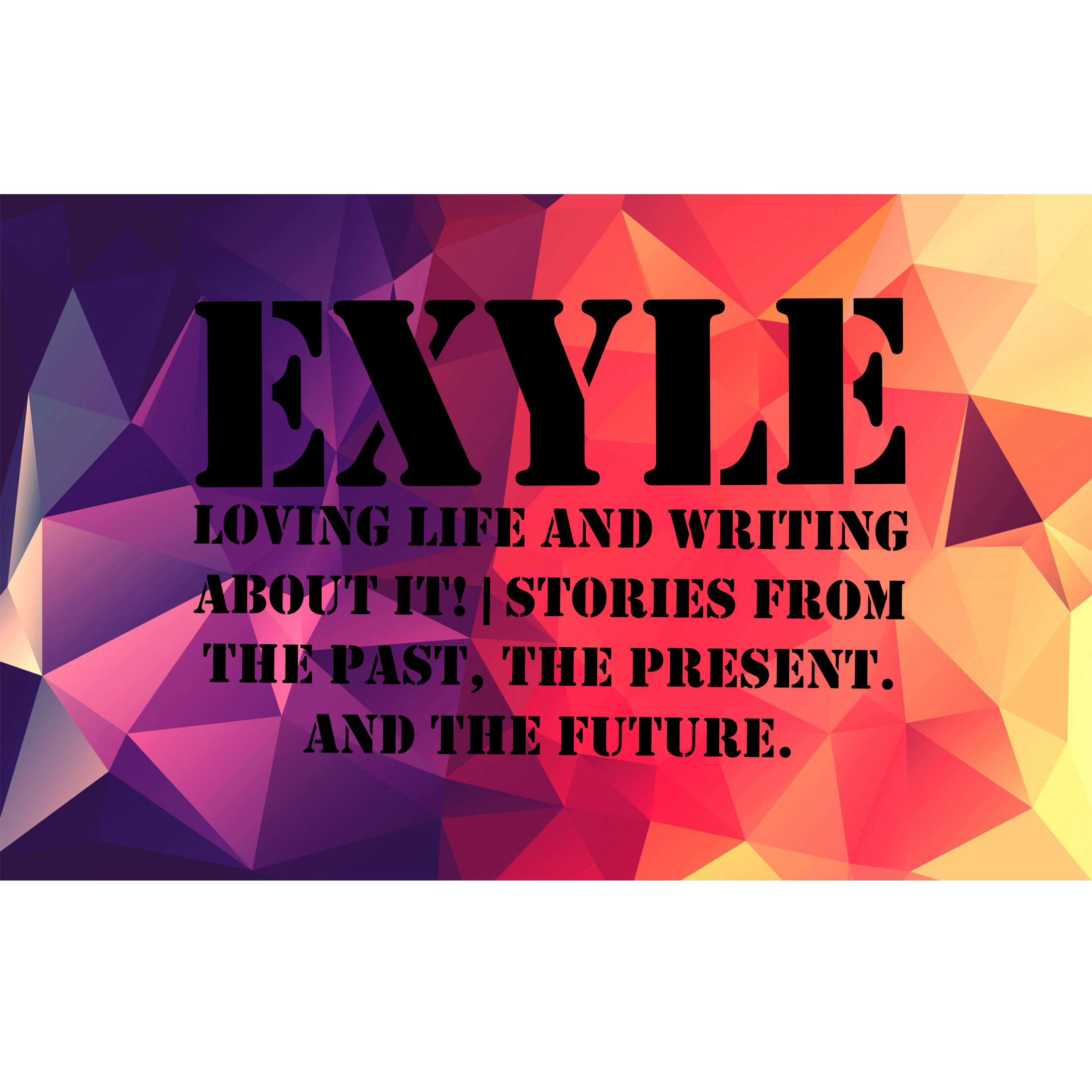 You bad guys give me envy to eat again!!!! lol

I hope i get my invitation letter but if i dont ,i wish him happy married life in good health
May he and his wife have sex till eternity and give birth to lots of healthy children... @exyle

Oh my, and you didnt take me to tag along😭😭.
Lol, nice one buddy, live life to the fullest

enjoy breakfast
If in Indonesia we start with drinking coffee

It opened my appetite your article, I'm going to get a beer freche.I forgot a lot of happiness to your friend Fabio!!!
@exyle

Lol. I can imagine the afterthought each time you get to think of Baby Sam and a whole day of baby sitting. Hahahahaha. You really need your rest an completeness to outsmart and solve all the tricks he would be coming up with tomorrow.

Wow. I love the story tho. Once in a while, its really good to cool off. And cooling off with a rare kind of tasty food and drink, it's memory that would last a reply long time. Kinda surprised tho that there are meals you prepare with Cocacola, its my first time to hear of it tho.

And I smiled when I heard "Fabio is a great chef too", its super romantic when ur male partner is skilled in kitchen affairs, LOL. @exyle, hope you are learning from him or you're a great chef too?

Thanks for sharing this beautiful piece @exyle and I must say, your pictures are colourfully beautiful

Cats should not be fed tuna exclusively, as it lacks taurine, an essential nutrient required for good feline health. Make sure you have the proper Pet supplies to keep your cat happy and healthy.

looks like you guys had a great evening! good beer, tasty meal and good talks, thats what i think live is about :D

Well thats unconventional! indeed fabio looks like a path breaking chef out there what else he has in his menu of this kind I'm sure it's tasty too,apparently the looks are intriguing .
@exyle rock the wedding with a humour speech.😊😊

Sounds like fun! Wonder if they had any San Diego beers in there. We have 130 or so breweries now!

a fun trip, happy nenikmati, hope your day is fun and happy always, try it is very fun let alone gather with friends must be one thing unforgettable, thank you

perfect ribs to enjoy the day with looks a delicious meal and having friends along is always a joy :)

Wow, your bestie is good chef too. Smiling faces representing the quality time you must had. Hope you have memorable time on his marriage too. Best wishes for both of you.

Rice and salad made the dish even more amazing and yummy great day it was for you to enjoy :)

Okay, that photo of a plate with ribs and rice was mouth-watering! Yum!

I like the fact you can cook with coke cola , my fave drink x

enjoying the moments and having fun good talks too great food awesome it was to see your post bro :)

That seems like a nice recipe. Thanks for sharing.

wow, the food looks amazing :D (I'm hungry :P )
Hope you had a great time with your friend, because friends are something very important in life...

Halo @exyle glad to know you so I know your nice pistingan. regards

Man that was aa great time indeed. Sorry for not commenting earlier but I'm still recovering from so many varieties of beers we had. Just finished the last peaces of the ribs and they still taste great. Enjoy yout weekend and look forward to more beers and food soon!

happy married life in advance.... and keep your hands always on a glass of cold beer #enjoy

already salivating for the food and a glass of cold beer# good story. happy married life to your friend.

Is that the spring chicken saying he is not as young as he used to be? lol Wait to you get to be my age and then see what you say! It is cool that you will be going to Brazil for the wedding. Will you be staying with Bianca's family?