How? Is the time accelerating? ⌚ 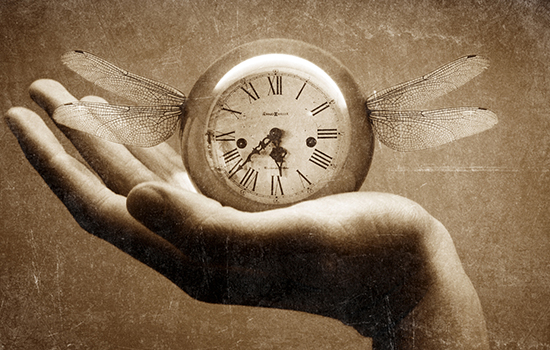 Although it seems relatively recent, it has begun to register this acceleration of time since the beginning of the decade of the '80s, today there are several scientists
they agree that there are certain factors that are converging in this "feeling of vertigo" more and more intense, which affects the human being in different ways, as we will see in this post.

This situation has been worrying different scientists from different disciplines, who have studied the effects from different perspectives such as being; from the psyche, among which stand out the increasingly common bipolar behaviors, depressions, phobias, anguishes, sleep cycles, as well as the biological responses of adaptation. All this is due to the fact that circadian rhythms are being deeply affected by the factors of Time and Light that our consciousness has begun to perceive as different and that require a process of conscious evolution thus "tuning these new frequencies", since it is happening too fast for this adaptation to occur naturally.

Currently popular culture has accepted that the linear time in which we move, is accelerating more and more. Some researchers assert that the actual duration of a day lasts 16 hours. not 24 hours
Generating high levels of anxiety in this frantic lifestyle, which increasingly keeps people mired in consumer illusions away from natural cycles.
Never before the biological clock was so disconnected from the terrestrial and cosmic cycles, generating in this way a disconnection between the "inside and outside" and the very center of the individual, affecting in this way a delicate inner harmony that ¨desordena¨ the energies electrical and magnetic in the being, gradually unbalancing the vital energy of the physical body, by the levels of stress that is generated daily, being increasingly difficult to counteract in a weekend of rest, which rarely is usually in contact with the nature.

The Shumann Resonance and the biophotons

We can say that the Shumann resonance is the pulse of the Earth itself. A frequency that this year has reached alarming levels ... reaching up to 36 hours. Consider that in the 80s it was 7.8, in 2014 it had reached 15 hours. and in the next three years he exceeded 20 hours, until he reached 36 hours this year ... all this in a very short time!
Although they have tried to hide these indicators ... they have already come to light, demonstrating the origin of the problem over this acceleration of time that we are experiencing abruptly, pointing out something alarming if we do not leave the "maya network" of illusions, which it keeps us disconnected from the real time.
To understand the context of this whole situation, it is important to emphasize that human consciousness is closely linked to the energy of the earth, that is to say, to the magnetic field of the planet that has diminished. As it is also influenced by the energy that comes from the cosmos, especially from our sun that is in an intense activity emanating great levels of plasma that our planet receives, something that science re-discovers in the biophotons, a fine energy that gives us a
very subtle information that demands of our sublimated physical bodies, in order to be absorbed by our conscience, but mental noise and stress interfere in the decoding of this subjective information. As I mentioned above, Time and Light are the factors that influence this great earth and cosmic change, an aspect that all ancestral cultures predicted.
In this context, it is key to understand that our planet is like a "resonance box" which has changed its tuning and we as "instruments" need to sharpen in this new frequency, both terrestrial and cosmic, and the wise men of the past taught about the "Music of the spheres" that the awakened co-Creator begins to discover and resonate in synchronicity with the universe.

What do the prophecies tell us?

It is not by chance that all the prophecies somehow emphasized "the new time", surely you will think that they are old news ... but consider that at this moment they have much more validity than ever! Let's review these aspects; The Mayan prophecy told us about the "Time of no Time", the Inka prophecy (known as the Taripay Pacha) announces among other things, about the "Time of re-encounter", the Christian prophecy (the apocalypse of Saint John) mentions the sentence of the "End of Times", being interpreted as the "end of the world", when we were always told that the "time factor" would change drastically and for this it is necessary to be up to the circumstances, that is, we need to give it the "Support" necessary to our conscience so that it can take this quantum leap.
The "re-unification" of the times From another approach, presented by the French scientist, Jean Pierre Garnier Mallet, who for some years has been exhibiting his fascinating theory on "Temporary Openings" where he explains the prophetic sense of the unification of the times¨ that our ordinary consciousness can not perceive. Being possible, only through our expanded consciousness that he called; "The double" ... which is none other than us in a multidimensional version, exploring the different lines of time that exist.
Living in harmonic resonance Connecting with true time in a spiral frequency, requires leaving the influence of linear time, known as the chronos yoke (also known as saturn) ... where time is only perceived as a tyrant ... something we can understand from the materialism that values ​​it from the productivity, something that we can recognize when the flag of "time is money", when in fact it is as they taught the different cultures of the past, where "time is art", but for this is key recover our place in our present and begin to reconnect with the
natural cycles, recovering our vital energy and empowering us in our luminous nature.
It no longer serves to anchor in theories of conspiracies that only immerse you in fear and despair ... Today it is imperative to raise the frequency of our thoughts and our resonance in order to reach a new evolutionary stage.

I Hoper you upvote❗ 🙏