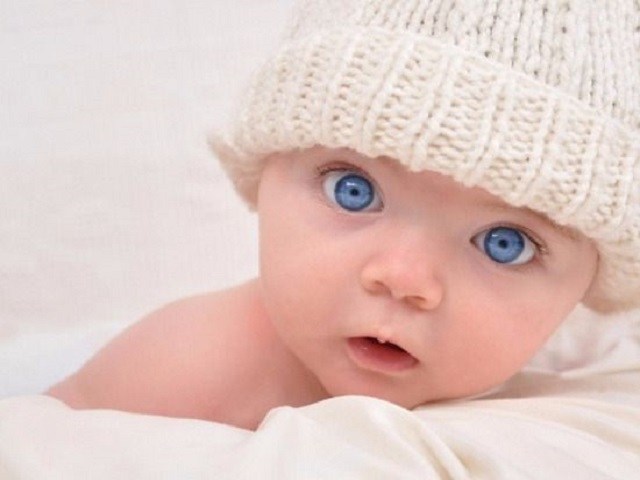 While waiting for a child, it is fun trying to figure out who parents can look like. Will the hair be from mom or dad? And what will be the color of the eyes? The newborn eye color, as we know, could change with growth. So let's see if the blue-eyed babies change their eyes color or not. The blue eyes are of this color because they contain a small amount of melanin and because they are related to the density of proteins in the stroma, or the structure of the eye. In January 2008, a Danish study showed that a specific mutation in the HERC2 gene that regulates OCA2 expression causes blue eyes. People with blue eyes can sometimes appear rather shy and very cautious in life. Having blue eyes may have advantages especially for women, as according to a study conducted in the United States, women with blue eyes and in general with light eyes are more likely to bear the pains of childbirth than women with dark eyes. When a child is born, his eyes are always gray or blue because they contain little melanin. The latter is produced by specialized cells, called melanocytes, which are activated only in the presence of light, and since the baby has been for nine months in the dark in the womb, the melanocytes begin to activate only after delivery. Only at the first birthday will you really understand the newborn eyes color.

Newborn eyes color
The newborn eyes color, a genetic feature, not always as obvious as one believes. After a while from the birth, you begin to understand the definitive baby eyes color. In particular, the baby will have blue eyes if his melanocytes secrete little melanin, green or hazelnut if they contain more. When the melanocytes work a lot, the newborn eye color turns brown: this is the most common color.

Eye color
The eye color, according to recent studies, also vary the personality of an individual. For example, people with green eyes are considered particularly fascinating and mysterious. This is stated in a study published by the Impulse Corporetion of Los Angeles. According to Dr. Hamadi Kallel, who has studied eye color for a long time, people with green eyes are original, creative, they work very well under pressure, they are rather mysterious and self-sufficient, they get angry and are often unpredictable. A different study, instead, he found that dark-eyed people are generally better in sports because they tend to struggle a lot to achieve their goals. In general, people with dark eyes are considered mysterious and pleasant. Those with a light brown or hazelnut-colored eyes are independent and self-confident. The gray eye color is rare and actually represents a variation in the color of blue eyes. According to experts, sometimes people with light gray eyes have a multi-faceted personality with whom they struggle to stay in balance and have to work hard to be taken seriously by others.