Our grandson Sam stays with my husband and me for two days. When he came, his mother brought him on her bike, he was thirsty. He drank his bottle as he stared at the tower that grandfather Sjoerd had built for him. Nothing nicer than throwing the tower on the ground! 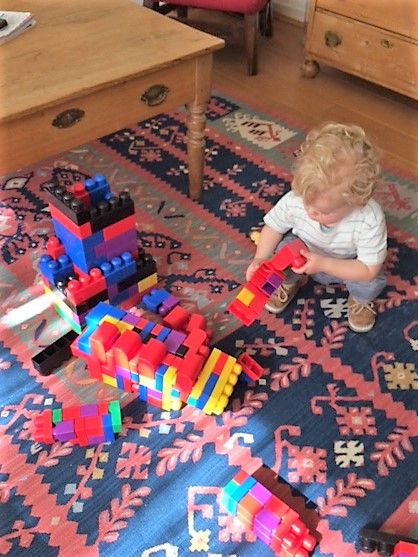 But Sjoerd is a patient grandfather and together they tried to build the tower again. 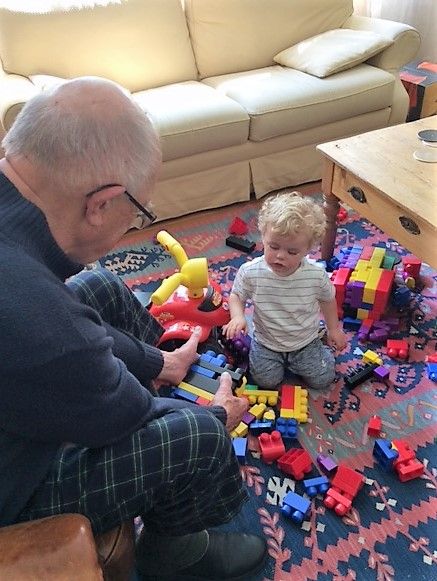 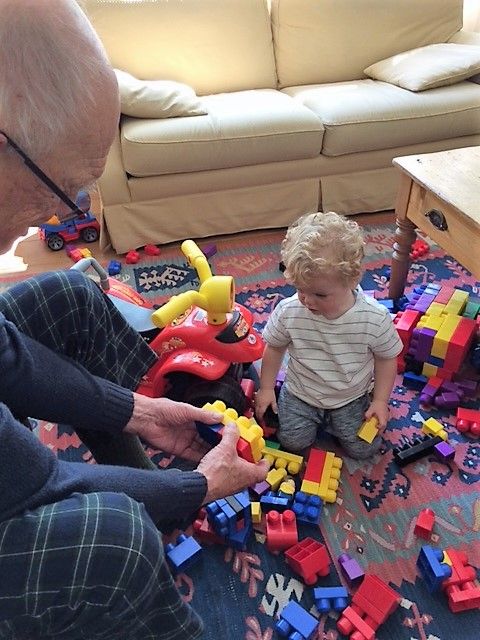 After working hard for about 15 minutes (that's already very long for a one-and-a-half-year-old boy), he walked away to ride in his car. After a few minutes, it was time to go to bed for his afternoon nap.
His grandfather has built a new tower. We are curious what he will do when he wakes up :) 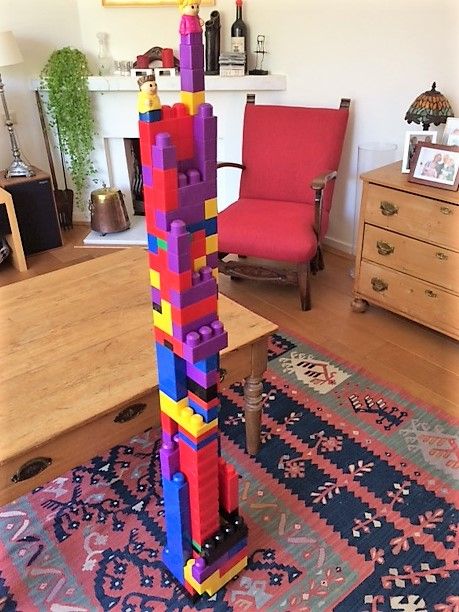 I also wish you a joyful day.
Clio

Beautiful photos, Clio. Baby Sam and his Granddad will have lots of fun building, destroying and rebuilding that tower. Great memories for all. And Sam will get to look back at the photos with fond memories when he grows much older. Grandchildren are what keeps us young.

Yes, they had a lot of fun. Sjoerd has a lot of patience and Sam loves him. They can play endlessly.
I hope he will see this post (and others) later when he is older. They keep us young, but I must honestly say that I am pretty tired when his parents have picked him up again. It is a great responsibility.

That's why God gave us children when we are younger, so we can keep up! They really tire us out when we are older!

He will knock it down and desire another tower to destroy!

He did!!!! He can go on endlessly. But, his grandfather has a lot of patience.

Wow, he is coming on so much. I love seeing this because of my little tyke who is a while year begins but what a year it is going to be!!

It goes so fast. Only a year ago you could lay him down and he would stay down. But now..........
You know it already because of your daughter, but each child is different so you have to wait and see what happens.

You do indeed. We are at the laying down stage and trying to enjoy it before the the super mobility!

I am going and seeing my grandbabies tomorrow. They brighten my world so much. Have you gotten your mail from me yet? Curious how long it takes for shipping from the US to your country.

You said it right! Grandchildren brighten our world. It is such a pleasure to be with Sam and my two granddaughters.
I think your package is already in the mailbox in the post office, but Exyle (my son Mark) was not able to go there. So he will do it tomorrow and I see him Sunday (mothers day in the Netherlands). I will get it then, I hope!

Look at this little man being a whole human all of a sudden. It is cool to see the change on them when you missed a couple of weeks right. Then you REALLY see the change!

Im seeing my little niece talking whole sentences all of a sudden since last November..so cool!

Isn't it a wonder to see the children change so fast. The become little humans instead of just baby's.

Aw, soo Cute baby, lOoking so pretty playing with toys. The tower is Awesome!
I'm sure when he's wakeup, he's fell down the tower :D

Yes, he did. The tower was only standing for 5 minutes after he woke up!

When he first has thrown the tower to the ground, he was looking in a sigh what has happened and how will this come back! Then his grandfather became his helper and now when he will wake up he will surely be surprised to see it built again!!!

Yes, he was glad, but he loved to destroy it again!

funny baby, I see you are very happy with your grandchild. maybe your grandson is the same age as my child, look at my post

Our grandson is one-and-a-half-year-old. How old is your son?

cute baby play with toy,,so great photography
i wish for a better future of cute baby

awwww!
Beautiful kid, looks like intelligent too!
I'm i right?

wow funny baby, football player of the future foot of the Netherlands State

the baby is creative, but this is all the role of parents, as well as his grandfather

Affection of grand parent is seeing on your post. Grand parents enjoy the company of cute kid. love to see your post. Have fun @cilo keep sharing your loving experience:)

definitely happy to have a creative grandchild, hopefully the future will be a creative teenager in his life