Accidents do happen! But what a mess it can be. Or, why we treated ourselves to a delicious dinner. 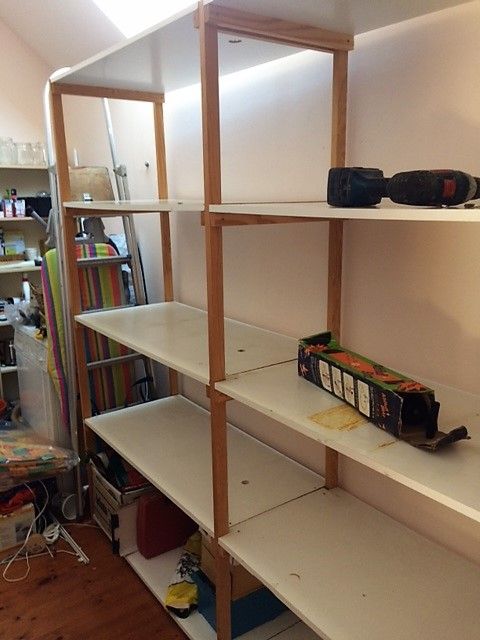 Yesterday I wrote about our visit to the restaurant on the lake. I told you we thought we deserved it because of what happened that day.

No one was hurt and we can laugh about it afterward, but it was not so nice when we discovered it.

I woke up in the middle of the night because I heard a strange sound. As if someone fell with a box of apples or something in his arms. I thought maybe Sjoerd, my husband had fallen after or before a visit to the bathroom, but he was lying next to me, I was so relieved. He also woke up and we heard the noise again.

I left the bed and checked the house. Nothing to see. We have not heard the noise anymore, so we went back to sleep and slept until 8 o'clock that morning.

I went to prepare breakfast and I needed a bunch of breakfast cereals. We have a huge storage room on the first floor and I went to that room and opened the door. The door would not open. There was something that completely blocked the door.

We could make a little crack and saw that some of the camping gear had been dropped and an electric stove, we could not see much and I could hardly put my arm through the opening and feel what was lying there.
We could not open the door any further and we knew it was hopeless.

Fortunately, we have a Dutch friend here who works as a contractor and I send him an app. He wrote back: "I am with you within half an hour". He came, tried the door and came to the same conclusion as we did. The door was completely blocked.

There was nothing to do but to remove the door. But the door hinges were on the inside, so we could not remove the door (I had already checked that). So Machiel took a drill and a saw and went to work. 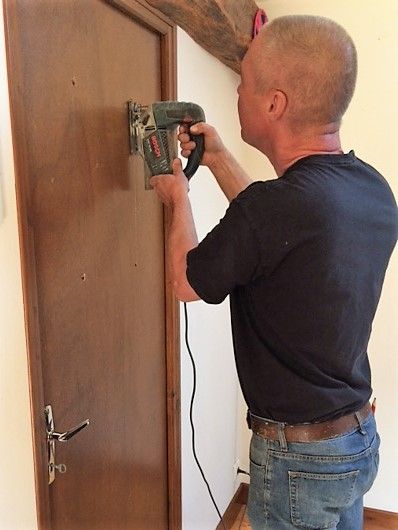 To our dismay, the racks that covered the entire right-hand side of the storage space turned out to have fallen. The racks were fixed to the wall, but the bolts had just been pulled out. 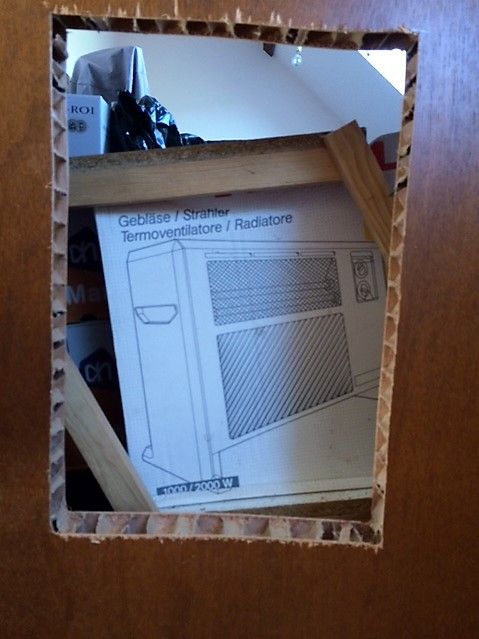 Machiel is very strong and he put his hand through the window he had made and tried to push the rack back slightly. I could slip through the door and hold the racks. The mess was huge.

Everything had fallen out and the floor was strewn with everything that was first in the rack. But we were inside !!!

We dragged everything to the hall and I was able to save paint pots just in time that started to leak. 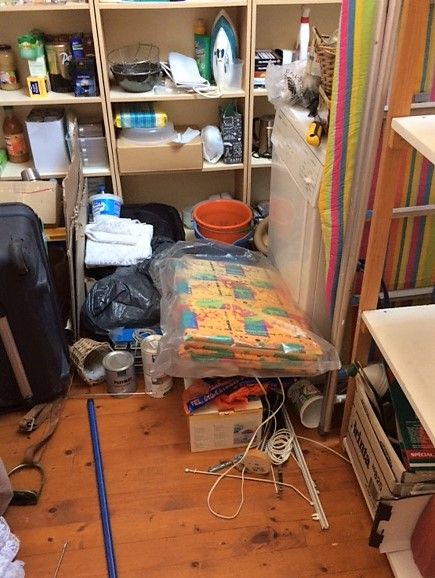 It was a perfect time to clean the rack, so I did so after Machiel put the rack in place and secured it for the moment. He will do better at another time. I said to my husband, "It is a perfect time to throw away things that we never use!" But he did not want to hear that. He prefers not to throw anything away, because you never know if you do not even need it for something.
I don't mind, we have space enough.

At the end, this is all that I may throw away! 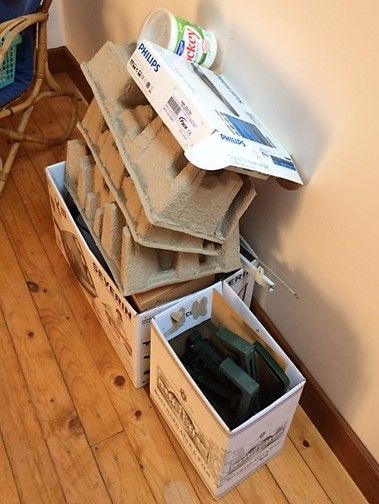 After an hour or two everything was fine and I was able to rearrange all items on the shelves again.
In the foreground you can see the beam that Machiel has used to reinforce the shelving unit. It was a warm day, so we were relieved when the work was finished. That is when we decided to go out for dinner that night, and that was, as you know, a great success. 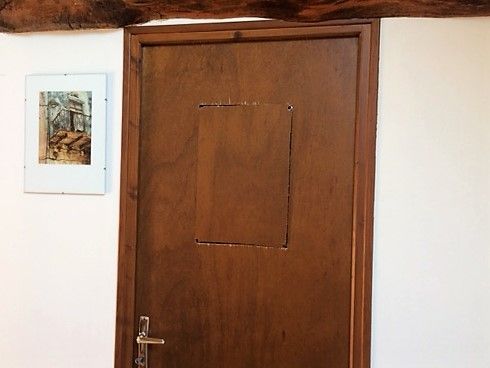 I hope to have a nice quiet day today.

I wish you all a nice day too.

Wow very interesting. Thank god finally you both are safe and sound, but very excited happenings. Thanks for sharing friend, Good luck.

Yes, we are both safe and sound, but I thought how glad I was that I wasn't in the room when the rack collapsed.

Well, the accident was a perfect opportunity to clean up and throw stuff away, but I see your husband is like mine was: you can't through anything away because you never know when you might need it! That must be the mantra of all men! When I went to do a cleaning after my husband past, I found boxes of things that I have no idea why we were saving them. Boxes with old car seat belts, burnt out headlights, and that old ratty flannel shirt that I thought I had thrown out years earlier...

Men!!! I had to laugh when I had read your comment. I told my husband what you wrote and he nodded understandingly. He meant that he had understanding, clear understanding for your husband!!

Hahaha. A good reason for a small cleanup ;))

But why did all of this fall then.? Love the inventivity and new door-look that this brought on the other hand though!

I think the bolts slowly loosened and eventually, they gave way.

That would have frightened me in a huge way!! Glad it wasn't anything too serious. I have to admit I did giggle when I saw what had happened.

I also liked the idea you shared with @meesterboom to cover the cut marks with a picture frame. Maybe even have a mirror on it. Great idea!

My husband is the same about not wanting to throw things out, just in case. He even keeps boxes from things we buy. Those I sneak into the recycle bin though. :)

A mirror! That is the ultimate solution. I think I will do exactly that.

Men!!! Sjoerd does exactly the same. He also keeps the boxes, because, as he says: "you never know if you need them".

Use picture framing to cover the crack... a little stain... and back to normal. Or not. Someone may be obsessively concerned with appearances and need to replace the door and try to match the stain. Good luck on your trip.

We thought of using picture framing also. No need to replace the door. We are not so obsessed with appearances.
Thanks, I hope to post from the Netherlands next time.

You were lucky indeed to get the paint pots in time! You could replace the little hatch with a window!

Yes, we can do that. There was also a suggestion (from @doctorjohn) to use picture framing!
We won't replace the door, that's for sure!

Picture Framing would be an awesome idea!

@clio I know how it is to say I can't throw this out. Sometimes you just have to throw some things out. As I get older I realize how much life gets easier and easier if you minimize..............

You are absolutely right!! My husband thinks he has minimized already, but to be honest, I think there is a lot that he can throw or give away!

"It is a perfect time to throw away things that we never use!" But he did not want to hear that. He prefers not to throw anything away, because you never know if you do not even need it for something.

I hear this quite often, and I hear it twice. I can relate!

Hahaha! What a story. Will you keep the door like that or replace it?

For now, we will keep the door. Maybe follow Doctorjohn's advice or that of Meesterboom.

Wow, sorry to hear about the accident! I like how you're using this as an opportunity to get rid of things you don't use. It's always a good feeling to shed unneeded possessions.

It was especially annoying, my husband's medications were there and we could not enter, the door was completely barricaded. He (my husband) has more trouble than me to throw things away. But in the end, we did throw something away!

The final outcome was good then!

every event there must be a hikmahnya, the name of our accidents humans can not avoid. hopefully nothing happens

Indeed, hopefully, nothing happens. Please, can you say a little more about the word 'hikmahnya'. I never heard that word before.

wisdom, that after we have an accident, hope there will be benefits that can replace our losses, but we must be patient.

Accidents do happen! But what a mess it can be. Or, why we treated ourselves to a delicious dinner.

Very cool title! I can not wait to read the story :)
...
It's fun to enjoy. It's really amazing photography skills. Very beautiful and fascinating to all eyes. Thank you @clio for sharing the beauty and happiness that is so amazing today. Have a wonderful and exciting day.

Thanks for the compliment. However, it was not so nice to endure.

@clio it was really great work,,, that was warm day no dout
really great feelings of that day .amazing life story with awesome photography

wow
@clio it was really great work,,, that was warm day no dout
really great feelings of that day .amazing life story with awesome photography

@clio You were so lucky cause you weren't there while that rack fall down on the floor. Rack fallen was an accident and bad luck too. But you were absent there and it's a good luck , at least you're safe. Now i hope you husband repair that problem properly and hope you will never face any problem like that. Stay careful and stay safe. God bless you.

oh great occurance in your life ,,you passed a great noisy moment
,,thanks for share youe experiences

no dout you pass a awesome disorderd day.all moment was memoreble
..have a great day,,
thanks for experiences share ,

@clio it was really great work,,, that was warm day no dout
really great feelings of that day .amazing life story with awesome photography!