A Stone of Hope: How I Told My Daughter About Martin Luther King, Jr.

Being a parent is one of the toughest jobs on the planet. You’re responsible for trying not to fuck up an entire person. That’s a serious responsibility. Some days this is easy. Others its hard. Today was one of those days.

The day started no different from countless others, as I was dragged from unconsciousness by my four-and-a-half-year-old. Sun’s up and so is Ellie – “sleeping in” has never been in her vocabulary and probably won’t be until it’s right next to “hangover” – and that means I am as well.

This is okay. I can do this. I’ve done it just about every day of my life for nearly 5 years. It’s nothing new. Or at least I thought it was.

Things changed pretty abruptly after I sat down with my daughter at the kitchen table, two plates of breakfast in hand. Eggs, bacon, toast – I’m a regular June Cleaver in the morning. Only thing missing is freshly-squeezed orange juice but not even I’m quite that Stepford. After handing Ellie her plate and fork, and amidst fending off several hungry cats that were begging for pieces of bacon, I turn to her in response to a question:

“Dada, why is there no school today?”

Welp, that’s it. The talk. No, not the talk, though I think I’d be more comfortable with having that one. This talk, the one I’m about to have with my not-yet-five-year-old daughter, is going to be about Martin Luther King Day.

The thing is you can’t just tell someone that a specific day is a national holiday. Or at least you can’t just tell that to Ellie, considering she’s in the “I need an explanation for everything” phase. So if I went with “oh, everyone has off today,” that would lead to why everyone has off today. That would lead to “because we’re celebrating a special person’s birthday” to who that special person was, what he did, why he was so special… and why he’s not around anymore.

That’s not all I’d have to tell her, of course. I’d have to say why MLK did what he had to do, what the circumstances were at the time he was alive, how the entirety of the country we live in was split along racial lines. How men, women, and children faced prejudice, discrimination, intimidation, assault, and even murder just for the color of their skin. How the practice went back literally a century from King’s time to the Civil War and beyond… to how people were kept as slaves – as property on the same soil that we now walk every day.

How do you tell that to a 5 year old? How do you tell your own daughter that the US Capitol building was built through the labor of the enslaved, even as those within swore that “all men are created equal”?

How do you tell her that 620 million American soldiers died in conflict that, while many will claim was an issue of “states’ rights,” was at its core the right of a particular set of states to hold human beings as chattel?

How do you tell her that even after the war was “won” and these enslaved human beings were freed, they were still treated as subhuman by former slaveholders? That these people enacted dozens, if not hundreds of “Jim Crow” laws specifically to keep these new Americans in their place, far away from the white folk? That the era led to as many as 4,000 of these Americans being strung up by their necks and strangled to death?

How do you tell her that even as Americans sought to evolve past their irrational hatreds engendered and rationalized by economies of scale, that it wasn’t until the 1960s that people began to organize and push back against institutionalized hatred? That Martin Luther King helped lead the crusade against that hatred – and that he was murdered for his trouble?

What do you say? “No school today, baby. Someone pissed off the wrong people 50 years ago – probably the CIA - and got himself killed. To remember him, we get a day off on his birthday.”

That wasn’t gonna fly. Not today, not with MLK. Not when I’ve got a responsibility to not fuck up my daughter. So, instead, I told her the truth. That white businessmen took Africans as slaves, and put them to work in the New World. That they were freed only after the Civil War, but that they were still treated like animals for decades. And that even when the equal rights era reached its peak, the de facto leader of the movement – a man who one day dreamed his own children would be judged not by the color of their skin but by the content of their character – was assassinated for saying so.

I told her all that, the best I could. About how these problems still persist today – that too many people still judge each other based on the color of their skin.

More importantly, I told her that it was wrong.

Listening in between bites of her omelet, my daughter seemed to get it. I didn’t go into gory detail, of course – it’s not like I made her listen to Strange Fruit - but I think I got through. She paused for a few seconds, looked at me, an uncharacteristically somber expression on her face, and said “it’s wrong?”

She nodded. “Okay. I’m gonna go play now!” She took her plate and fork and left them in the sink. I watched her run into the living room, just another happy preschooler, glad that she had a morning to watch cartoons uninterrupted. The time for more in-depth talks about the topic can wait until she’s older. I can only hope what I said to her today sticks until then.

There goes the future, I thought. If only this kid, and others like her, can make the world a better place after I’m gone, I’ll have not fucked up. I don’t know what the future will bring. I’ve got no time machine or crystal ball. I can only have faith in the future, and that, as the man said himself, “that with this faith, we will be able to hew out of the mountain of despair a stone of hope.” 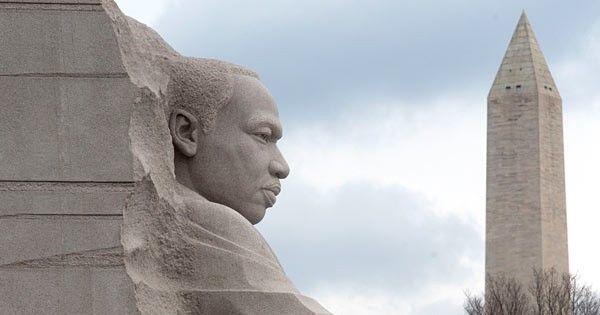 Nice blog . The little angels have their own school of thoughts and satisfied very differently . Upvote and followed

Baby? I know in my heart of hearts that you didn't fuck it up.