Today I felt nostalgic and wanted to recap a night that was really important to me: Ik dans de roamvong!

So here are my thoughts and some photos and videos trying to describe that night. Happy reading!

Around 2015 I had returned from being away for a few years (Sydney, Phnom Penh, Berlin) where I had learnt a lot about myself and also heaps about the fate of Khmer people in those cities. I didn't know much about our plight during the eighties and their reasonings and why things unfolded the way they did the last few decades. When I moved to Australia I was exposed to time, myself, the Southern hemisphere, behavioral therapy and lots and lots of conversations with souls that had crossed my path. When I came back to Europe I thought of the wonderful things I was lucky enough to have experienced and of all the people that had spent their precious time with me, educating me about their lives and why they do the things they do - and I thought of what it had taught me. 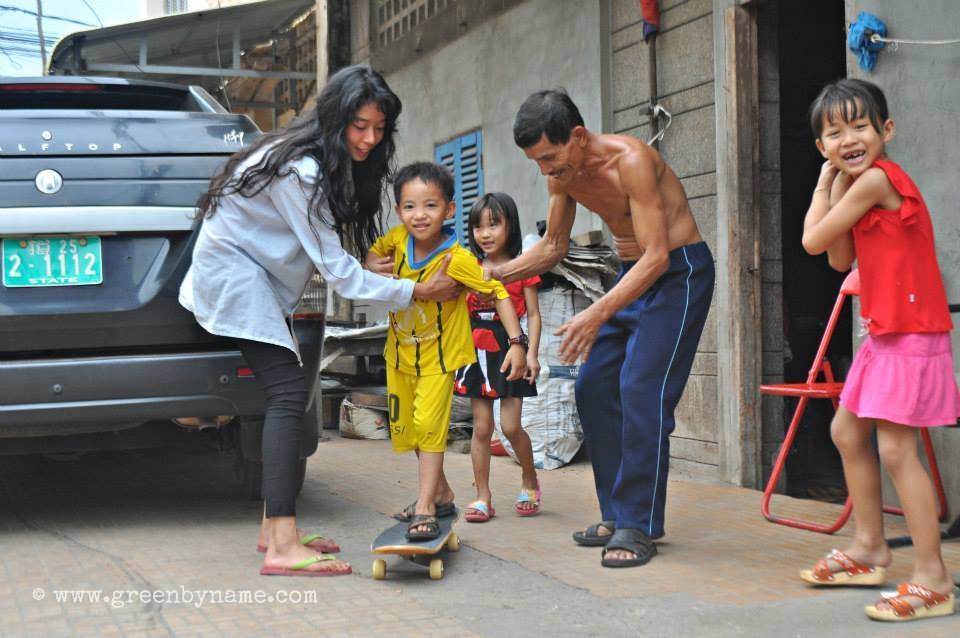 Every freakin' online hippy quote says so, but seriously it is not that appearant.

Somehow I felt that these ideas were not particularly articulated in our community, sometimes not even appreciated.

So I wanted to create something that could articulate these newfound philosophies and expose them to the community. I realise in hindsight that I can only be myself where ever I go, and the logic was actually: if I were to be in our community (back again) I can only be me which includes expressing what I believe and embody and until this day it's still these ideas.

Anyway - so I organised an alternative party with the help of other young Khmers called "Ik dans de Roamvong". To me it was one of the most important and cathartic nights of my life.

This was my impromptu announcement of "Ik dans de Roamvong" in my bad Khmer at the Pchom Ben party in Oss, thanks to Mory Ty

In this 'work' I wanted to become this persona which would inhabit these ideas summed above. By being "myself" I wanted to articulate these phrases:

Ideally I wanted the attendees to understand that enterpreneurism is a life saver and by fully embracing who you are and your qualities and flaws shit gets really real and fun! - without being preachy, cos that sucks. Ultimately if people had thought: dude I can do so much better, or, how about I do this idea and I do it with a bunch of other people (especially outside of your initial friendszone) - then I had hit the jackpot....

The beautiful flyer was made by Cheerted Keo. It is based on the the Dance by fauvist Henri Matisse with a flair of Khmer apsara's. So stunning. This is my partner in crime, the beautiful Kimberly Chhay who I had many conversations of planning with and was a superb organisor on the night itself. She is currently writing her thesis on how to re-engage second generation Khmers to care about our community. 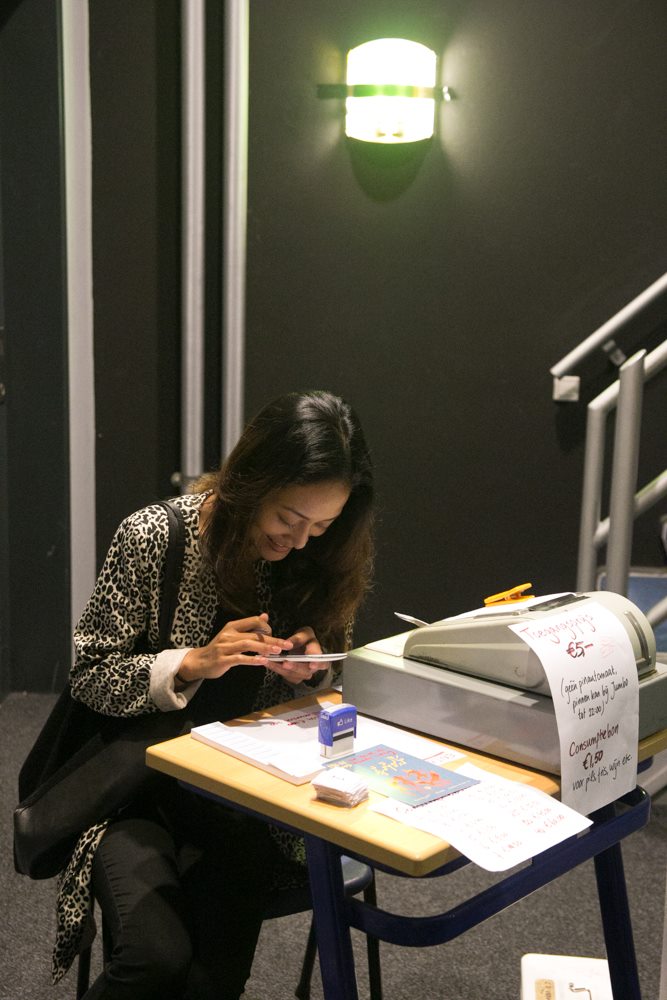 This is Arlin Keo and her wonderful bandmembers (Kims Funky Corporation) who decided to play renditions of Khmer rock and roll classics along with songs of their own repetoire. Arlin also hooked me up with Popcorner, the place the party was hosted by for free and with sound technicians and bar volunteers!

The charming singer songwriter Temy Phem aka Mekong brought his entire family to the party and appearantly it was a massive reunion since years. His mother, the first Khmer woman ever to inhabit this cloudy country, was a big help clarifying our story since the eighties and supplied me with heaps of photos! Our illustrator and flyer designer Cheerted Keo made an entire new piece and offered it as a tombola price and it was eventually won by his sister's boyfriend's mum! Keepin it in the fam! 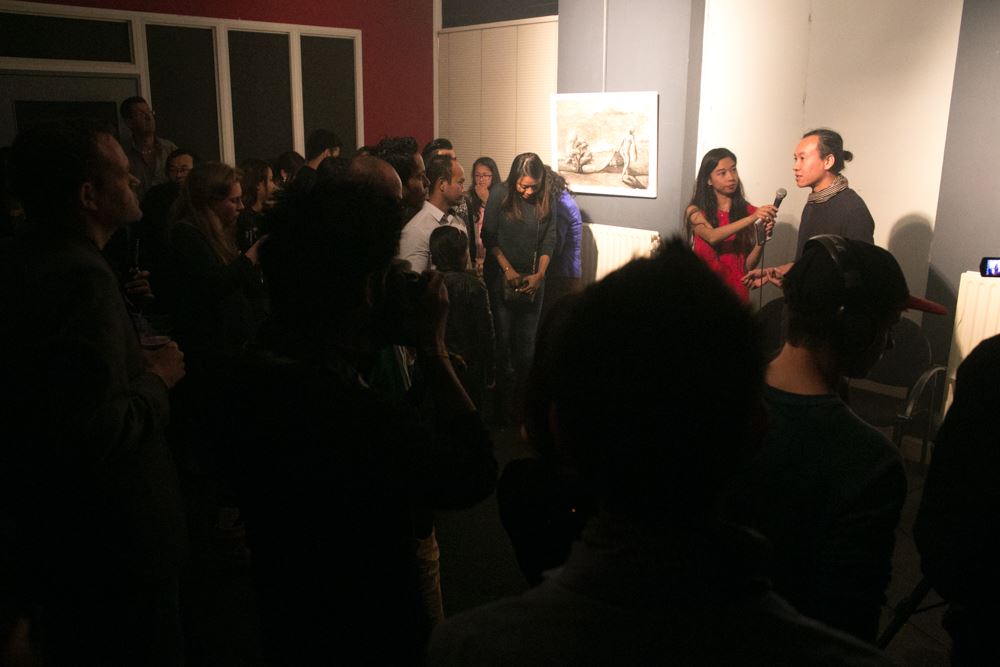 I met fellow Steemiter @chhaylin through organising this party and he's become a really great friend. Here we are where he is explaining his bookidea with Cheerted Keo.

I also met Ratha aka Lop Ahtar, pictured below, for the first time. I visited him and his uncle Sina in Oss to try and get an idea of what had happened to the first Cambodian family ever to have been accepted by the Netherlands. I also met our superstar in rising Kosal Yith that night (also pictured!) 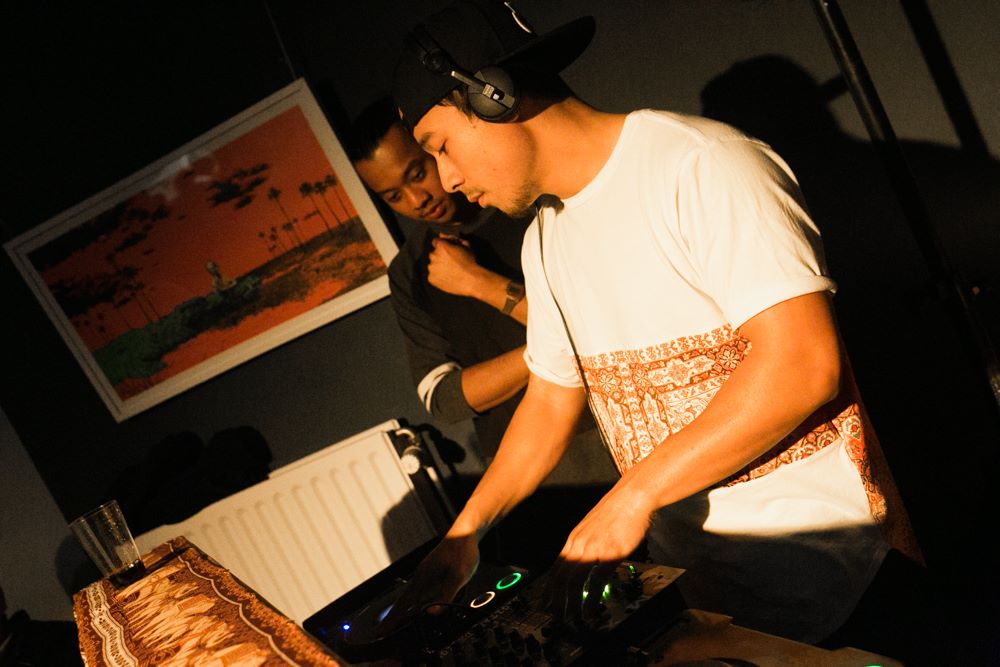 Kimheang and her fam did the catering and did such a fantastic job, providing everyone and especially the crew with homemade delicious and healthy Khmer soulfood. Checkout her catering services, really on point. The beautiful Belgian born Sophie Thekla Ek came all the way from London (and also brought her aunties, uncles and kids) and created a new soundpiece for this event.

And our photographer who exhibited a beautiful and intimate photoseries and forever best friend Settia Tin pictured below as I interview her about her reasonings to do photography. Right now she has her own company called Hello Baby focused on birth-photography. Charlotte Jacobs and Belgian born Sam El Srei were really a foundation in the organisation of the night by moving, ticketing and supervising and being amazing human beings + also @rasowi3113 coming to supportKim and myself.

AND TRULY mindblowing were the attendees!!!

Mums, dads, uncles, aunties, supporters of the artists and usicians but ESPECIALLY those who were curious! I know I met you for the first time @chanthasam where you said you wanted to do a play, and I saw that you were there too @sinzzer and @rouer66 !

And @Chhaylin wrote in his about the night as well in his blog (URL: https://chhaylin.wordpress.com/tag/ik-dans-de-roamvong/). One of the things he wrote that I thought was striking was how the first generation reacted to the party.

An heartfelt speech by me, followed by Kimberly's impromptu speech and love!

I had an amazing night, so much fun. So blessed to be alive :)

Apart from it being such an important night for myself personally, I met so many amazing people who became my friends (you know who you are!) and still two years later I am meeting and getting to know more wonderful people in our community - roamvong is a gift that keeps on giving.

Also, beyond Roamvong I feel like the community has been shaken up and become so dynamic in the last few years - it's unfolding so beautifully in front of our own eyes and I am so blessed to be able to witness it.

All the intiatives I have seen are so GREAT! To name a few: the language class by Keo Vithol, the associations created in Breda and in Oss and all the dance and entertainment groups that have developed out of these platforms (I see you @chanthasam!) and how they engage with the Western public, AngkorNL as a youth event, Khmer pop up restaurant by Sonny and so forth and soooo many more I can't name them all.

Thank you, from the bottom of my heart :)

Best post ever! Wish I could vote many times on this post. GEWELDIG !! Sam, thanks to you we could make this possible all together. I'm glad the community is making progress since then and I'm looking forward to more changes within our community.

THANK YOU big time for your love and just for you being you. We need more people like you in this world!

Much love and hugs!

Great post, and yes me and @rouer66 were there for sure.
I think that was the first time we met?

It was bro! whoohoo !

i saw many people there for the first time, it was like.....
WTH did they came from :)

One of my focuspoints were to invite Cambodians to participate in the event (to help, perform, or to think along the concept) who kept themselves aloof from the Khmer community because they had been discriminated against because they were their own unique self. For instance, I contact Wichet Seav from Deventer, who has been a band manager for almost a decade to look at the program planning, even though he couldn't make it to the party himself. The same goes for Temy who performed - he is the youngest son of the first Khmer couple to have ever settled in the Netherlands. They had both explained to me they couldn't identify with the Khmer community or events that were being held and to involve Khmers like them was part of my idea.

Well it was a smart idea, to bring people together who normally dont see each other.
Why not doing it again but then a steemit party :)

Does that mean, we can forget your invitation in Antwerpen? :)

I stopped organising parties (too much of a hassle) and unfortunately those parties were more to practice DJ'ing and sharing music. It had none of the magic, nor effort or intention of Roamvong, which was fine. My heart is in ideas about the community, I realised, and I wish to rather create work around ideas of society and community rather then organising parties for the sake of parties :)