“A lot of the dreams that [Huxley] had 100 years ago are actually coming true now,” according to Emilie Baltz. What would it be like to experience music through smell? In Aldous Huxley’s dystopian 1931 novel Brave New World, the writer imagined such a device: a “synesthetic instrument” that he called a “scent organ.” At New York’s Panorama Festival, the New York-based artist and experience designer Emilie Baltz brought Huxley’s vision to life in her installation The Dream Machine–with a twist.

“Huxley is looking at how do we experience the future, and he invents all of these magical things,” Baltz says in a video about The Dream Machine. “One of them is a scent organ, where you can play and there are arpeggios of thyme and cinnamon and lemon, and then disgusting flavors as well. I read that, and thought, oh! We’re in the same place now in culture.”

The scent organ is one of several types of high-tech entertainment in Brave New World, meant to give pleasure, numb pain, and squash any sentiment against the status quo. The organ, Huxley writes, plays:

“…a delightfully refreshing Herbal Capriccio—rippling arpeggios of thyme and lavender, of rosemary, basil, myrtle, tarragon; a series of daring modulations through the spice keys into ambergris; and a slow return through sandalwood, camphor, cedar and new mown hay (with occasional subtle touches of discord—a whiff of kidney pudding, the faintest suspicion of pig’s dung) back to the simple aromatics with which the piece began.”

Baltz’s version of Huxley’s scent organ has brass horns mounted around the edge of a pentagonal platform. While Huxley’s vision was simply a passive instrument, Baltz’s is more interactive. In front of each horn is a bicycle pump that produces a sound, a smell, and a light display all representing an emotion. For “contentment,” the sound of cow bells accompanies woody, musky smells with mahogany-colored light. “Disgust,” appropriately, smells like bodily fluids with a backdrop of fart noises and brown light. For “liking,” there’s a vanilla smell with a tinkling sound and yellow lights. 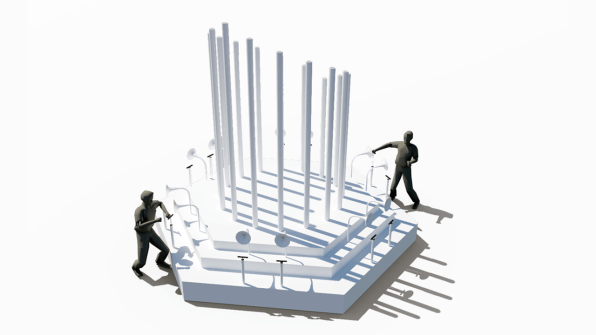 The sounds are produced by a combination of a French horn and a trombone–when people push down on the bicycle pumps, they quite literally pump scented air through the instruments. A pressure sensor then translates the force of their pumping into a sound and light show. In order for it to work, both human and machine have to work together. When they’re all pumped in unison, the installation releases a jet of fog and triggers music from the surrounding speakers that turns the room into the perfect stage for a dance party.
“In the context of the Panorama Festival, this my ode to a vision of the future of experience where feelings are fun, the whole spectrum of human emotion is embodied, and we can play with it as a collective–regardless of race, background, gender, class, or skill,” Baltz tells Co.Design in an email. The Dream Machine was part of The Lab, where New York artists displayed installations using technology as part of the Panorama Festival. Next, it’ll be on display at the New York coworking space New Lab, and Baltz hopes to take it on tour. 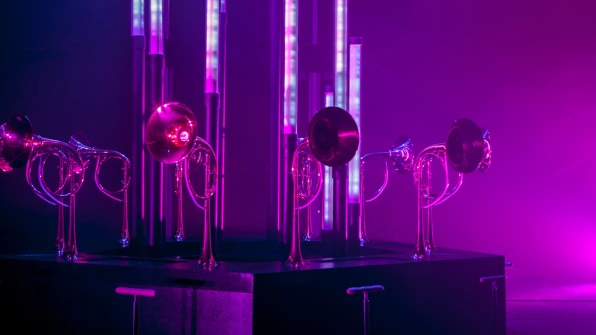 “A lot of the dreams that [Huxley] had 100 years ago are actually coming true now,” she says. “We can make them. The Dream Machine is my dream of how I wish humans to act in the future–through all their senses, by playing together.”

Katharine Schwab is a contributing writer at Co.Design based in New York who covers technology, design, and culture. Follow her on Twitter @kschwabable. More