Daily Jokes from SydesJokes for 1 Jan 2018 Artificial intelligence is no match for natural stupidity!

A husband was scolding his blonde wife for constantly leaving her keys in the ignition of her car.

"I do that because if I take them out, I lose them," she explained.

"Well, what if someone steals your car?"

"Oh, that's okay. I always keep a spare set in the glove box!"

Q: Why did the Leper go back into the shower?
A: He forgot his Head and Shoulders.

Three gays were talking about their perfect reincarnation. The first one says, "I'd love to reincarnate in a mirror and see all those handsome men shave in the mornings."

The second gay guy says, "I wish I were underwear so I could rub my face in their dicks and asses."

The third gay guy was thinking of something better to say, and replied, "I'd love to an ambulance. I would love to have three or four men stuck through my behind at a time and then run through the streets of the city shouting, 'Ooha-ooha, ooha-ooha, ooha-ooha'."

A wife and her husband attended a very important business party thrown by her boss.

On the way home from the party, the woman said to her husband, "Have I ever told you how handsome and sexy and totally irresistible to all women you are?"

"Why no," said the husband, deeply flattered.

"Then what the hell gave you that stupid fucking idea at the party?!" she yelled.

The two old coots were both only a year short of retire- ment from the assembly line, but one Monday morning that didn't keep Joe from boasting to Manny about his sexual endurance.

"Three times," gasped Manny admiringly. "How'd you do it?"

He woke up feeling like a million bucks, pulled on his clothes, and ran to the factory, where he found his boss waiting outside for him. "What's up, Boss?" he asked.

"I've been working for you for twenty years and never been late once. You aren't going to hold these twenty minutes against me now, are you?"

"What twenty minutes?" growled the boss. "Where the fuck were you on Tuesday and Wednesday?

Q: Why are babies good at soccer?
A: Because they dribble! 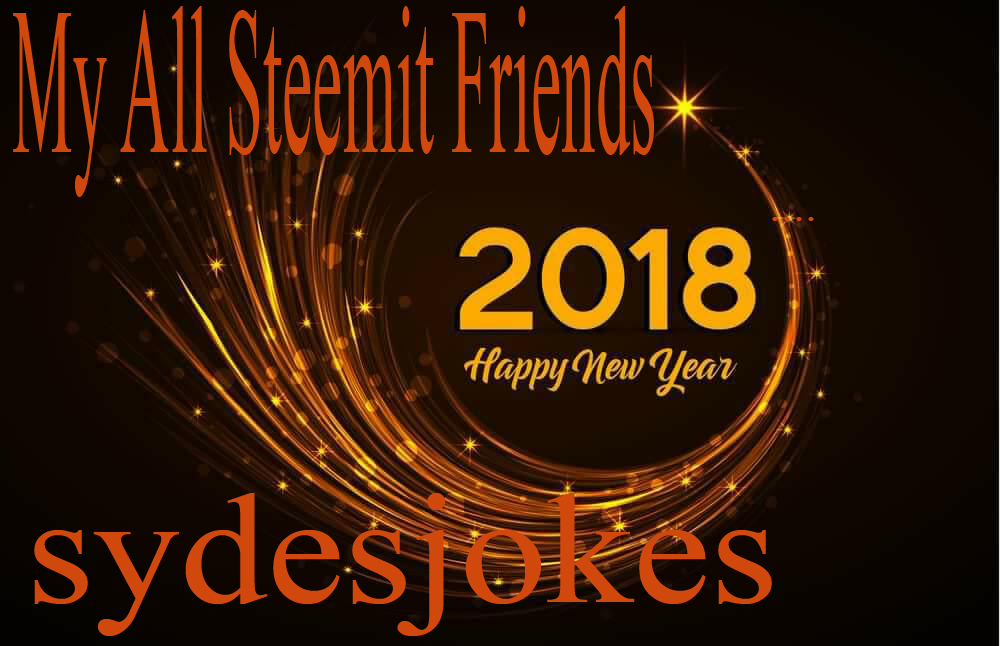 Love the typical blonde joke they always crack me up :):):):)

new year and new goals @sydesjokes the cryptomonedas are the future ..

your jokes are very unique...

Thanks for support during 2017

Laughter is the best medicine! :) Thank you @sydesjokes !

happy new year my dear friend.wish you joy of your life @sydesjokes

haha the last one was so good :) happy new year guys

AI seems to be one of the harder tech to adjust with. I wonder if this joke remains joke and not something scary :D

Funny XDD. I wish you Happy New Year 2018 and good luck in everything you do. i didnt kno last one. haha

This post has received a 1.04 % upvote from @drotto thanks to: @gsari.

Loved the humour, jokes cheerme up all the time.

an interesting joke, the more we laugh because something is getting healthier this life

Joke 4 was my favorite this time! Great way to start off the New Year with some laughs!

Joke 6. funny but don't understand what happened at the party.

The woman has lost her mind. Very funny.

hahahha......nice joke. babies are good at soccer because they dribble keep sharing @sydesjokes

i not know about resteem but i do your this post, andvote have a nice day "Artificial intelligence is no match for natural stupidity!"

Brand new quote for me to use!
Cheers, happy new year. Why did the leper go into the shower, he forget his head in the shower, this I find amusing, nice post @sydesjokes, keep it up.

Good to start the year 2018 by reading this jokes. lol. Upvoted & Resteemed.