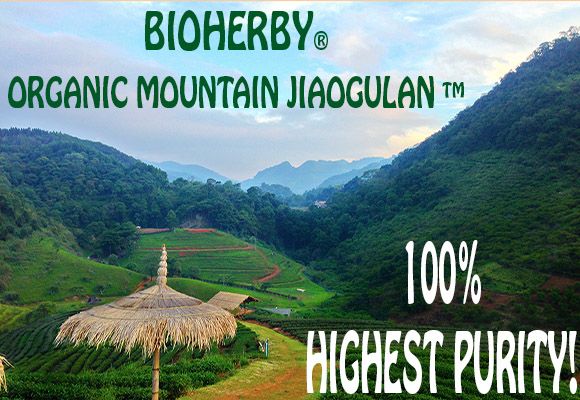 a climber plant that originates from the cucumber family.

This climber originates in China, Laos, Burma and north thailand In China.

Gynostemma Tea is known as 'Xiancaio' what means "the herb of immortality."

Jiaogulan praised as a herb for a long, happy and disease free life.

The inhabitants of southern China who live in one of the highest mountain areas, drinking Gynostemma Tea Jiaogulan instead of coffee for centuries.

People describe Jiaogulan as a drink for general life health. Super boost your energie and it is said that Gynostemma Tea,

Jiaogulan works like a kind of 'rejuvenation elixir'. The stories tell to drink it when you wake up, before going to work and before go to sleep.

According to the myth, less stress is known to one who drinks Gynostemma Tea.

Jiaogulan, Gynostemma Tea was largely unknown outside this remote mountainous areas until the early 1970s.

Researches found that, In these regions (Guizhou, Guangxi and Sichuan) where Gynostemma Tea, Jiaogulan is consumed, an extremely low number of cases of cancer, dementia and other diseases occured, and an abnormally high percentage of people over 100 lived there.

This is published in an article in the Guangxi Daily newspaper. At the time of publication of this article, researchers became very interested in Jiaogulan.

The Chinese government put together a team of the best researchers from the Chinese Academy of Medical Sciences to to conduct a large-scale investigation. The scientists looked at genetics, climate, nutrition and many others additional factors to be able to figure out why exactly in this provinces the number of 100-year-olds was extremely high.

Their conclusion was that many of these hundred-year-olds, consumed 'a different kind of tea'. The locals called this tea, the Immortality Tea, The Chinese researches called it Jiaogulan and the latin name is Gynostemma Penthaphullym.

Further research on Jiaogulan over the past 40 years shown so many benefits for your health, it is very difficult to believe..

But there are numerous references from scientists and more than one hundred scientific studies supporting these statements.

The health benefits of Jiaogulan are due to the extremely high content of a certain substance known as saponins. Saponins, are a special group of secondary plant substances that belong to the glycosides molecule.

It is suspected that the plant produces Saponins as protection against insect pests and against growth of bacteria and fungi.

These saponins give Gynostemma, Jiaogulan its adaptogenic and antioxidant properties, as well as the ability to regulate the nitric oxide levels in the body.

NEXT TIME : EXPLAINED PART 2, THE FACTS OF GYNOSTEMMA RESEARCH STUDIES.

Congratulations @bioherby! You have completed some achievement on Steemit and have been rewarded with new badge(s) :