How to Teach Yourself Japanese: A Huge Guide From 10 Years of Experience / Part 1 of 5 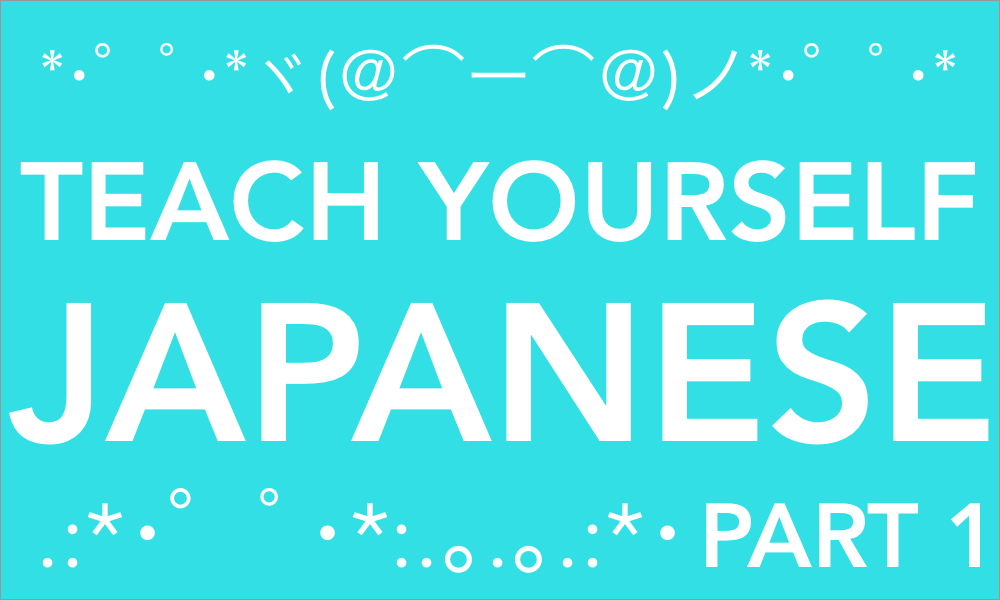 When I had the crazy idea to learn Japanese in 2007, I was convinced that it wouldn’t be possible for me. A couple things made this undertaking feasible and I’d like to talk about what worked best. Most of what I recommend will be free or cheap, so it’s okay if you don’t have money for a college course or something similar.

This post isn’t “One Surprising and Super Secret Way to Learn a Language!” It will take a ton of motivation and dedication to reach fluency, but it is absolutely possible for anyone who puts in the time. The game changer for me was discovering All Japanese All The Time. The two main concepts from this site that changed my way of thinking about learning languages are:

I’ll talk about these below, as well as walk you through the rest of the steps that I took to get to my current level of fluency.

Disclaimer: I would say the highest level of proficiency I’ve reached is in the upper intermediate range (something like B2 on the CEFR scale). I passed the highest (N1) level of the Japanese-Language Proficiency Test (JLPT) in 2012, am able to understand enough of the language to enjoy TV and comics without a dictionary, and can comfortably have conversations with native speakers.

The general idea behind most of the study methods I’ll talk about stem from the idea of “comprehensible input,” which is the idea that while learning a language, the only thing that can improve your linguistic competence is input you can understand.

It might seem counter-intuitive at first to focus on input (like books, movies, etc.) instead of speaking, but it makes sense if you think about it. Our goal is to get all of the words and phrases into your head, and extensive exposure to Japanese will give you an intuitive sense for what feels right. Speaking practice will help bring things full circle, but it won't be the main focus. Speaking the language without knowing it well enough can actually solidify errors that are really hard to correct later on.

Check out the articles on Antimoon for more info about these ideas. Their site is written for people learning English, but the explanations are still really helpful. 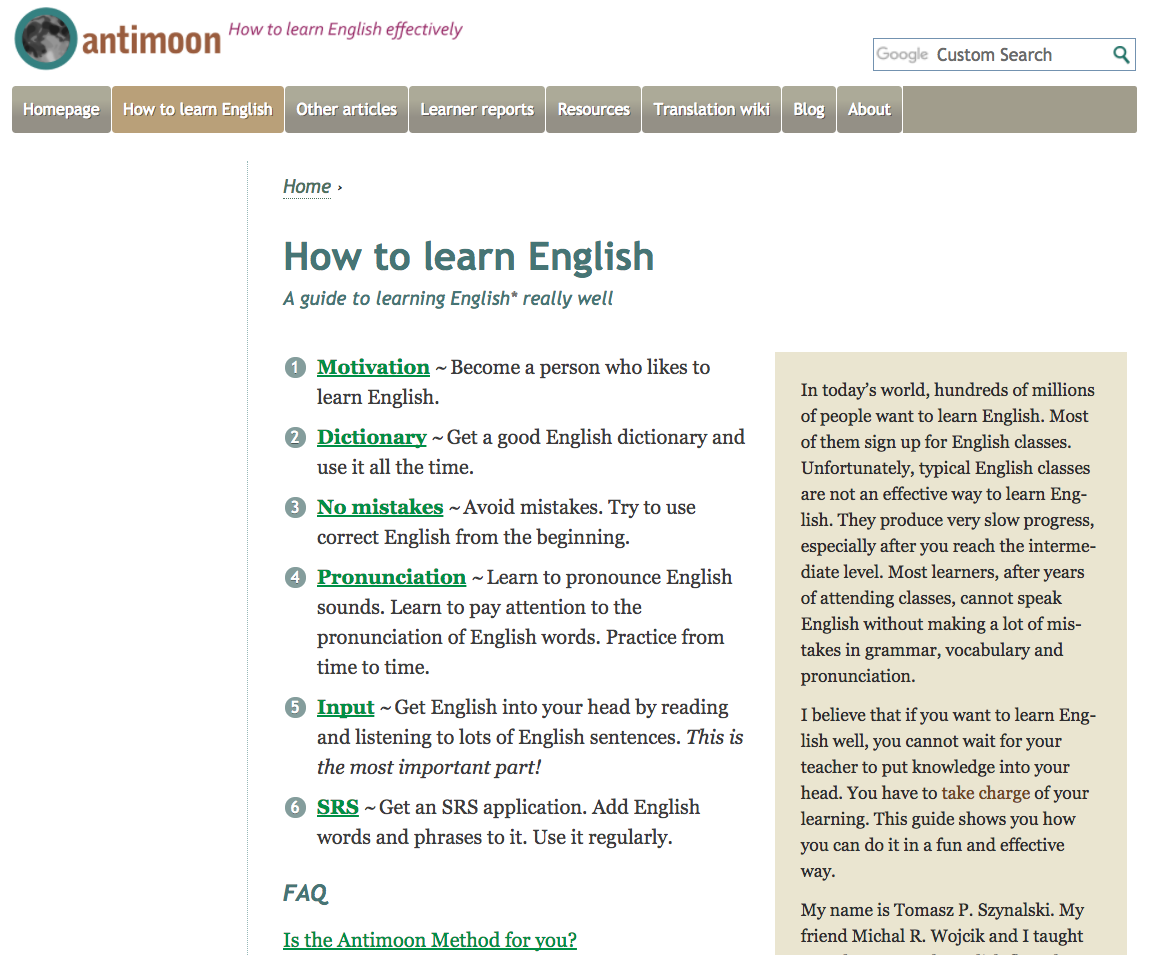 Where do I start?

First, let’s take a quick look at the parts of Japanese we’ll need to learn. The main ones are:

I’ll take a look at each of these in the sections that follow.

Hiragana is phonetic (each character corresponds to a specific sound). So you can read it just like you can read English. It looks like this:

Katakana is also phonetic, but it is mainly used for loan words. It looks like this:

Kanji are the scariest ones. They’re the more complicated characters that are originally from the Chinese language. They look like this:

When it comes to learning to read, kanji will be what makes our lives much more difficult. We’ll need to be familiar with a couple thousand of them to read Japanese. This is where an SRS comes in. 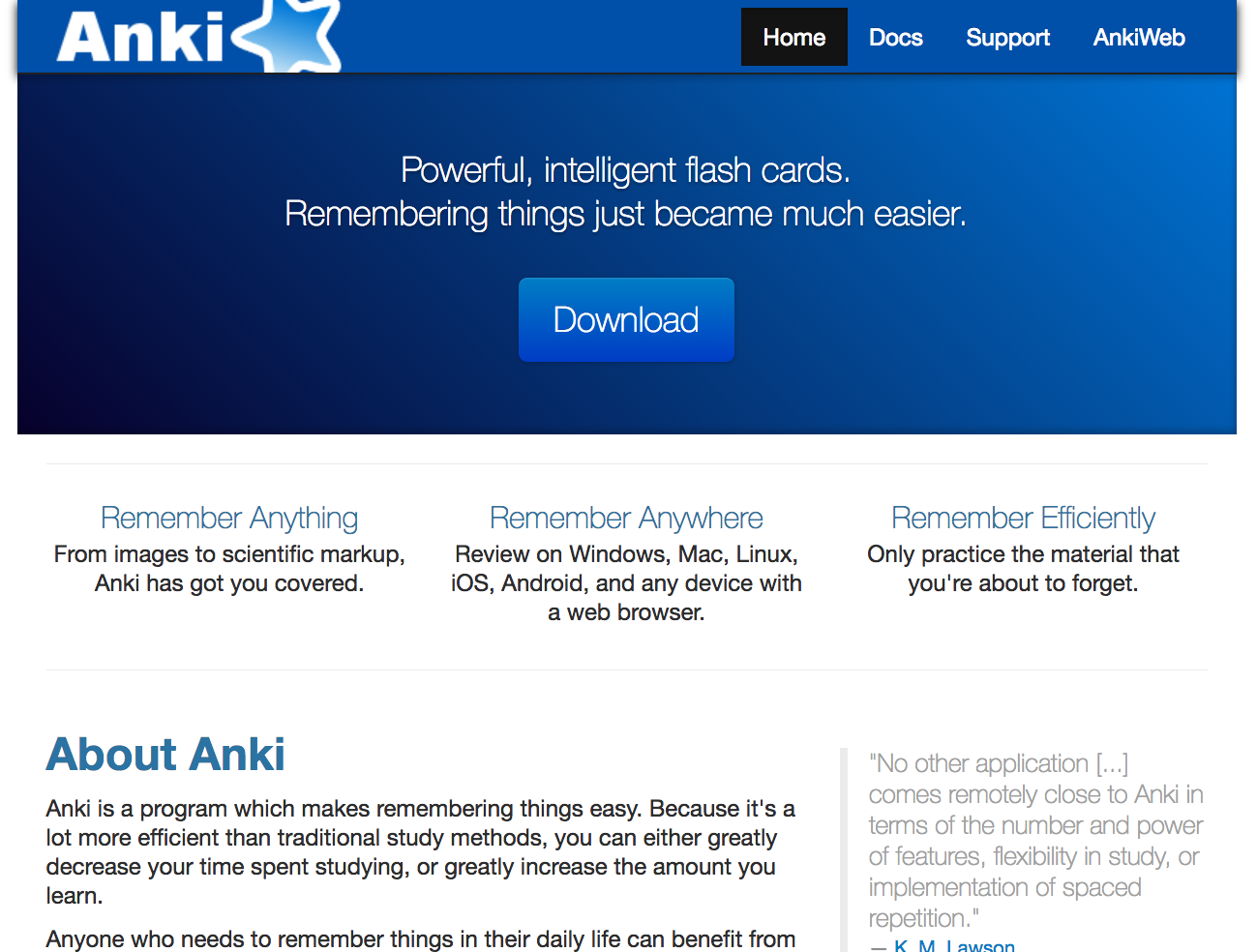 Anki is a spaced repetition system (SRS). You create digital flash cards in it (or download pre-made decks) and then study them in the application on your computer or phone. This will be the main SRS I talk about in this guide, but there are several other popular ones out there now, including Memrise, which is more user friendly but not as customizable. I’ll talk about Anki because it’s the one I have the most experience with and it’s customizable enough to allow us to study in a certain way. As an example, let’s step away from Japanese for a second and say I want to learn all of the states in the US. I can download a shared deck that someone has already put together with all of the states. Here’s what the front looks like: 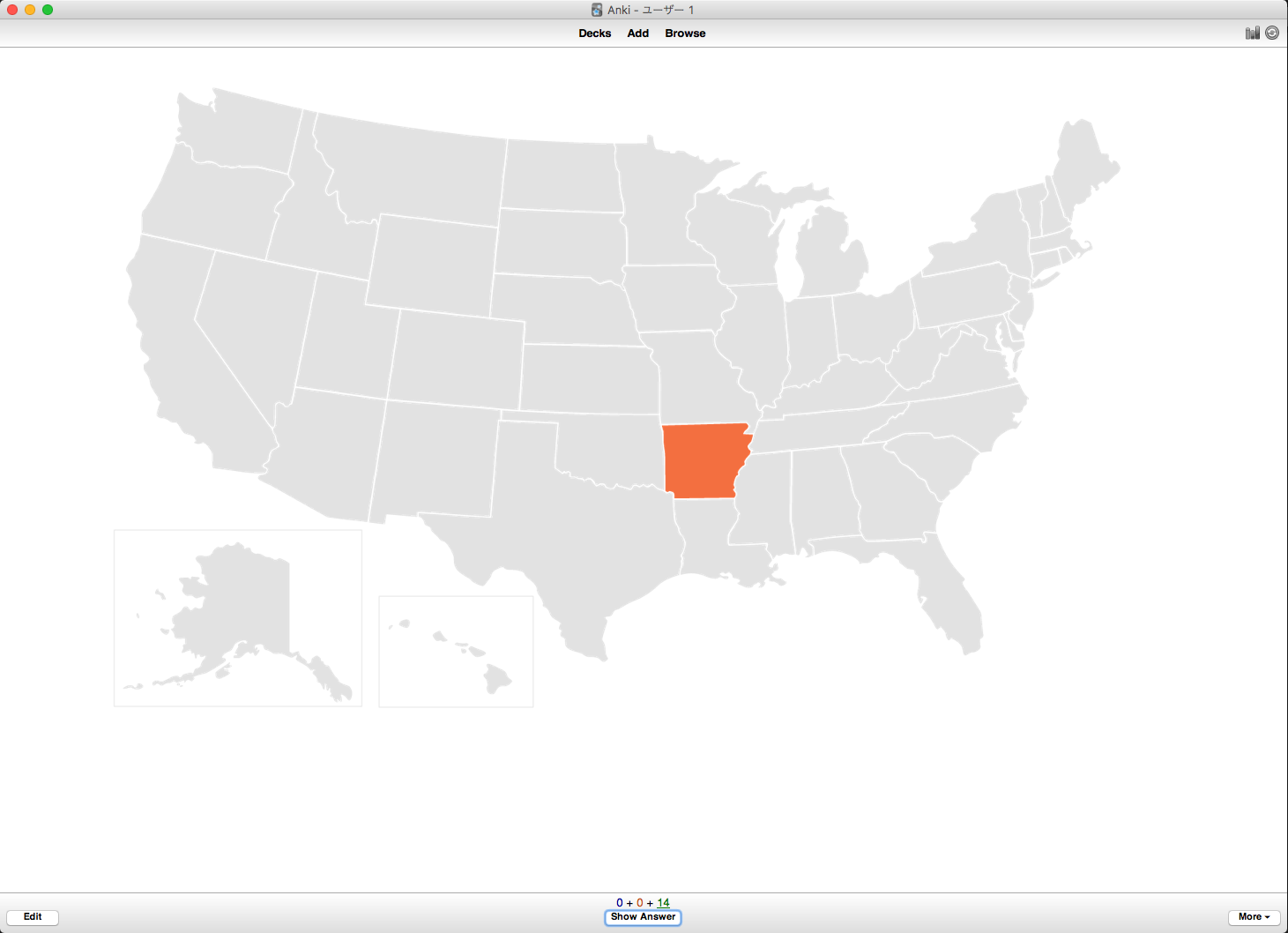 So I look at this picture and try to remember what the name of this state is. Then I click the “show answer” button at the bottom and take a look at the back… …which shows me that it’s Arkansas. At the bottom I have four button options: “Again,” “Hard,” “Good,” and “Easy.” If I forgot the name of the state, I pick “Again.” If I remembered it, but it was tough to recall, I pick “Hard.” I choose “Good” if it felt just about right, and “Easy” if I had no problem remembering the answer.

This is where the magic of Anki comes into play. Based on how easy it was to remember the answer, Anki will schedule (based on the learning curve) a review for the flash card sometime in the future. If you forgot the answer, you might review it again in a few minutes. If it was really easy, you might not see the card again for a few months or even years.

Anki helps make the process of learning thousands of small pieces of information much more streamlined and efficient. This is how we’ll learn thousands of kanji, and thousands of Japanese words.

And that’s it for part 1! In part 2 I’ll talk about learning the kana (two phonetic Japanese alphabets) and kanji.

Please let me know in the comments if you have any questions!

I wish I could learn Japanese but really no bandwidth for now to explore it, I did learn some useful phrases when we visited last year but I couldn't understand replies in Japanese, lol.
Thanks for sharing, could be really useful when we decide to visit Japan again.

Thanks for reading! Yeah understanding the replies is really tough :P That's cool you learned some phrases for your visit though. I hope you find this series helpful when you go back!

This is a fantastic series! I'm bookmarking it for later because I have way too much going on right now to add another project...

Thanks! I hope you find it helpful :)

#japanese tags can be used only when you can read Japanese texts.Your post is different so please only #japan.

I'm sorry about that! I didn't know it was only for posts in Japanese. I tried to change the tags but it looks like I can't remove it from the Japanese category now. I will make sure not to use it in the future!

No you did not know, so nothing bad.Enjoy steemit this too;D

That doesn't really make sense to me. As an outside observer, the #japanese tag seems like something that's perfectly suitable for this post as it talks about the Janapanese language in English and the actual word "Japanese" is in fact in English.

It would have been much better and less confusing if the content that was in Japanese was tagged with #jp much like the conetent in Korean tends to get tagged with #kr. I think that's a better system and would allow for people to tag their posts meaningfully as this post is not really about Japan but exactly about the language.

Of course, people are not going to change their behaviors just because I want to be pedantic about it, but still felt like sharing my two unsolicited cents on the matter.

This is such a helpful and well-organized breakdown. Looking forward to seeing parts 2-5. Anki was a big help for me in learning German! Thanks for that rec.

Thanks so much for the kind words! And really glad Anki was helpful for you -- it's definitely a powerful tool!

The multiple versions of written Japanese seems like it would make life extremely difficult for a non Native speaker. German is written pretty much like it is spoken, and it's related to English so I imagine it must be considerably easier to learn.

After getting a basic knowledge I found watching DVDs where I could switch from English to German, or watching TV series dubbed in German was a very good way to get the feel of the language, and learn "like a child." With repetition it starts to seep into the brain ;-)

I hope your posts encourage some people to learn Japanese, and I hope you do some bilingual photographic posts of your experiences.

Yeah, kanji in particular are what makes the language difficult to read in the long run. You can actually learn the other two alphabets in a few days -- it takes a few months to become comfortable with them, but it's not too bad overall.

I'm actually going to talk about learning from TV series in one of my posts! It is such a great way to study. And actually one of the things that made me believe in their effectiveness was meeting people in Germany who spoke perfect English and had learned primarily from watching American movies and TV shows :P

Thanks for the comment! I would love to do some posts with pictures when I'm able to return to Japan for a visit!

It's amazing that you have managed to achieve something like this. I used to be an English teacher for adults and a lot of the people that were taking courses were people who had tried to learn it on their own and failed. Pretty much everybody that tries something like that fails.

It speaks a ton about your dedication, consistency, character and resourcefulness that you managed to achieve something like this! I'm actually blown away!

Thank you so much for the very kind words! I would say that I've failed multiple times and given up, but in the end I just love learning Japanese so much that I always end up coming back to it :P

That's great! Once you can consume content in it, it is bound to only keep getting better from now on.

Congratulations @jeffbernst, this post is the fifth most rewarded post (based on pending payouts) in the last 12 hours written by a Dust account holder (accounts that hold between 0 and 0.01 Mega Vests). The total number of posts by Dust account holders during this period was 14500 and the total pending payments to posts in this category was $5866.01. To see the full list of highest paid posts across all accounts categories, click here.