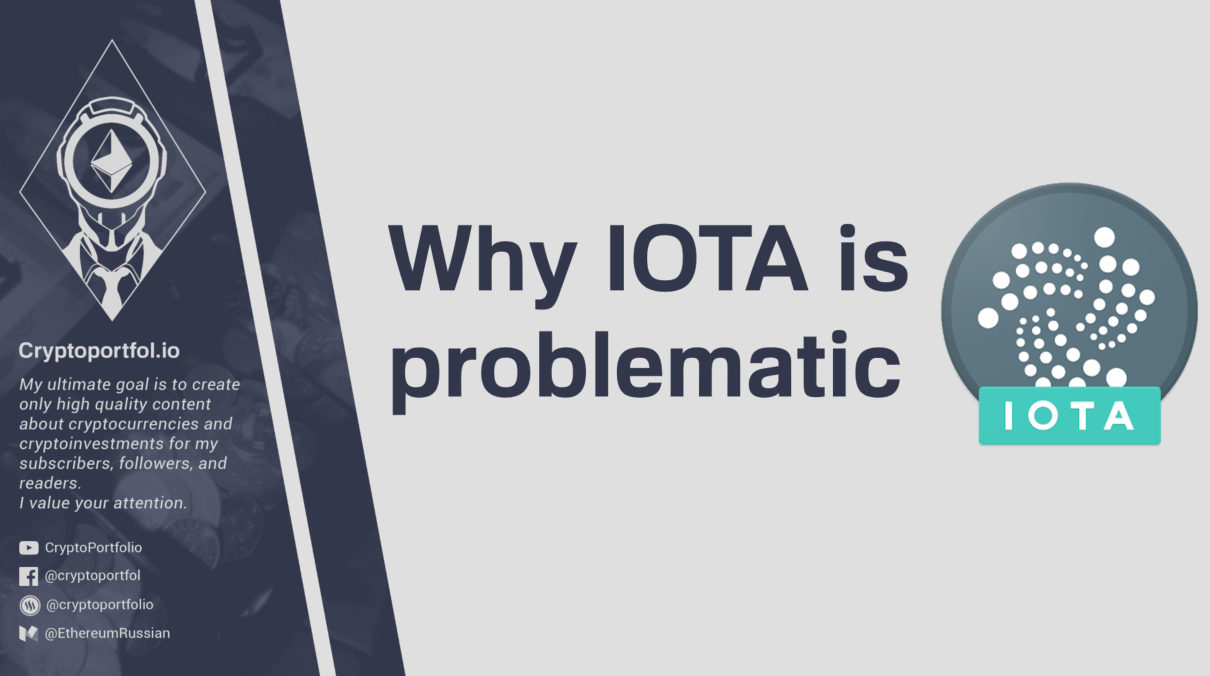 In current market conditions, it is especially important for investors to understand the main pros and cons of their investments. That’s why now I want to talk with you about the main cons of the IOTA cryptocurrency. I need to start by saying that I always stand for the innovation, but without the sacrifice of security. And IOTA seems to be very interesting crypto with unique “tangle” technology for IOT devices, but this project doesn’t seem to cater to blockchain investors who are more interested on benefitting from holding the cryptocurrencies. It is also vital to mention that IOTA is not blockchain, so it already has a big minus in my mind.

As far as I can see, this “tangle” technology brings more harm than benefit for the consumers, investors, and developers. And now I will explain to you why I think IOTA is a problematic investment and that you should think twice before putting your money into this cryptocurrency. Let’s start with the overall description of IOTA. IOTA is a cryptocurrency which was designed for the Internet of Things. Like freezers, toasters, cars, well, anything that is connected to the internet. For example, your washing machine can order needed supplies from the internet when they are needed.

IOTA is made to be feeless, but in reality each participant needs to do small POW to create transaction.

It has no mining, no blocks, no transaction fees. IOTA is made solely for IOT usage, not for usage as a currency. 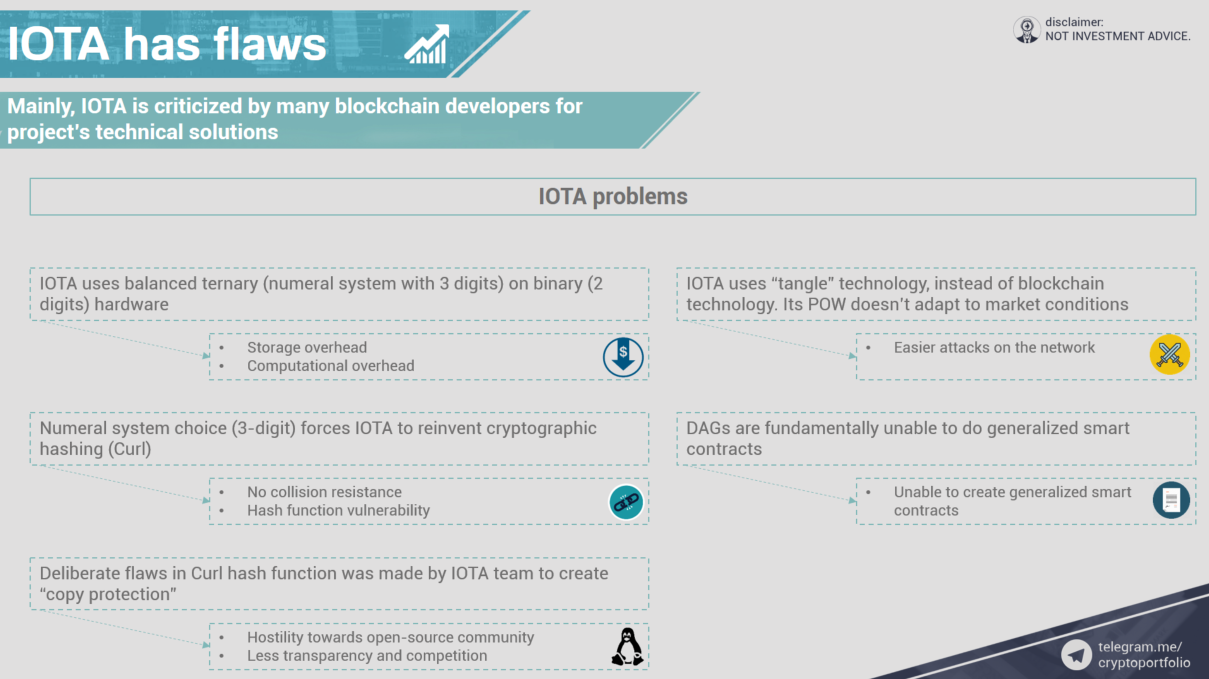 First of all, thanks for the material to Nick Johnson from Ethereum foundation ( https://medium.com/@weka ) and the guys from reddit.

IOTA uses balanced ternary (numerical system with 3 digits) on binary (2 digits) hardware. By doing that, they needlessly overcomplicate the system design. Even though, theoretically, ternary processors are more efficient and certain mathematical constructs are more cleanly represented, the real consequences of this numeral system lead to inefficiencies. One of the consequences of such a system is storage overhead. The other consequence is computational overhead.

Deliberate flaws in Curl hash function was made by IOTA team to create “copy protection”. It is portrayed by many blockchain experts as the hostile behavior by IOTA team towards open-source community. It all leads to less transparency and less competition in the sphere where IOTA operates.

IOTA uses “tangle” technology, instead of blockchain technology. It creates a new range of problems. Mainly, it concerns the security of IOTA tangle. Be sure to check the whole post of Nick Johnson for more information.

Finally, DAGs are fundamentally unable to do generalized smart contracts. It all happens due to the fact that IOTA doesn’t recognize the transaction order. It's so annoying to not be able to find your videos here.

Blockchain and tangle have fundemental difference. It doesn't mean that it is inferior tech

So, what exactly are the problems you see with IOTA?

Slightly higher storage and processing requirements? Both negligible, considering the benefits of ternary for the future.

Regarding the "rule" of cryptography. This would mean that no innovation is allowed at all? This is BS.

The "bug" that may or may not have been deliberately introduced? Any software has bugs. Bugs get fixed. Another question is the moral dilemma, whether you are allowed to protect your "open source" project by any means until it matures. It is not a valid argument, whether the technology works.

As of DAG not be able to do smart contracts. Do your research. They announced timestamps a few days ago. This is an intermediary step for smart contracts. Why do you think ETH devs have started a FUD campaign agains IOTA?

Iota is utxo based design which is fundamentally flawed for smart contracts.

That's a new one! You mind elaborating?

IOTA is not designed for smart contracts from my understanding. IoT devices can instead pay for services they need. A bit like giving your bots pocket money to pursue 'As a Service'

Why isn't it designed for smart contracts? What hinders it to be implemented? It is already on IOTA's roadmap.

It seems like you answered your own question there. Its not implemented yet.

Not implemented, yet, and not designed for are two different things.

internet of things can't be broken.... because it's not even created yet. Yes, it's in the process of being created. Unless you have credentials, other than hearsay, Wait for the creation and final product before you complain about it being broken. Better yet..., Join the forces to do better good for mankind. Learn and educate yourself.. help others educate themselves. If you want to be stuck in a financial system as we all have now, then keep talking shit. If you are truly trying to help the world advance towards better things, then write something worthwhile. Be a pioneer. Work with the technologies that ARE going to create our future. Just don't sit there writing things based on bits of information that you're gathering from here and there.

Bad explanations for dumb people, you are doing it right! :) LoL

somehow its funny to watch all these Tom, Dick & Harry web-crypto-"experts" spreading fud about IOTA, while at real world big players like Bosch, Volkswagen, Innogy, Foxconn ... already cooperating with IOTA. This IoT-future is unstoppable - and in a few years no one gives a sh.t to lame, bloated blockchains and their moldy fanboiz.

UD is good :) but this post is full of logical faults, bad reasoning and misunderstanding of technology.
"in a few years no one gives a sh.t about blockchains" - More than few years :)

BTW after all those "don't roll your own" bs, Zcash rolls their own as well. HUMANS...FUCKING FACE PALM!

Have fun with the army of IOTA fan boys... they are some of the most vicious and protective out there!

@cryptoportfolio you are the man for exposing scams like VERI. Any great Financial Analyst knows how to independently verify for themselves what the crowd does not see. IOTA has massive security issues and we appreciate you pointing this out in great detail. Nearly every great developer in the blockchain space has come out against IOTA not b/c of competition but b/c it has critical security flaws that go against cryptographic consensus mechanisms. Thank you Dan!

If the security issues are so massive, I wonder, why there hasn't been any equivalent of the DAO on IOTA, yet? 🤔

The DAO hack was a smart contract breach of the DAO only. It had nothing to do with the Ethereum core protocol. IOTA concerns many cryptographic experts b/c its not full consensus many times over like blockchain + Raiden or LN will allow very cheap transactions in the future. EOS and Steem are also "free" transactions. Apps will be built for IOT plugin to use with ETH, NEO, EOS and other Blockchain based systems. The problem with IOTA is its not secure and there is little advantage over off chain scaling. Any blockchain can do IOT in the future not just IOTA like its branded.

If it wasn't secure then it could be hacked. There is a 1.6 billion dollar bounty. And yet no funds have ever been hacked. No, IOTA is secure, more than any blockchain. You just swallow the FUD and don't look beyond surfaces.

Wow, an article full of baseless FUD. I would expect you to do some research instead of repeating misinformation. How disappointing.

"Finally, DAGs are fundamentally unable to do generalized smart contracts. It all happens due to the fact that IOTA doesn’t recognize the transaction order."

The Tangle already has time-stamps, so this is just wrong. Smart contracts are in active development and just around the corner. It's very understandable why Ethereum fan-boys would be shaking in their boots. They are still implementing PoS which the IOTA dev CfB invented years ago.

You can see the timestamps here: https://iota.readme.io/v1.2.0/docs/the-anatomy-of-a-transaction

Wooow, thanks so much for this correction and clearing things... Was confused at some point...

"By using a ternary number system, the amount of devices and cycles can be reduced significantly. In contrast to two-state devices, multistate devices provide better radix economy with the option for further scaling. Therefore, establishing multi-state ReRAM for non-volatile memory opens the door to novel storage and in-memory computer arithmetic options."

Please support your statements with proof rather than giving your views on IOTA. Please do your homework @cryptoportfolio

Great analysis as always. Seems like the hype about it this week is it being added to another exchange? Binance?

I think there are problems and potential at IOTA. Because the problems are very mathematical, they are very difficult to assess. However, if such a system works, the possibilities are unlimited ...
Thank you for your post!

Also, all the issues you are rephrasing here for the n-th time had been very adequately and professionally responded to and addressed by the IOTA team, just so you are aware.

So then stay away from it and let the people who do get it do their job. I'm seriously getting sick of this new age breed of foam-in-their-mouths "traders" and "investors" that haven't got a clue what they're doing or talking about...

If IOT tech explodes as expected, and IOTA establishes itself as the main crypto for IOT....then it will literally go to the moon, forget your market caps, the IOT market potential is enormous, puts others to shame, eventually encompassing trillions of transactions per day and be worth be tens of Trillions of dollars.

this post is so amazing, I'm so inspired to keep working hard on steem.

what inspired you? factless nonsense? or the big words you don't understand that shares the ideology of taking partial facts, and using the tidbits of information to create a story that you think that wanted to hear?