Current availability of interactive technologies infrastructure such as internet bandwidth, increased processing
power and connectivity through mobile devices at affordable
costs have led to new concepts related to human living. 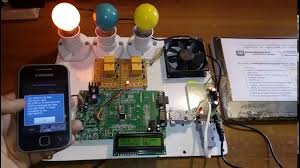 Smart
cities, smart life and internet of things etc. are few such evolving
research domains. A prominent concept among these is ‘Smart
Home’, which involves automation and interactive technologies.
This paper proposes a multi-functional ‘Smart Home Automation
System’ (SHAS), where users can use voice-commands to control
their home-appliances and gadgets, for different functionalities
and purposes. The proposed system can be adapted to a user’s
voice and recognise the voice-commands, independent of the
speaker’s personal characteristics such as accent. The system is
aimed to be cost-effective, flexible and robust. The voice command
recognition is achieved using a dedicated hardware module and
an Arduino micro-controller board for commands processing and
control. Performance evaluation is carried out by developing a
multi-functional miniature prototype of the SHAS. Results of the
experiments conducted are quite promising. The prototype SHAS
can be used for converting existing homes into smart homes at
relatively low cost and with convenience.
Keywords: smart home automation system, voice-command
recognition, multi-functions, multi-sensor, voice-command
I. INTRODUCTION
A smart home is a home that provides its residents the comfort, convenience and ease of operation of devices at all times,
irrespective of where the resident actually is within the house.
A smart home usually consists of electrical appliances such as
lighting, fans, air-conditioners, room-heaters, air-coolers and
microwave oven etc.; and electronic gadgets such as television,
computers, audio systems, laptops, music-systems and mobile
devices etc. All these appliances and gadgets can be connected
and controlled remotely, over a secure channel using WiFi or internet through software application, from within or
outside the house. A smart home consists of three elements:
(i) internal home network, (ii) intelligent control and (iii)
home automation with wired/wireless access gateways. These
systems and devices within a home can also be managed either
from inside home, or can be linked to services and systems
from outside the home [1].
These appliances and gadgets are generally connected to
specific sensors, so as to make these automatically adapted
to certain situations and in-turn make the occupants feel
comfortable. An adaptive smart home would be the one that
[978-1-4673-6540-6/15/$31.00 c 2015 IEEE]
utilizes machine-learning techniques to discover patterns in
the residents’ daily activities, and generate automation rules
and actions that mimic these actions [2]. Once these systems
become aware of the requirements of residents, the residents
can then be provided with a better living experience, by
predicting their future needs and perform routine tasks. The
aim would be to reduce physical movements and labour by the
humans, by sensing and proactively responding to their needs.
This important application domain is predicted to steadily
increase in the future [3], [4].
In recent years, more research on smart homes has been
carried out in applying the principles of ubiquitous computing.
A smart home adjusts its functions as per the inhabitants’
needs, according to the information it collects from the residents, home computers and context. In such an intelligent
environment the steps involving the information processing
and network technology are transparent to the user. Interaction
between the smart home and its devices here usually takes
place via advanced ‘natural’ user interaction techniques involving human-speech [5].
An essential part of a SHAS is to enable the various electrical devices and electronic gadgets in it to interact and communicate with each other. In SHAS, simple remote-controlled
systems to complex computer/micro-controlled home automation technologies and different wired/wireless technologies
may be used for this. Few widely used wireless technologies
with globally accepted standards are: GSM, Wi-Fi, NFC and
Bluetooth. These can be used to communicate with the smart
electrical devices via smart mobile devices such as smartphone
or tablet [6]. A SHAS can make use of multiple interactive
technologies such as voice-recognition, gesture-control, retina
eye movement and more.
In this paper, we use voice-recognition to control smart
home appliances. Moving away from the traditional methods
such as keyboard or switches to control the devices, voicecontrol is one of the easiest methods to give input commands.
Also, voice recognition is a more personalized form of control,
since it can be adapted and customized to a particular speaker’s
voice. Voice recognition differs distinctly from speech recognition. In speech recognition the subject of analysis is the spoken
text, while in voice recognition the subject of analysis is the
voice of speaker and the spoken text remains secondary here,