lalithamonisha (50)in #introduceyourself • 5 years ago

Hello fellow Steemians! My name is Lalitha. I grew up in a small city on the island of Borneo in Southeast Asia, but I now live in Kuala Lumpur, the capital of my country. 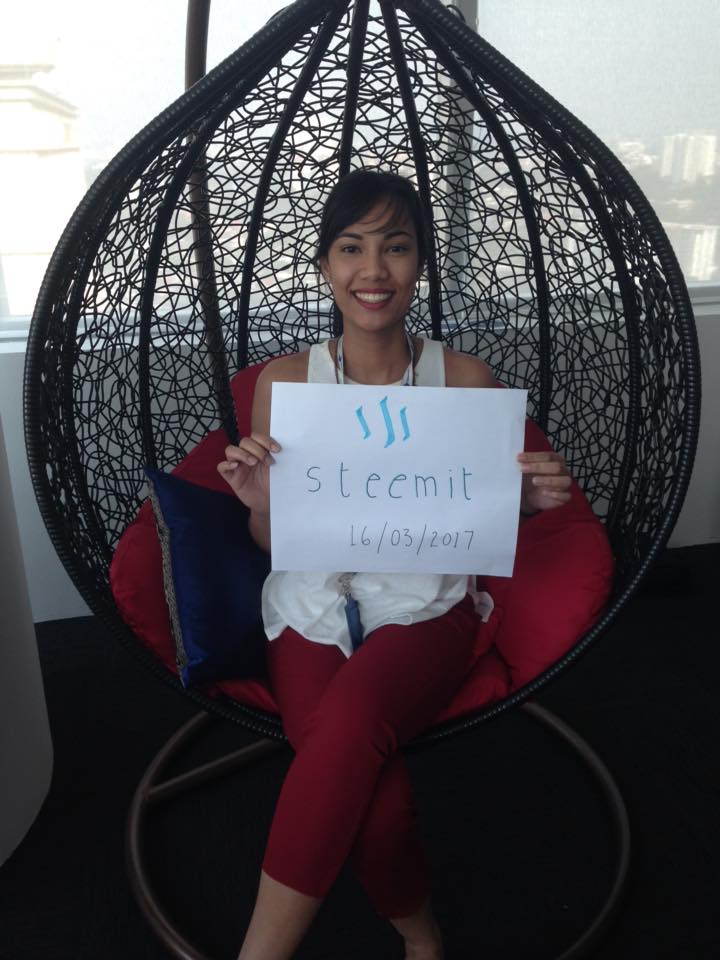 A friend, @kevinwong, introduced me to Steemit when he was sharing with me stories of his travels to Amsterdam for SteemFest, where he was to meet the trailblazing folks of the Steemit community. My interest was piqued the moment he mentioned, “paid for writing” and “mostly made up of anarchists”.

I must admit it took me a while to muster up the courage to post something up, even after having created an account for so long. I’ve shared my reasons for hesitation with him previously, but I've come to realise that I’d definitely regret not joining more than I would doing so.

Growing up, I was surrounded by beaches and books. And though a little child I was then, already I knew, in my young heart, that I somehow was a little different and a little too free-spirited for my own good. I bought my first techno CD when I was 12, though I had zero comprehension of or appreciation for its musicality back then. I just felt compelled to be part of a subculture I hardly understood. My mum once told me, as a toddler, she once tried putting ribbons in my hair as she was dressing me up – I tore the ribbons off the minute she put it on. Painstakingly she tried again, only to be met by little Lali’s tiny fists of fury. I guess I wasn’t a very obedient child to begin with. My Indian dad and Chinese-Filipino mum (both doctors, strait-laced and strict as hell - bless their souls) raised me with many of the traditional values you’d find in an Asian home, but with perhaps one rare exception. They taught me to question life and everything inside and around it, and to seek the answers I craved out for myself. That is why I will forever be indebted to them, despite the multitude of rattan whacks and belt whips they've ever delivered to my rear end. They sowed in me the beautiful seeds of autonomy, freedom, and independent thinking when they taught me to seek the truth.

I enjoy reading, writing, creating music, experiencing, and exploring. I’ve worn many hats in life – many gawdy, awful hats, but also some really fun and refreshingly unassuming ones. I’ve been a comedy theatre performer, a TV presenter, an accidental beauty queen (more on this in future posts), a nearly-lawyer and a PR consultant. I was also part of a funk rock band in Australia that disintegrated after one pub show- though our Facebook page lasted a good five years.

There’s much about the world and about my own self that I have yet to discover. Much of my life journey remains shrouded in mystery. For now, I’ll just take one step at a time, hopefully going in the right direction by following my heart and paying attention to the universe’s signs.

I really am looking forward to sharing my musings on Steemit, and hopefully in the process I'm able to contribute some form of value to the community. Thanks for taking the time to read this - till the next post :)

Welcome to the community it's a pleasure meeting you "so to speak" There are some amazing people here and I believe you will be quite satisfied with your experience on Steemit.
I do wish to thank you for signing up though and hope you rake in the Steem.
Thanks & praise.

Thank you @viktorcapulet, it's been a pretty amazing past 36 hours. Thank you for the welcome. Peace and love.

“mostly made up of anarchists”.

@anarchyhasnogods, aye but capitalism and anarchy can go hand in hand - in its purest form, both systems advocate for the supremacy of natural law in a free market above all other man-made laws, and both schools of thought favour voluntary exchanges :) very similar to Steemit!

Anarchy is the absence of all unjustified hierarchy

and guess what this pdf shows?
https://www.marxists.org/archive/marx/works/download/Marx_Wage_Labour_and_Capital.pdf

anarchist capitalists are as anarchist as christian scientists are scientists

welcome and greetings to Borneo. was there last year with my girlfriend. it's really nice there.

Thank you @blocklab. It's an island of untouched and undiscovered treasures.

You're awake at this hour!! haha. better late to the party than never...:)

You should so totally soak up Steem and the cryptocurrency game and start a youtube talking about all these stuff like Amanda B Johnson :)

Steemit does indeed need its own Amanda B Johnson! Lot's of work in the PR area to be done.

@kevinwong @igster a friend of mine who trades stocks for a living wants in on this Youtube idea. He says "we may need to learn a thing or two about video editing..." lol. Am considering the idea.

Yes. Check out Amanda B Johnson's stuff for Dash coin on youtube. We need more crypto personalities! And not many around, and adoption is still considered super low.

You know, STEEM's price went up 4x now, since the day u joined. You're the lucky star :)

Hehe, everything takes practice and one has to start somewhere. Good luck if you decide to give it a try!

AND welcome to Steemit! and yes @kevinwong is a legend!

@kevinwong is a legend on here - we all love him. But for now we welcome you to Steemit Lalitha. Please do post like a mad minnow on here and have fun :) If you need any help, then just shout for me! ... (I'm in Scotland! ... a long way off!)

Thank you for the warm welcome @mindhunter (though from a relatively cold part of the world)! I'm still not super familiar with the platform, but I'll try my best to catch up with all the terms and technicalities soon :)

Don't worry, I see your reputation is rising already. Soon you'll know all the terms within a week! Good luck.

Welcome to steemit @lalithamonisha. Best of luck to you. You are already off to a great start!

Welcome to Steemit! It truly is a unique and awesome place!

Nice of you to join us here. Since you write, you can participate in the 50 word story contest for new steemians for an opportunity to win big. The contest runs on @literature-trail, so check it out.

thanks @ogochukwu! Just checked this week's one out. Thanks for pointing me in the right direction!

must be nice to receive $40 + f0r your very first post. You are a cutie so I can see why. Let us know here if they take away some of your rewards for having too much as this Whale experiment is in play.
The most I was up was close to $17 then they left me with only $3 wow!
Congrats on making it here by the way, nice to see a new lovely face ;)

You get paid in FULL in 16 minutes not fair! You see how they did me! they took most of my rewards 3hrs prior. Wow!!!!
Well, enjoy that - Congrats ;)

Welcome to Steemit! A path is laid by placing one stone at a time.

I look forward to your musings ^_^

We welcome you. Have fun!

Welcome to Steemit @lalithamonisha ..upvoted you and following.

I understand that you have strong desire to express your (welcome) emotion. Although it's good to welcome new users, other people can do it well. Next time would you please vote with less weight, so I don't have to downvote and perhaps leave a bad taste in their mouth? By my whale definition, 25% or a little less would be OK for you. Thanks.

Be loyal to your innermost truth. Forgive those who are not; as they do not know the way. - 8888

Thus is his presentation "About"
Oops! He is the only one to know the truth!

Thank you for your advice I will take it under consideration brother.

Too bad you showed up late to the party. People were getting $3000 a few months ago for posting a picture with a steemit sign.

Hola glad to see you here..

Welcome to Steemit! I look forward to hearing more from you.

Welcome to Steemit! I hope you enjoy your time here... it is a really nice community with lots of good people. Not all anarchists, mind you... there's pretty much every possible persuasion here, although independent thought does tend to run strong here!

Pleased to meet you. Following you to hear more.

Welcome on board :) I'm going to follow you purely for "tiny little fists of fury", it suggests a writing style that I'm going to enjoy XD

Thank you @ryivhnn! I've been told my sentences are too long, and my writing's a little flowery, it's good to hear a compliment once a while :)

Whoah! Welcome to Steemit. We hope you are successful here.

Hello Lalitha, welcome on board!
Good to see that Kevin brought you to the platform, everything he told you about it is true :-)
Enjoy your time! Following you for future posts

Welcome to Steemit, Lalitha! You'll have a great time here. :)

Welcome to steemit - great introduction, sure you enjoy and glad another lady found her way here!

@uwelang lol, you make it sound like it's a sausage fest up in here haha. I've seen some pretty cool chick profiles and some great content written by them. We're not a different species! :P

lol - I know some great writers here and love to see more and more - no different species - are you sure :-)?

Welcome to Steemit @lalithamonisha! I wish you a great time here and let's power up for 30 days! Cheers!

We are glad to see you with us!

Welcome. I am new too. I like your writing.

Welcome to steemit from the neighbouring country, Singapore.

I'm follower of kevin too and has FOLLOW you.

Welcome to Steemit!!! :-) Enjoy the platform

Thank you @sthumacher! there's much to learn and absorb and enjoy!

I look forward to hearing more from you. You are refreshingly open and free and a good communicator too. Welcome to Steemit!!