The Social Experimentalist - An introduction

dannyshine (65)in #introduceyourself • 4 years ago 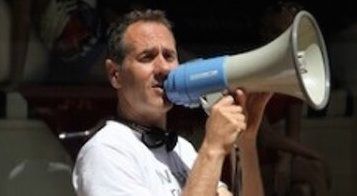 WARNING: This content can be ADDICTIVE! If you like SATIRE, MISCHIEF, SURPRISE and QUESTIONING AUTHORITY you're in the right place.

For the past 8 years, I have been creating unusual 'situations' in public, often with the help of a megaphone, many of them filmed or recorded and posted on Social media. Followers on Youtube have reported that they can be up all night watching the films!

My primary weapons for facilitating the ongoing great awakening (in myself and others) are satire, humour, disobedience, and questioning authority in whatever form that takes, from Police and security personnel, to council employees, corporate management and headteachers.

What have I learned from doing this?

Primarily, I have learned that humour is a very powerful weapon when sharing truths about serious issues.

I have also learned a great deal about law and its enforcement. I have had more contact with the Police in the UK than anyone I know and have learned a huge amount about law, politics, economics and psychology on the fly whilst doing this.

I have learned that the master ASKS the question and the slave answers them. This is why the authorities try and monopolise the asking of questions. So I now play games with people who assume authority and the rules are simple. Whoever answers a question first is the loser. Try it yourself! It's not an easy game to win! Especially with people who have been trained in Police 'training school' to be the one asking the questions!

I question the use of labels although sometimes those labels can help, so long as they are not limiting. In other words the following labels that have been used to describe what I do are not exhaustive or even 'true!' They are perceptions, mostly from others, of what i do.

It has been called:

Most of what I have done so far has fallen into three categories.
(1) Megaphone in Public spaces
(2) Matrix Hacking Phone calls
(3) Interviews, often with random people

Having watched some of the films, or even witnessing it in public, what would YOU call it?

I do it for many reasons, including a reaction to the experience of not being heard as a young person. Primarily though, if I am honest, I do it because it is one of the most exciting, enlightening, fulfilling, creative, connecting and challenging things I can think of doing.

Although of course not all of the feedback I receive is positive, the films are clearly appreciated by many. Some simply enjoyed watching. Others have watched films with children or even grandchildren and helped them connect. Some say that watching the films has changed their perspective and even affected major choices in their life. I invite you to share your experience.

In fact the person who is helping me with STEEMIT is living in Bali - @samstonehil - says that the films helped him extricate himself from the Matrix of control that has so many of us stuck. His gratitude speaks for itself in the intro post he created for me here.

Why am I joining Steemit?

I will write a separate piece on the many reasons for joining steemit.

Briefly though, it feels like it's time to move away from Corporate and Government control and let blockchain technology help us cooperate and collaborate and share the rewards rather than let the parasitic class (most of us are parasites - its systemic) grab all the spoils of our creativity.

I want to encourage a community of truth seekers and creatives to move over to steemit and support each other in sharing our talents and being rewarded for it as well as learning about cryptocurrency and blockchain. This platform encourages us helping each other.

But it will only work if we invest a few hours of research into blockchain technology and in this case STEEMIT and how it works.

And it's taken me a YEAR to do that. Do you want to wait that long?

Can't wait to hear from you!

Took me a while to get on this, but I'm here now.

More power to you all... The critical thinkers, The conscientious objectors, The smilers at strangers, The lovers, The brothers, The sisters, The promiscuous huggers and The tellers of uncomfortable truths ; )

Hey my odd family, how are you all doing :D

welcome! I just upvoted you for your cute comment which is worth about 2 bucks!!

Primarily, I have learned that humour is a very powerful weapon when sharing truths about serious issues.

As a critical thinker, healthy rebel & a formidable questioner of everything and all. A truth seeker and a reckless sower of high consciousness through the always undervalued weapon of humor myself. Among many other extravagant attributes which I hold and exercise in all its splendor all the time.

I will say, we are kinda twin bros of a different mother my esteemed @dannyshine. And for that same reason you've just gained a new follower.

A real pity that at the moment, I am not able to watch & enjoy your videos and films. Due to my currently bad situation of proper internet access over here in my, by now, declivous country.

But I hope to watch all of them in short and even more, also try to sprinkle a lil bit of more humor in the comments section of your irreverent posts. }:)

What a great introduction!!!

Hey brother... nice to see that we joined this site around the same time... shared synchronicity or some such... I've followed your work for years... It's good that you vids will be here for posterity's sake... You may also want to upload them onto Dtube, which is a Steem-using vid site... you know, for when the Google overlords try to shut down your Youtube presence :)

working on that now!

I'm not familiar with your YT/FB post/videos. But im glad you be following you here!

Pretty awesome to have you on board here - great personality - like your Facebook action, following you @dannyshine

Glad to see you on here. I've watched a few of your videos over the last few years and really enjoyed them.

As an answer to your question, I think I would call what you do just some good old fashioned public speaking, haha.

Great to see someone here who knows Danny's work already!

Onward and upward we all fly together 🙏🏻

I'd be surprised if there aren't a few more people around here who know about Danny already.

Nice video... I think to get used practise listen to British accent.

welcome to STEEMIT, Danny! Nice to see people standing up to "wake" people up a bit, and do so in quite an "entertaining" fashion as well... lol

Hi Danny, I have enjoyed watching your stuff for a long time , in fact posted many of your clips on Facebook. Since I am in the church of perpetual astonishment your clips always are a most entertaining "sermon' and bring out a heightened sense of astonishment with a smile . Love it. So welcome on Steemit it. Sam Stonehill actually mentioned you and I am most pleased to see you here. Have up voted you and follow you...keep it coming. We shall not cease to be amused!!

Delighted you're here Danny!! I've been inspired your approach for many years, and I know most your wise words & videos; stored in from my inspirational-memory-banks. What's really going on? And selling inner peace for 50p. EVERYTHING IS OK. Steem ON Brother!!! I've pushed all the buttons to promote ya!

Thanks. Great to finally be a Steemian if thats what we're called!

OMG I am so happy to see you here on Steemit mate! Followed, upvoted and resteemed with so much pleasure! Great work! =)

Nice to meet you, @dannyshine! Welcome to the Steemit Community, wish you good luck and a good start, ive send you a small tip and followed you, hope you have an amazing day! :)

Thanks for the warm welcome!

Great to see you here Danny. I am Sam's mother!

He's cool. And I like your name! How you getting on with cryptocurrency?

Sammy suggested that I invest in Bitcoin when it was at $900 so I'm getting on rather well with it currently!

I don't know you, but I hope you're having a wonderful day : )

Best wishes to you and your family,

Welcome to Steem @dannyshine. Your article sounds very interesting and unusual. I will make time to re-visit and watch your videos.

every device are greats

welcome from another newbie ;)

Welcome to the greatest platform in the universe 😄 I discovered you by following @samstonehill's posts, and I am glad I did. I love these creative ways you use to question authority.

For me this is real entertainment! I choose this over any brainwash television program any time. I just subscribed to your youtube channel, until you are on Dtube, so I can catch up a little on your videos.

Keep up the good work mate, looks you aren't living life through the ego, authentic means real to me, you have got my support.
See you soon brother

Thanks. Really looking forward to being involved.

Looking forward to hearing more from you!

Congratulations @dannyshine! You have completed some achievement on Steemit and have been rewarded with new badge(s) :

Look who's here ^^ @Dannyshine, I'm just here to leave a nice Hello ^^. Unfortunately i don't have much voting power, but i will be back and vote my followers. Need to grow a little ^^. Have a great time @rightuppercorner

I only skimmed this, I have to read this very soon... thank you for sending me the link!

Upvoted! Following you now
see ya around

I think social experimets should be illegal since it's mainly manipulating people.

We manipulate the world everytime we step outside our front doors. It's unavoidable ...every interaction we have, whether explicit or tacit, has some effect.

Here's a social experiment you could try. Simply smile/nod at complete strangers : ) Just the simple act of passing recognition can make someone feel less lost, less invisible, less alone in the world.

Great Stuff! We need more people like you in this world asking the right questions and not being afraid to take ignorance head-on! Love your work and your YouTube channel so keep up the good work!

Wahey, Danny its good to see you here mate. I regularly watch, share, interact, comment on your content. I love what you do, have already followed you here and hope to see a lot more. I would love to have a chat about some stuff soon too mate.

Welcome to Steemit. I think youre going to fit in well.

Look forward to seeing more of your Social Experimentation

I've got to order a megaphone and try out your techniques! Shine on!

Hi danny, finally found my steem password again, glad to join you all over here, check out my profile for some poems and a pic :) one love, peace out

and it made me chuckle when you turned up on the hyde park video and poured out the tango when they were doing the tan ceremony, priceless :D

Loving your stuff. Always interesting to watch what is next. Keep up the good work!