allangraves (59)in #introduceyourself • 4 years ago

Well....hello!
l heard about steem from my good friend @kommienezuspadt and thought that sounded like a really cool concept so here l am.
l'll start with a bit of an intro of who l am and what l like to do,
lm a tattoo artist that enjoys horror 24/7! 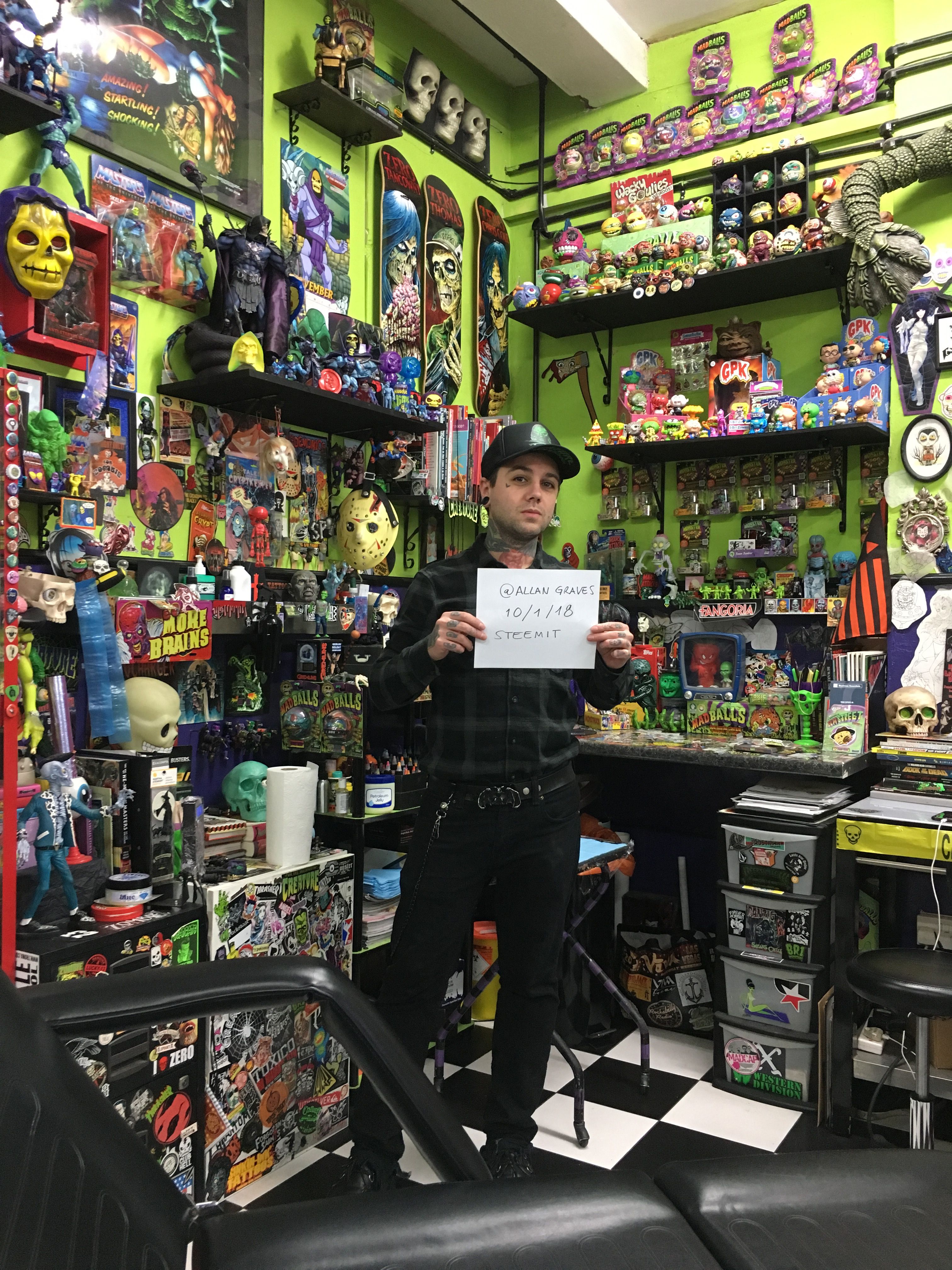 l grew up in Barcelona and from a very young age knew that l wanted to move to London.
l was the kid drawing monsters at class, l didn't know if there was something wrong with me or this was normal as all the other kids were out playing football and such, l was not; l was interested in reading horror comics, watching horror films and collecting monsters..and drawing,drawing and more drawing..! That led me to pursue a career into the arts of illustration, but l discovered tattooing and fell in love with the subject.
and since all l wanted to do when l grow up was monsters l thought of combining those two themes so l did! (here's an example of my tattoo work, excuse the ink on my client's nails haha)! 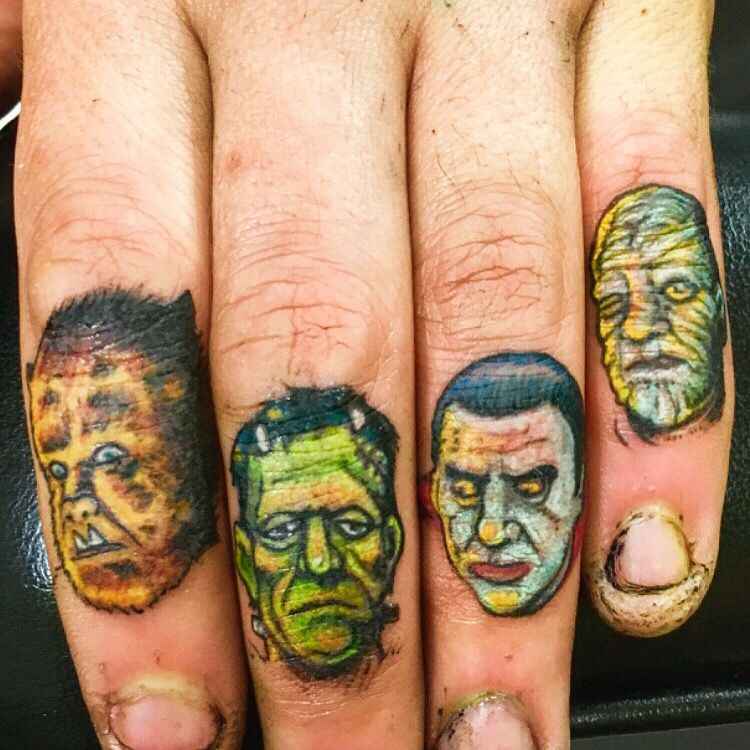 that was 17 years ago..now l own a horror themed tattoo shop in London(UK) and travel the world with my beloved girlfriend @dressedtokillyou attending horror conventions and doing guest spots at friends shops worldwide. Welcome man. Turns out you are not weird in any way. You are just special. Looking forward to future posts. Followed :)

Hahaha happy to see it turned out on the good way!
And yup l´ll be posting tattoo stuff and some other horror arts stuff l do too 💀

Welcome dude! I am sure you have all the makings of success on here!
Can't wait to see more!!
Followed!

Welcome! Happy to see some more horror themed art showing up on here!

Thank man,yeah l’ll try to post some of my art quite often,younhave some cool stuff too! 👍

Good photos, I am a photographer, it passes for my blog and sees my content, I hope that it should be of your taste, :D greetings

Thanks so much! I’ll check it out for sure :)

Wooo I love those monster finger tattoos! I am an admirer of tattoo art but don't own any of my own yet...I doubt my reserve will last much longer haha.

I am a fan of horror movies, but I do not spend much time watching tv/movies so there are often popular ones mentioned that I haven't seen myself, but know the plot from being around other horror fans that spend more time on the couch haha.

I just watched The Wailing a few weeks ago and really dug it, have you checked that one out? Korean flick about murders and a mysterious illness. Available on Netflix right now

thanks for the kind words!
I haven’t checked the wailing yet but is on my list.. ;)

Those cuticles are looking ghastly!
Jokes aside, nice work. If I get a tattoo ever, it will be something like this.

it is an incredible job that you do, I welcome you and I will be following you because I admire the work of tattoo artists ... I hope to one day become a tattoo artist too :)

Thank you very much! And good that you think of becoming a tattoo artist one day,keep drawing and work hard and everything is possible! 👍

On February 3 I started my intensive tattoo course, I had wanted to do it for some time but for economic reasons it was impossible, thanks to steemit I could pay for it hahaha

welcome to steemit, your tattoos are great

You're welcome to steemit. :)@allangraves

Congratulations @allangraves, this post is the third most rewarded post (based on pending payouts) in the last 12 hours written by a Dust account holder (accounts that hold between 0 and 0.01 Mega Vests). The total number of posts by Dust account holders during this period was 10605 and the total pending payments to posts in this category was $4038.57. To see the full list of highest paid posts across all accounts categories, click here.

Thanks you and not,not at all!
I like to hear stadistics,and lm happy you found out my post was 3rd! :)
So please keep those comments up!
👍

Welcome my friend! So good to have you and @dressedtokillyou here!

Thanks for help me out man!

thanks for showing @britleigh steemit and inadvertently showing me Great to have you here! @kommienezuspadt also showed me Steemit.

thank you! yeah it looks like a cool place to be :)

Hello @allangraves, so nice to come in contact with your work! I am a big lover of horror as well as nice art work so I gave you a follow. Can't wait to see more from you :)

Thanks so much!
I’ll be sure to post horror stuff often 💀💀💀

Congratulations on making your first post and welcome to our awesome community! @kommienezuspadt was super pumped to hear that you were making your intro post. :) Have fun and good luck!

Thank you! And yeah he was super excited because he knows that me and @dressedtokillyou will enjoy it here :) l just saw your post on getting you new ipad paid by steem,congrats on that! Its rewarding to see when people invest more time on their artistic interests keep on making art! 👍

Thank you so much! I love creating and I’ve been saving my crypto for something of great value. It seemed like a good investment since I will be using it to create more content for Steemit.

I can’t wait to see what you’ll be sharing on your blog and I hope to see @dressedtokillyou posting as well! :)

Wow..! Look so good! Hi i am a photographer in Korea.

Welcome! There is a pretty huge art community here, and I'm sure you'll be a great addition. Those finger tattoos are so rad! Definitely excited to see more of your ink and artwork!

Welcome dear keep it up I am also new on steemit

hello hello friend is a pleasure to welcome you to the steemit community, it is never too late to start new financial alternatives with passion and perseverance for steemit.
regards
do not forget to follow me
I invite you to see my post I know you like it, share it with your friends and family
please give me up vote, reward and comment
we together can help each other

Welcome to the comics community on Steemit, Mr. Graves! Your friend @kommienezuspadt has been on Steemit for awhile. You're fortunate, I wish I had someone like that to ask for advice.

While tags like #art and #drawing are very popular, I'd like to point out that you can find more webcomic creators here with tags like #steem-cartoon and #webcomic . Keep posting!