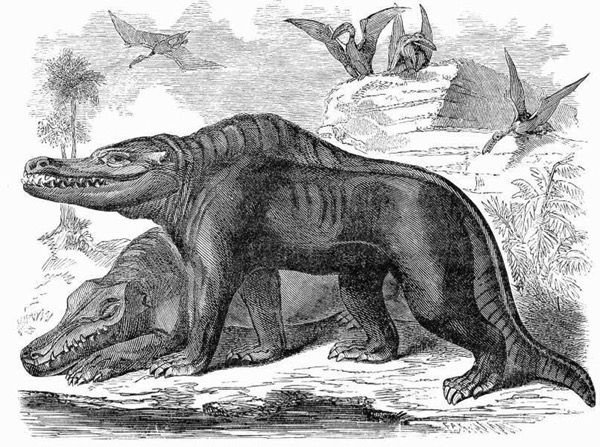 On February 20, 1824 William Buckland published the first data about Megalosaurus, a large carnivorous animal that had part of a lower jaw, some vertebrae, fragments of a pelvis, scapula and its hind legs.

In the following years more remains of animals of similar characteristics were appearing, so much so that Richard Owen realized that they were part of a group clearly differentiated from other species.

So in July 1841, at the eleventh annual meeting of the British Association for the Advancement of Science, held in Plymouth, he presented a report entitled Report on British Fossil Reptiles in which he said:

The combination of these characteristics, some, in fact, of groups that are now distinct from each other, and all present in creatures much larger than any of the existing reptiles, will, presumably, be considered sufficient reason to establish a tribe different order of Reptiles saurios, for which I propose the name Dinosauria.

According to Wikipedia the term comes from the Greek words δεινός (deinos, meaning "terrible", "powerful", or "great fear") and σαῦρος (sauros, meaning "lizard" or "reptile"), and the idea of Owen was giving them a name that would do justice to their great size and majesty.

Whatever the name may be, it seems that Owen did have enough reasons.