GOALPOSTS HAVE BEEN MOVED: Media Pivots from "Russia-Trump Collusion" to "Everything we Don't Like is a Russian Bot"

libertylol (59)in #informationwar • 3 years ago (edited)

We were promised treasonous collusion, but all we got were internet bot farms

The video below is making the rounds on social media and claims that...

Russian meddling is the biggest attack on our democracy since 9-11. Here's how it works and what we can do about it.

The problem with simplified videos like this is that they are able to embed a lot of spin when they apply broad-stroke simplification to a complex issue. The listener doesn't have the time to evaluate each simplified declaration as true or false before moving on to the next talking point. This video is no different.

“If you’ve ever gotten into a heated argument in the comments section of Facebook, chances are you’ve come across a paid Russian troll”.

Really? Half my Facebook friends are Russian trolls since we get in heated arguments all the time?

In reality, Facebook has been extremely cooperative in the handing over of data to prosecute the ‘Russian trolls’. If Russian trolls were the problem, do not doubt that Facebook would have provided extensive, accurate data that would support this claim. The media would kill for confirmation of that narrative, yet no supporting data has surfaced.

Instead, the larger picture could never be more clear.

The goalposts surrounding the Trump-Russia Collusion Narrative Have Moved Again

Looking at the 2016 election, it's interesting to note that their main goal wasn't exactly to help Donald Trump win the Presidency. Russia's bigger goal has always been to create chaos and distrust within American society.

It also, doesn't stop them from lathering their base with hopes of collusion which could still occur.

Why hasn't the collusion message dissipated?

Why isn't this widely reported as a scarlet letter of failure on mainstream media outlets that pushed the narrative so hard for so long? First off, it's a complex story and can't be discussed perfectly in 3 minute soundbites that steer cable TV news segments.

While there are allegations that it was actually the Democrats who colluded with the Russians, there is no concise and perfectly packaged smoking gun that proves so. Hillary didn't directly write a check to the Russians for dirt on Trump.

Without a direct smoking gun, the only outlets that will push the narrative of direct Democratic collusion with the Russians turns out to be Fox News and Alex Jones.

The real crime isn't discussed by any outlets, though.

If I was Carter Page, I'd be looking into a civil suit against the government's wrongful intrusion into my 4th Amendment Rights by politically motivated federal law enforcement officials within the FBI.

Who has influenced the public more? The Russians or the Media pushing a fake narrative?

I have to re-stress this point, there's not yet any evidence to prove any 'collusion' narrative. Indeed, after more than 18 months, the Comey-Mueller FBI investigations of alleged Trump collusion with Russia have come up bone dry. I stand by my previous remarks:

If evidence exists of collusion between Russia and Trump to rig or hack the election, let's get the proof out there and hang him for it.

Instead, the readily apparent media goal is to pack television shows, social media timelines and article titles with half-truth reporting in order to muddy the picture. If you don't really take the time to look into the "Trump-Russia Collusion" narrative, you'll likely just assume it true based on the volume of reporting thrown in your face daily.

What's increasingly apparent is that the Robert Mueller investigation, which was kickstarted in 2016 by the Trump Dossier, has turned into a continuation of the Democrats' failed 2016 political campaign against Trump, with vague insinuations of misconduct or outright criminality but never any proof.

Now that the goalposts have shifted, I urge you to take every opportunity to point out that we were lied to and the media should have zero credibility going forward. How do we go back and tell every person who read the previous list of articles, or quickly scrolled past them in their social media timeline that they were patently false and created with an agenda in mind? We can't. Those people went on living their lives unable to hold an adult conversation on the topic because they've been effectively influenced. We're never able to right the wrong that has taken place.

This is the real crime. Hundreds of millions of Americans read headlines or quickly browsed articles and walked away from that interaction knowing that Trump colluded with the Russians to win the election.

You speak to them around the water fountain and they can't explain why, they've seen no evidence, but it must be true. They are naive to believe the media is pure in it's intentions. They are ignorant to the fact that the media could be complicit in pushing a narrative.

For more, go read Trust Me, I'm Lying: Confessions of a Media Manipulator by by Ryan Holiday marketed as 'the cult classic that predicted the rise of fake news—revised and updated for the post-Trump, post-Gawker age.'

You'll quickly understand that the media is no longer the unofficial fourth branch of government which attempts to check government power with truth. We are all bots on this blessed day! 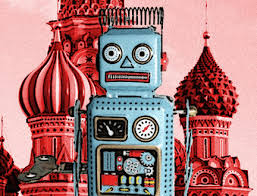 Curated for #informationwar (by @truthforce)
Relevance: Russian Bots!
Our Purpose