This is the New Money. Bitcoin $4,400, AOECoin ICO Coming on Strong. 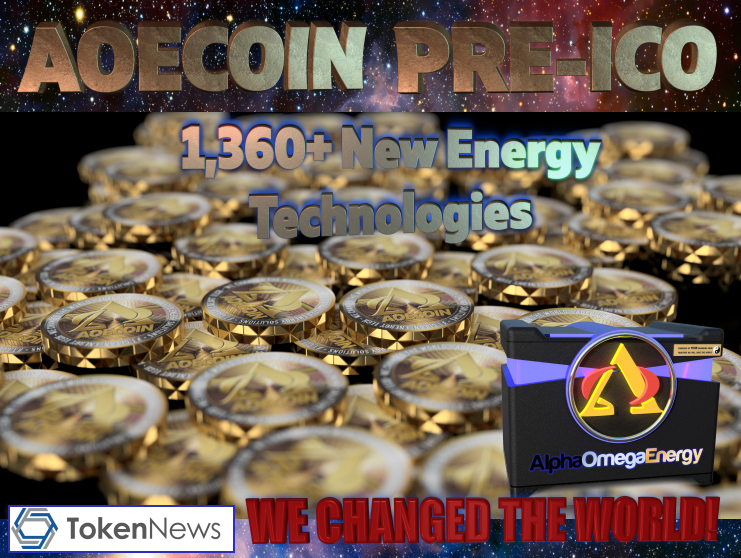 BBC completely out of touch with realty of the Cryptocoin space, calling it a “Tulip Bubble”
That was written by claimed “Tech-Correspondent” Who perhaps should be re-named to “Economically clueless Radical-Tech-Neo-Luddite”

Now, as a Startup we are quite happy about this being that our lead investors invested to us in Bitcoin, and we still have that Bitcoin and it hasn’t been cashed out yet. Since they gave it to us at $3,750, it is up $650 a coin. 17.3% Gain. Now, when the last time you heard of a VC just throwing in another 17.3% just because? Or the value of your money going up by 17.3% in a weekend? It just doesn’t happen. This is an all new world. Now we have more money to be able to build this company that the world needs so so badly. The result of Cryptos rising is now helping hundreds of startups all around the world build companies, jobs, new technologies, innovations, entire industries, and the future of our world.

This correspondent couldn’t be more out of touch with reality. It seems he needs some basic lessons in economics. Many economic experts from Wall Street including:

Goldman and others have given price targets of $5,000 on Bitcoin.

As a mere “tech correspondent” He would seem not at all adequately qualified to shout down Goldman Sachs, the infamous Titan of Market-making in matters of market pricing. Though Goldman has been been wrong before and even so much as lied boldly to the entire public on many an occasion to game them all, they are still to be even more so both feared and respected in skill and understanding of the markets. They invested money into Bitcoin as now have many other Major Banks, Investment Banks, and

53% of Major corporations are headed into the Blockchain.

When 53% of major corporations, as well as many governments all around the world from big to small including G-30 Majors like: Entire Nations like Australia, Cambodia, to Venezuela Heading onto Bitcoin.

With Venezuela being virtually saved by Bitcoin, to Russia coming on in speed, to many others considering it, a call of a tulip-bubble just shows how totally out of touch with reality the writer is. Apparently when everyone who is up on tech in the global economy is all shifting at the same time, this guy can not only not see a trend, but can’t see any economic rush nor benefits at all. One might imagine just even how it is possible that when every single day is peppered with new announcements of huge deals and cooperations and companies going onto the blockchain and taking their massive business financial flows onto it, one would wonder, how on earth could anyone be so out of touch, especially in the seemingly well connected to news tech media?

Obviously this man has never done a pricing model on it. Obviously you can see that he offers no alternate or lower price, but a baseless negative rhetoric without any real price discovery analysis. Opinions matter nothing in the world of finance, only perception matters, and the order book. Opinions matter nothing in the financial world, only financial flows, and the reasons people make those flows occur. Opinions alone don’t matter, only pricing models, economic models, and market demand versus supply.

No one is selling, no one. No one is fearing a big pop, no one. This writer obviously doesn’t understand supply-demand dynamics in price. When demand outpaces supply, there are price increases. Demand is only beginning for Cryptos, but the demand today is Huge and growing. A “tech-writer” isn’t a “market-economist” keep that in mind. What kind of tech? Low tech? Ancient tech? As startup companies make their own coins and make more and more disruptive alternatives in many industries from transport to legal to financial to energy, Bitcoin which is the USD of the Cryptocurrency world, rises in demand just by default, and it will continue until there is a new reserve currency of the Blockchain world, and that isn’t soon. With only 20,000,000 in circulation, that puts incredible pressure on the price.

One can go on and on with the dynamics of why Cryptos are not just not in any kind of bubble, but why it is all rather just before even any kind of beginning in price value discovery well into the upside.

In the stock markets we have famous bears like Marc Faber, nicknamed Dr. Doom. For decades this man wrote about the impending collapse totale of the global markets beginning with the stock market. While entertaining and a good balance to find perspective and value, he was of course always wrong other than 2007, but look at the underlying market…We went from SP 500 to SP 2400 in his time all the while he screamed daily for collapse and bubble.

As much as I like Dr. Doom and his valuable counter-perspective, perhaps we should label these “tulip talkers” as the Dr. Doom voice of the industry. But this huge field of tulips of a market has an entirely different perspective of the world, one where factually the entire world of business, Titan corporations, behemoths like Amazon and Microsoft, and the entire future of business, is

rising the entire world of earth beneath this field to all new un-imagined before heights of economic use, demand cycles, and with a consumption/transaction base built on solid granite ground.

It is on the way out to a much lower form of importance and function. It is slow, tired, costly, pollutive, corrupt, hierarchical, malfeasant, illiquid, and the worst word of all, inefficient. However there is a radical new solution that solves all of these problems, and the whole world is just beginning the adoption of it, faster, energetic, cheap, clean, accountable on a ledger, freedom-giving, harder to corruptly manipulate, liquid, and the most important, much more efficient.

We look forward into the future at a huge tulip field called all of humanity, on a much much higher economic base ground created by the new players in the innovation space.

Bitcoin is the new reserve currency of the technology era. And for the Energy Market,

AOECoin, is the New Money.