marianaemilia (67)in Splinterlands • 2 years ago
Welcome, everyone. As mentioned earlier, the healing ability in the lower leagues is very important, as most cards have very low damage.

This means that the tank with the ability to heal itself, and especially if it has the assistance of another monster with Tank Heal, cannot be killed quickly, and has enough time for it to recover its hit points. Even so, on some occasions, a higher speed may be enough to take the victory.

Speed:
Determines the order in which characters attack. It also makes the character harder to hit with Melee or Ranged attacks.

Watch this battle for example: As you can see my Flesh Golem that has Healing was not able to face the Exploding Dwarf, which has only 1 hit point but in compensation is extremely agile.

The greater the agility, the greater the chance of dodging blows and the more Flesh Golem tried, he was unable to hit the fast Dwarf.

With each extra point of speed, a monster has compared to its opponent, it's chance of not being hit by this opponent increases by 10%.

Some abilities can influence this by increasing or decreasing the speed of monsters:

And in addition to the speed itself, some other abilities can further increase the chance of escaping blows:

Dodge:
Has an increased chance of evading Melee or Ranged attacks. (25%)

Flying:
Has an increased chance of evading Melee or Ranged attacks from Monsters who do not have the Flying ability (25%)

Blind:
All enemy Melee & Ranged attacks have an increased chance of missing their target. (15%)

Now an important note about some rulesets where these dynamic changes:

Reverse Speed:
Monsters with the lowest Speed attack first and have the highest chance of evading attacks.

In this ruleset the situation is reversed, the slower monsters have the initiative and the greater chance of hitting blows, but the abilities like Dodge, Flying, and Blind continue to work, so a fast monster that has some of these abilities will still be able to avoid blows and arrows eventually.

Here we need to be very attentive because in this ruleset all the blows and arrows will always hit and the speed although it still defines which monsters will have the initiative and attack first, will not be able to help in avoidance, as well as the evasion skills will also have not affect.

On many occasions, the Cocatrice is used as a tank, as it is extremely fast, and has 2 abilities (Dodge and Flying) that together increase your chance of no being hurt by 50%.

However, we must remember that in the ruleset Aim True she will almost always not be the best option considering that none of this matters because the tank will always be hit by any blow.

The biggest vulnerability of this type of tank is certainly the magic attacks, when there is no magic, on some occasions he can become practically invulnerable.

In the sequence we will see a battle where Cocatrice faces much stronger opponents and manages to be successful thanks to its speed and skills: 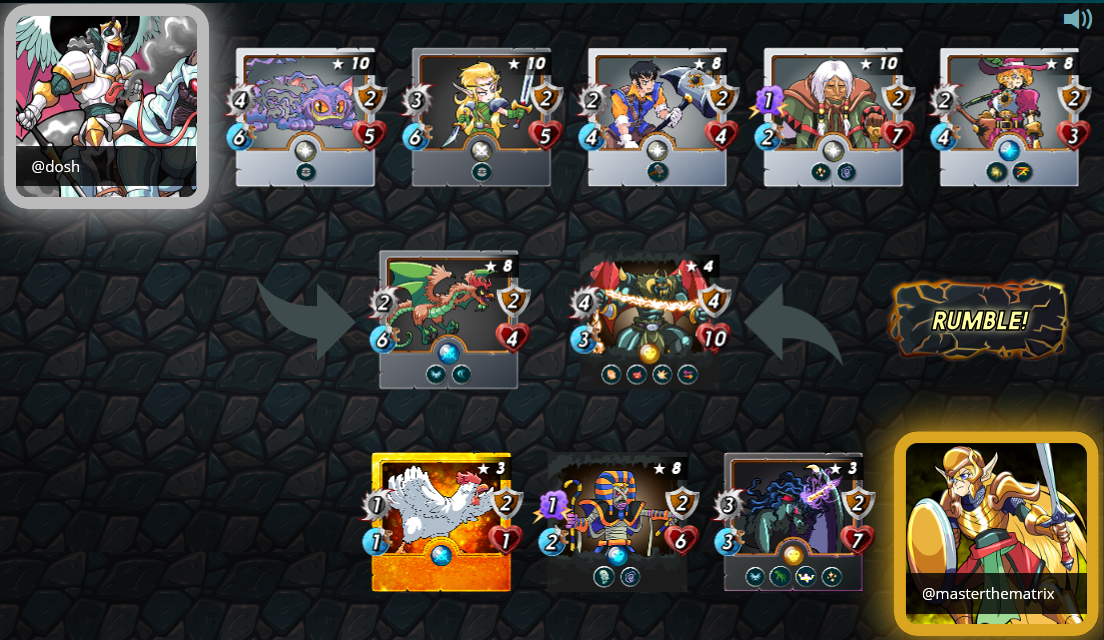 Each type of tank may work best depending on the ruleset of the battle and facing certain types of cards and the opponent's formation.

In future articles, we will go deeper into studying strategic themes taking into account these elements so that understanding is not detached from practice.

If this article was useful, please also read the first two in this series:

Thanks for reading, please leave your comment and see you next time!

I really need guides like this...I'm new to splinterlands. I'd follow you now and I'll appreciate it if you do same :). Thanks

Thanks! I wish you luck in the battles.