Buddha Statues After The Fall Of The Baekje Kingdom

The museum of Gongju-city was displaying several Buddha statue which had been made after the collapse of Baekje kingdom in this area.

The level of the Quality of the works was much lower than before.
I was curious why they had made such a low level Buddha statue, even though they had made so advanced marvelous pieces of work during Baekje Kingdom.

My answer is that the masters of Baekje Kingdom had been forced to move to Gyeongju, the capital of Shilla, after the collapse of Baekje.
It not, how can we understand this phenomenon ?

There were several small pieces of Budda were displayed. Most of them were made after the fall of Baekje dynasty.

Let me show you those works made after the fall of Baekje Kingdom. 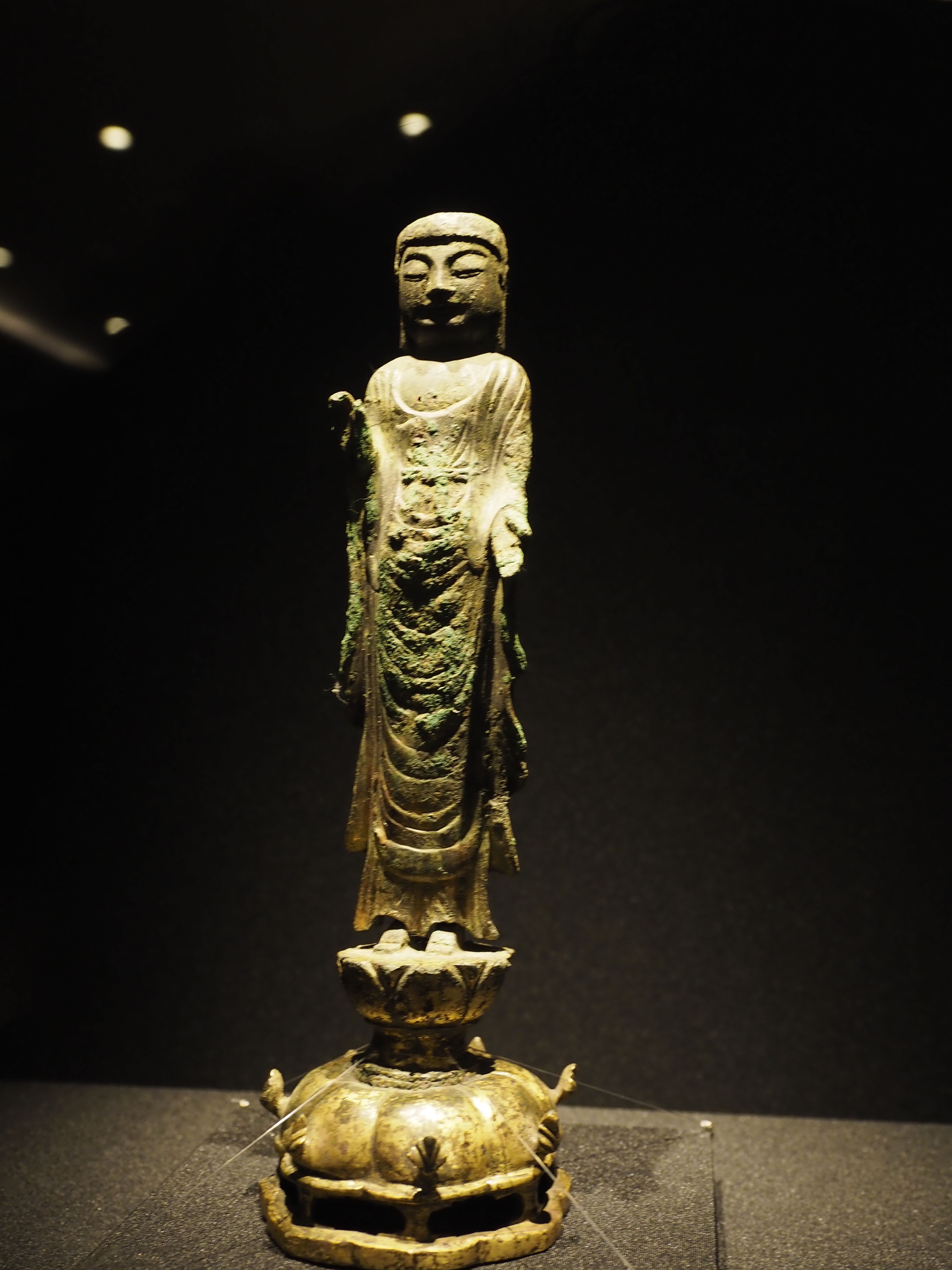 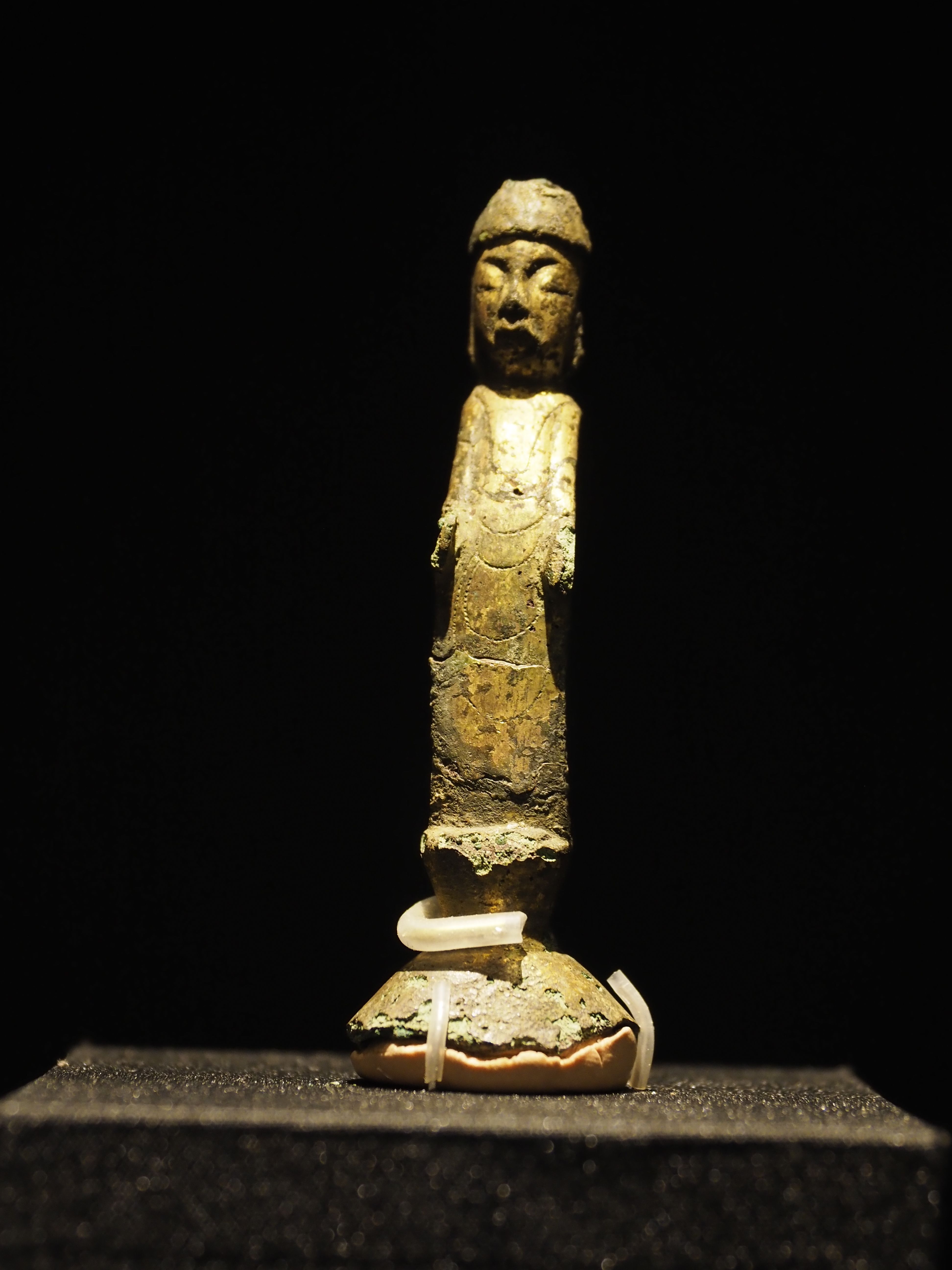 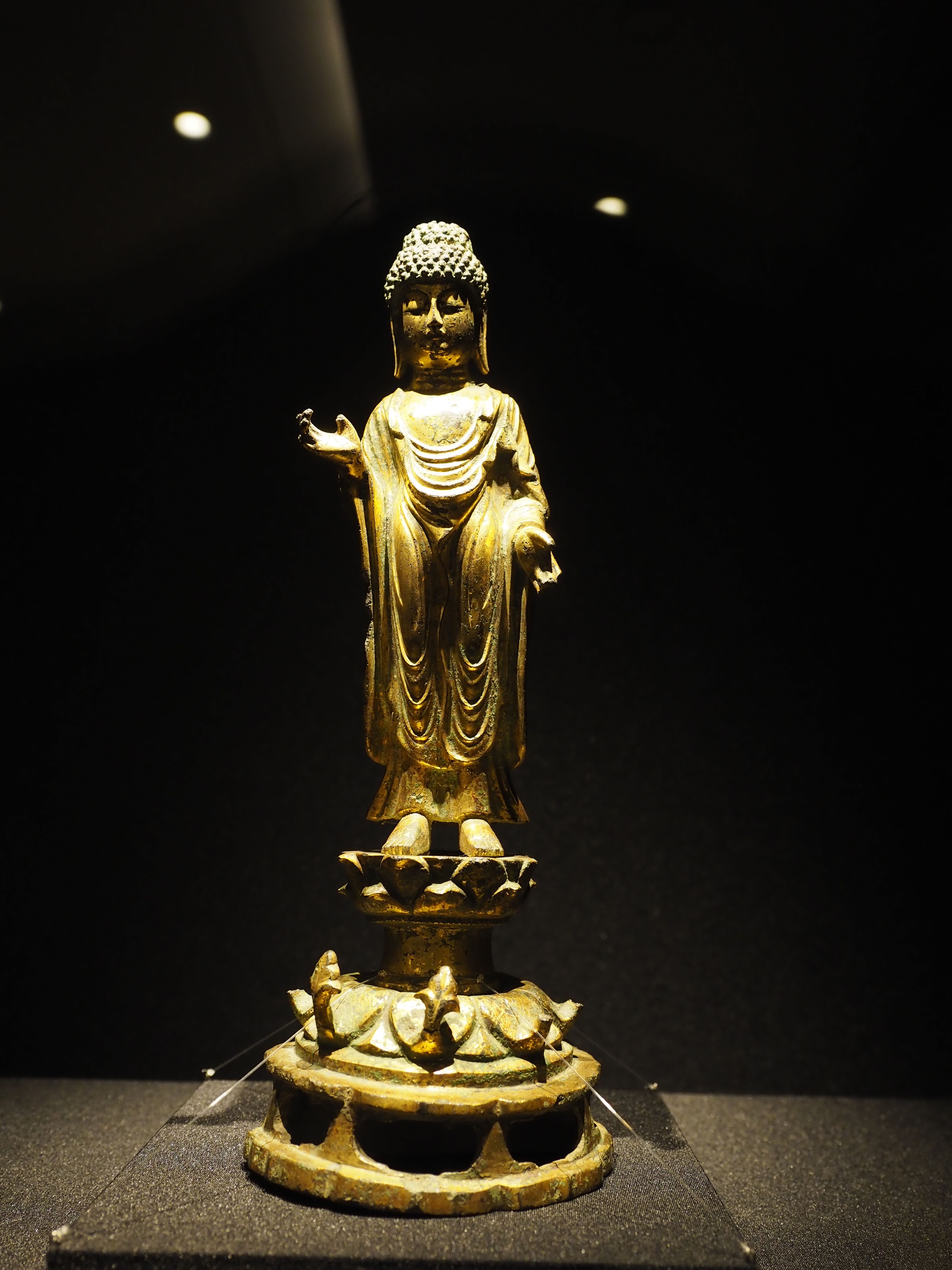 When you compare those statues with the Buddha statue posted in previous posting.

As entering into the exhibition room for Goryeo Kingdom which had been built after the Fall of Shilla Kingdom which conquered Baekje and Goruryeo, and unified Korean peninsular in one country. 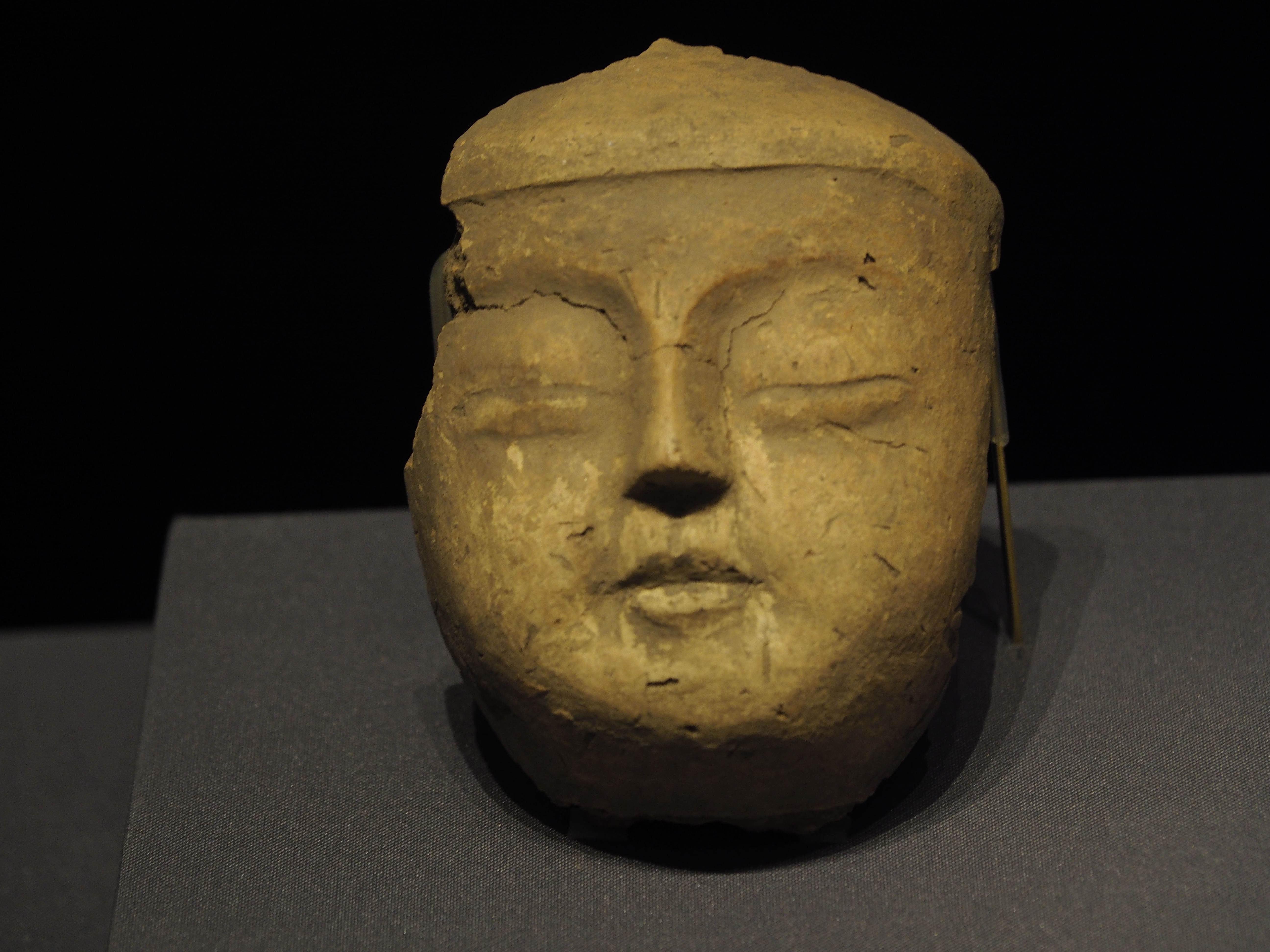 It seemed that the skills of making statues didn’t be transferred to the following Kingdom.
The progress seems not commo.n in history

The Goguryeo Kingdom officially adopted Buddhism in 372 CE, the first of the Three Kingdoms of Korea to do so. The Baekje Kingdom followed suit in 384, and the Silla Kingdom, who had restricted access to China and was thus less susceptible to its influence, embraced the religion in 535.

a very interesting story ,,,, and a very good work, success for @slowwalker

Baekje kingdom art was so perfect. Maybe Shilla invaded Baekje cos of their treasures and take possession of all they got.

It's amazing when descendants have the opportunity to touch, see a part of their history. It is important to preserve this for the next generations. Very manure, when historical relics, roskoks are destroyed by wars, time or indifference.

Sorry I didn't understand quite well the point you're making. I mean the significance of the lower quality statue.

Very interesting sculptures. It would be amazing to see these being made in the past. How unique it each one was and how much effort the artist put into them. Amazing!

Some of them have decayed.

All of them looks very nice and simple. Everyone of them had special thoughts to express.

wuao, what a stunning story to see those beautiful old works of art.

I like these Buddha statues. Sure, they look a little more modest than in your previous story, but they're also valuable and beautiful. And I like this series of pictures from the Museum. The black background is perfect for enhancing the antiquity and the greatness of these sculptures. Although you do not consider yourself a professional in photography, but in fact your pictures are very good. Thank you for taking the Museum. I virtually travel to Korea with a wonderful guide in your face. That's great!

Hi @slowwalker, Sorry I don't know clearly about the statue or the history of the kingdom that you have posted, but I read it carefully for my additional information. I really wanna be to be like you who do travelling and share it. For those reason , I always remember your words that you have said to me last month, "it we want something we should do hard to get it". To night I came with new reputation and it because of your words. Thanks so much.

The Baekje Kingdom is amazing.excellent capture.really great work keep it up and thanks for sharing your post with us

Look a little more decent than your previous story, but they are more valuable and beautiful. I like the pictures from this museum. The black background is perfect for the ancient and the magnificence of these sculptures. Thank you for taking the museum.

These lines are great rare antiques I have some information Ed he discussed UNESCO experts in cultural projects What to do about the two statues on March 3, 2011 in Paris. Researcher Erwin Emerling of the Technical University of Munich announced that it is possible to restore the small statue using the organic compound silicone.

Thank you for useful knoweldge @slowwalker . History is magistra vitae. Historical knowledge is powerful for our future. We learn about Budha and phihology of one nations like Korea in your post. I heard about this two dinasty first time and I am glad to learn more about statue and spirituality. Thank you for your awesome post.

Wow, what an incredible post. Now I have motivation to finish reading the Dhammapada! Thank you for upvoting my VICE/YouTube Ban post btw:) Thank you @slowwalker. Very interesting to see these magnificent statues

Hmmm... Two of them look a bit like an ivory sculpture of Kuan Yin that I saw at an auction 2 yrs ago... What materials are those made of?

Zhou's book describes that Baekje owned many temples and pagodas. Buddhism came in 384 (in the days of King Chimnyu) led by a monk named Marananta de Xiyu who remained in the court and built a temple where approximately ten monks lived, then Baekje Buddhism grew under national support and this allowed build temples like the one in Wangheungsa located in Buyeo. However Samguk Sagi says that the temple was built in the spring of the year 600,3 a certain reperto of such a temple was found during an excavation carried out in 2007, it is a reliquary. saying '丁酉 年 二月 十五 日 百 濟 王昌 爲 亡 王 子 爲 刹 本 舍 利 二枚 葬 時 神化 神化 神化 三 En' On February 15 of the year Jeongyu, King Wideok of Baekje built the temple to remember his son with the relics of two Buddha bones that became three under the god's help
Many people prefer to refer to Buddhism more as a philosophy of life than as a religion. The reason why Buddhism is very great is the simplicity in how messages are transmitted full of wisdom.

Beautiful looking this archeology photography,
I appreciate this history.

slowwalker
I agree with you. The Buddha statue can easily be seen as being very different from the earlier ones.
It is an odd thing. I would think that each group and generation of peoples would have similar talent to cutting and carving the statues.
But, maybe I would be wrong.
Very interesting for sure.
Thank you

Very interesting facts behind the art. Would have never been able to tell the difference between the quality to be honest. @slowwalker

Your article looking amazing. By this post we can know or increase our basic knowledge about Buddha status.

Interesting, thank you for sharing.

The history of Buddha statues ...

That sculpture are amazing and so detailed, great pics!

the statue is very beautiful,I see a lot of historic items that you post,Thank you for showing us antiques history

Buddha is the incarnation of God on one hand on other hand Goryeo Kingdom unified Korean Peninsula, on third side the last kingdom didn't do so good statues as previous ones...
Many points in this historical text...

My upvote will contribute to climbing to the $500 mark!

Good piece. I have seen in many different fields that quality of craftsmanship has diminished and is surely not of the same standards as the older masters who had a strong sense of passion for their craft.

Amazing culture thank you so much for this interessing post

Thank you for sharing about history, very useful. Indeed the statue on the baekje dinasty is very good. I like the picture of the fifth Buddha statue, very good.

Great history
I like it this photography
I appreciate your valuable Post.... best of luck my friend @ slowwalker

There was light is Buddha

The pictures are soothing me to the core .
I wish you made vlogs ,☺