America Has Debt 57 thousand Tons of Gold To Indonesia 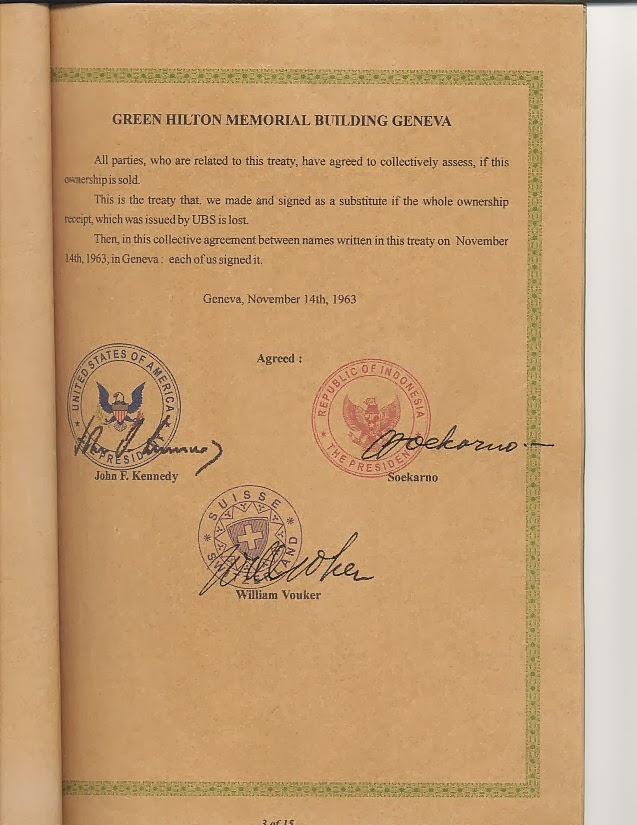 "The Green Hilton Memorial Agreement" in Geneva on November 14, 1963

This is an agreement that often makes everybody busy who becomes President of Indonesia. And this is the covenant that makes some people crazy about spreading money to get a piece of this treasure that became known as one of the Mandate of the people. This is the covenant that the world community as the Eternal Treasure of the Mankind. This is then the target of Soeharto's secret team work torturing Soebandrio et al to open his mouth. This is the agreement that made Megawati when the President of RI to collect appointments to Switzerland but could not. Whereas Megawati has said that she is the President of RI and she is Princess Bung Karno. But still can not. This then makes SBY then form a secret team to track this treasure which then also remains barren. All bothered parties are made by this study. The agreement was named "Green Hilton Memorial Agreement of Geneva". The most expensive deed in the world is signed by John F. Kennedy as US President, Ir Soekarno as President of RI and William Vouker representing Switzerland. This triangle agreement was made at the Hilton Hilton Hotel on November 14, 1963 as a continuation of the MOU conducted in 1961. The point is, the US Government recognizes the existence of gold bars worth more than 57 thousand tons of pure gold consisting of 17 packages of gold and the Indonesian side received gold bars It becomes a collateral for the US financial world whose operations are carried out by the Swiss Government through United Bank of Switzerland (UBS).

In other unpublished documents mentioned, for the use of such collateral the US must pay a fee of 2.5% a year to Indonesia. However, fear of emerging corrupt leaders in Indonesia, then the fee payment is not open. This means that the right of disbursement of fee fee is not on the President of RI anyone, but there is on the bank system that has been made in such a way, so that the disbursement is not easy, including for the President of the US itself. 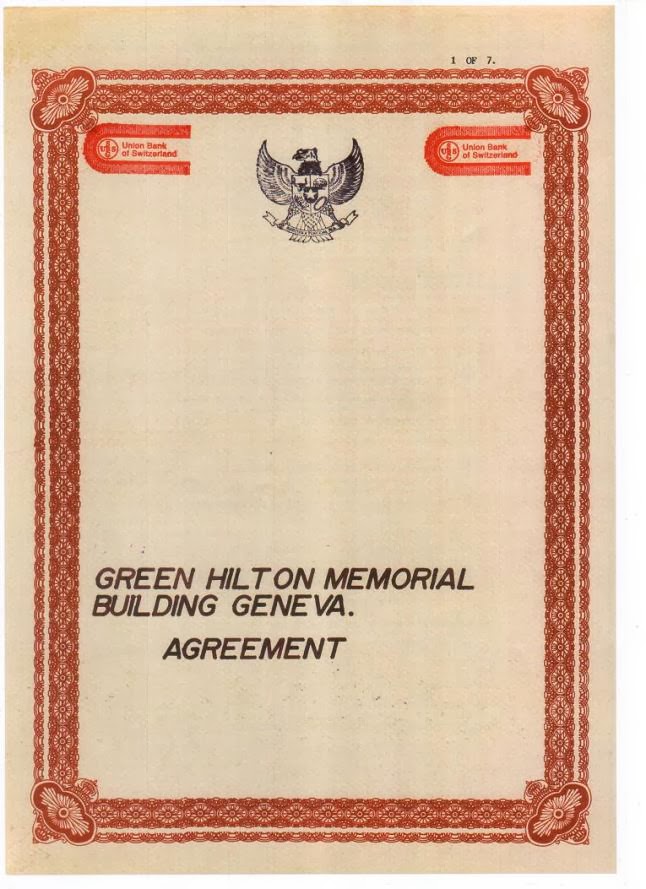 This special account was created to accommodate the asset that until now no one knows of its existence except John F Kennedy and Sukarno himself. Unfortunately before Sukarno passed away, he has not had time to give mandatory disbursement to anyone in the country. In fact, if anyone confesses that he is the one whom Bung Karno trusts to disburse property, then the person is guaranteed to lie, unless there are special signs of important documents that do not know who is holding up to now.

According to a source in the Vatican, when the President of the United States conveyed his intentions to the Vatican, the Pope could ask whether Indonesia had approved it. Reportedly, the US only uses the facts of MOU between G-20 countries in the UK where Indonesian President Susilo Bambang Yudhoyono (SBY) is signing an agreement to give authority to the world's finance of IMF and World Bank to seek alternative funding sources. It is said that the Vatican advised that Indonesia be given assistance. Perhaps IMF assistance of USD 2.7 billion in the Special Drawing Rights facility (SDR) to Indonesia in the middle of last year is the realization of this agreement, so there is a growing issue that the aid does not need to be returned.
By Bank Indonesia, the IMF's amount of aid is used to strengthen the country's foreign exchange reserves. If so, then how much the people of Indonesia. If so, how stupid is our Government in this matter? If this is true how impotent this nation, only gets $ 2.7 billion. Though the property is worth thousands of trillions of American dollars. The asset is not a free asset of historical relics, the asset is the result of the hard work of our ancestors in the era of the golden age of the kingdom in Indonesia.

The Origin of the "Green Hilton Memorial Agreement" Agreement

After the end of world war, the war-ravaged eastern and western countries began to rebuild their infrastructure. However, the impact the war has given is not materially but also psychologically enormous. Social and religious unrest is everywhere. People fear this war will happen again. The governments of the western countries that are heavily involved in world wars try to calm their people, saying that people will soon enter a better industrial and technological era. Jewish bankers know that the eastern countries of Asia still have plenty of gold reserves. Gold will be made as collateral to print more money that will be used to develop the industry and master the technology. Because Information technology is waiting in the days to come.
Elder Mason who worked at the Federal Reserve with Bankers of the Bank of International Settlements / BIS (Central Bank of the World Bank) visited Indonesia. Through a meeting with President Soekarno, they said that in the name of humanity and the prevention of the re-occurrence of a recent world war and the destruction of all the countries involved, each country must reach an agreement to utilize the Gold collateral owned by each country for humanitarian programs. And all countries agree on it, including Indonesia. Finally there was an agreement that the gold-gold property of eastern countries (Asia) will be submitted to the Federal Reserve to be managed in humanitarian programs. In exchange, the Asian countries receive Bonds and Gold Certificates as a mark of ownership. Some of the countries involved are Indonesia, China and the Philippines. At that time, Sukarno's influence as a leader of the eastern world was so great that America was worried when Soekarno was so close to Moscow and Beijing that he was an enemy of America. 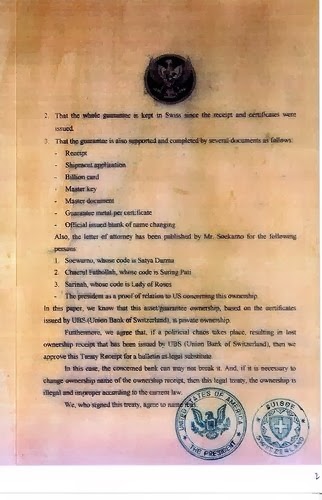 But a few years later, Sukarno began to realize that the agreement between the eastern and western countries (Jewish Bankers and world financial institutions) was not run as it should. Soekarno kissed the rotten conspiracy of the Jewish Bankers who were part of Freemasonry.

No humanitarian programs are run using the collateral. Soekarno protested violently and soon realized that the eastern countries had been deceived by the International Bankers. Finally In 1963, Soekarno canceled the agreement with the Jewish Bankers and transferred the gold-gold rights to the President of the United States John F. Kennedy (JFK). At that time the United States was trapped in massive debt after being involved in world war. President JFK wants the country to print money without debt. Because the power and responsibility of the Federal Reserve is not on the American government but is controlled by a private that in fact is a Jewish banker. So if the American government wants to print money, then the government should borrow to the Jewish bankers with high interest as collateral. The American government then lobbied President Soekarno for gold-gold that had been used as collateral by Jewish bankers in the transfer to America. President Kennedy was willing to convince Sukarno to pay 2.5% interest per annum from the value of gold used and come into force 2 years after the agreement was signed. After the MOU was signed as a sign of approval, the Green Hilton Memorial Agreement was established in Geneva (Switzerland) signed by Soekarno and John F.Kennedy. Through the agreement the US government recognizes Indonesia's gold bar of more than 57,000 tonnes in 17 packs of gold packaging. 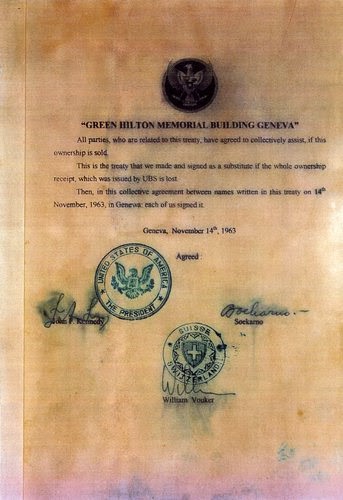 Through this agreement Soekarno as the trustworthy mandate holder will reposition the gold collateral, then used into the banking system to create Fractional Reserve Banking against the US dollar. This agreement is facilitated by the Threepartheid Gold Commission and through this agreement also the power of gold is changing hands to the American government. From the agreement, the Executive Order number 11110 was issued, signed by President JFK authorizing the Treasury to take over the right to issue currency from the Federal Reserve. What ever Franklin, Lincoln, and some other presidents did, in order to get America out of the shackles of the Jewish bankers' credit system was also applied by the president of JFK. One of the powers granted to the Treasury is issuing silver certificates of silver coins so that the government can issue dollars without debt to the Federal Reserve. Not long after the signing of the Green Hilton Memorial Agreement, President Kennedy was shot dead by Lee Harvey Oswald. After Kennedy's death, the dark hands of the Jewish bankers transferred the gold collateral to the International Collateral Combined Accounts for the Global Debt Facility under the supervision of OITC (The Office of International Treasury Control), all controlled by Jewish bankers. The agreement was also ineffective, until Sukarno was overthrown by the New Order movement which was orchestrated by the CIA who later appointed Soeharto as President of the Republic of Indonesia. Until when Sukarno fell ill and no longer take care of these assets until death. The only legacy left behind, related to the Green Hilton Memorial Agreement, is a coded book that hides hundreds of accounts and sub-accounts used to store gold, protected by a secret system in the Federal Reserve called The Black screen. The book is called the Book of Notices or The Book of codes. The book is much in the hurry by the World Financial Institutions, the elders of Mason, the American political leaders and Intelligence and others. The existence of the book threatens the existence of Western financial institutions that have succeeded so far.

To date, not a single cent of the interest and principal amount of the asset is paid to the Indonesian people through the government, in accordance with an agreement agreed between JFK and President Soekarno through the Green Hilton Agreement. 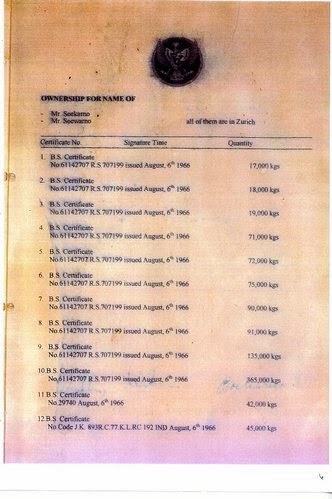 Though they have used Indonesia's gold as a collateral in printing every dollar.

The same thing happened to the Chinese and Filipinos. That's why in the early 2000s China began suing in New York District court. The trillions of trillions of United States dollar have shaken financial institutions in America and Europe. But the lawsuit has been more than a decade and has not shown results. Indeed the lawsuit is not easy, it takes a lot of patience, because it is not only dealing with a big country like America, but also dealing with Jewish interests even reportedly there is interest with the Vatican. Will the Government of Indonesia follow the steps of the Chinese government suing the golden rights of the people of Indonesia worth Thousand Trillion Dollar...

can to pay the debt of Indonesia and make this country prosperous? This post has received a 25.00 % upvote from @nettybot thanks to: @riandi.