The 1883 Krakatoa eruption (for dummies)

elfranz (57)in #history • 4 years ago (edited)
I'm sure we all know this guy named Chad, he's a loud person, talks like he's yelling and always is boasting about how much does he vapes; "I'M THE BEST BRO, LOOK AT ME VAPING EVERYWHERE CUZ IT'S FUN". Well, Chad, you know what else was really loud and made a lot of smoke?

THE VOLCANIC ISLANDS OF KRAKATOA A little bit of context on this fiery mountain

The volcanic islands of Krakatoa was (Yes, "was" SPOILERS AHEAD, It exploded) a nice mixture of archipielago, mountain and active volcanic hellscape, the perfect place to set your own evil lair if lava pits and hellish streams of fire are your thing, this doomsday paradise was located in the Sunda Strait between the islands of Java and Sumatra and had three volcanic cones rising to the sky.

Krakatoa had a really bad history of spiting fire and lava to its neighbors, it doesn't help that its neighbors are equaly rude beacause Indonesia has over 130 active volcanoes but that's family. Since its birth violence and fire where its friends, studies of the place found that in pre-history times a series of caldera-forming eruptions occurred spawning lava and magma finally forming the mainland of Krakatoa y its distintive cones, they grew and grew over time reaching over 800m on one of its tallest cones.

Our reporters at the scene reported that they weren't in the scene, but thankfully we have the Javanese Book of Kings and they recorded the events of what happened during the event, the book tell us of that

A thundering sound was heard from the mountain Batuwara which was answered by a similar noise from Kapi.

Both Butawara and Kapi were mountain found in the Sundra Strait, this tells us that those moutains had a job as part-time volcanoes, lets continue with the book

A great glowing fire, which reached the sky, came out of the last-named mountain; the whole world was greatly shaken and violent thundering, accompanied by heavy rain and storms took place, but not only did not this heavy rain extinguish the eruption of the fire of the mountain Kapi, but augmented the fire; the noise was fearful, at last the mountain Kapi with a tremendous roar burst into pieces and sank into the deepest of the earth Not only this is the most amazing metal band concert opening show, this is a completly terrifying scenario, just try to imagine yourself in your hut in a tropical island when out of the blue you get earthquakes, blasts of fire, a storm, rain and a mountain blowing up then sinking into the sea.
But wait...

First of all Rajabasa was another volcano located in th southern part of the island of Sumatra. Second, if you didn't have enough with the previous scenario, you can add a tsunami that devastated the south of Sumatra and the North of Java.

And third, unfortunaly most scientist agree that there's no geological evidence for an eruption of that magnitude around that time and I think the text are exaggerating a bit, a explotion capable of separating the islands of Java and sumatra whould've made the world to got dark and cold caused by the volcanic ashes alone.

And for the main event Lets say the year of 1883 was a great year for the Krakatoa Island with a shcedule full with tremors and earthquakes all around the area, the northernmost cone Perboewatan was regularly and eruptions could be heared from Jakarta, is important to say that ash eruptions reached altitudes of 6 km, so yeah, pretty much like a 90' businessman in New York.

Around the month of June earthquakes created unusual high tides and made the water surrounding the island pretty hard to navigate, and a big black cloud was reported to be permanently on top of the volcanic island.

The 25th of August things got much worse, the eruption was constant at this point with explotions every 10 minutes, just like a really dangerous lava clock, the black cloud reached 27 km high and 20km around the island sailors reported heavy rain of ashes, mix that with a little tsunami here and there and you got what you need. The 27th of August shit hit the fan when 4 great explotion took place, the first one around 5:30 am, yep good morning guys, launched a huge tsunami headed to the north of the island. The second explotion was at 6:44 am, launched another tsunami this time eastward and westward, the third was so violent and loud that was heard in the lands down under in Perth, yes like Perth, Australia that's more than 3000 km away from Krakatoa, at the other side of the ocean the same explotion was heard in Mauritius, a few 4800 km away, where they thought they were under attack by cannon fire. The third one is said to be the loudest on measured to be at 180 dB at 160km, imagine how loud was that explotion that it sounded like a concert of commercial airplanes from one major city to another.

The forth and final explotion occurred when a landslide tore off half of the main volcano at 10:41 am and this one was intense, the pressure wave generated by it travelled at 1086 km/hand went around the globe three and a half times, the sound reached the 310dB and could be heared mora than 5000 km away, sailors at mo that 60 km away reported to have their eardrumf ruptured by the sound and the pretty cloud of smoke and ash got to the 80 km in altitude, the explotion was so immense that is calculated to be about the same as 200 megatones of TNT, that's more or less 4 Tsar Bombas the mos powerful thermonuclear weapon ever created, this huge blast blew up 2/3 of the Krakatoa Island. Let this sink in

The impact of this volcanic explotion was felt around the globe, and that is no said in a figurative sense, the scale is huge, in the vicinity of the former Krakatoa Island people found coral rocks as far as the coasts of Java, the pyroclastic reached the coasts of Sumatra combined with acid rain, by the way a pyroclastic flow is a sick mixture of an avalanch with searing ash, steam, rock and hot air traveling at 700 km/h and reaching teperatures above the 900°C.

There were so much ash a debris near the site another temporary island were formed by them, tsunamis were a huge factor on this catastrophe, reaching above 30 meters they hit the surrounding islands destroying everything in their path as tsunamis tend to do.

The global temperature wasn't safe of the volcano's wrath, the average global temperature droped by 1.2°C and the weather patterns were chaotic until th year 1888, becasue the eruption poured so much sulfur dioxide (SO2) into the atmosphere that the levels of sulfuric acid (H2SO4) increased at levels that made the high clouds reflect more sunligth and cooled the entire planet.

Even the art was affected by Krakatoa, in 2004 an astronomer proposed that the way the sky looks in the painting The Scream by Edvard Munch in 1893 was pretty much the same red Norway's sky would be at the time Krakatoa erupted, the event darkened the skyis worldwide, making the sunets redder and twilights purple. ... Chad, you think you're so cool, and loud and vape so much, but you're nothing next to the mighty, explosive, destructive, power the KRAKATOA VOLCANIC ISLAND

Even this guy is better than you! Krakatoa has a son its name is Anak Krakatoa, OMG LOOK HOW CUTE IT IS!!! 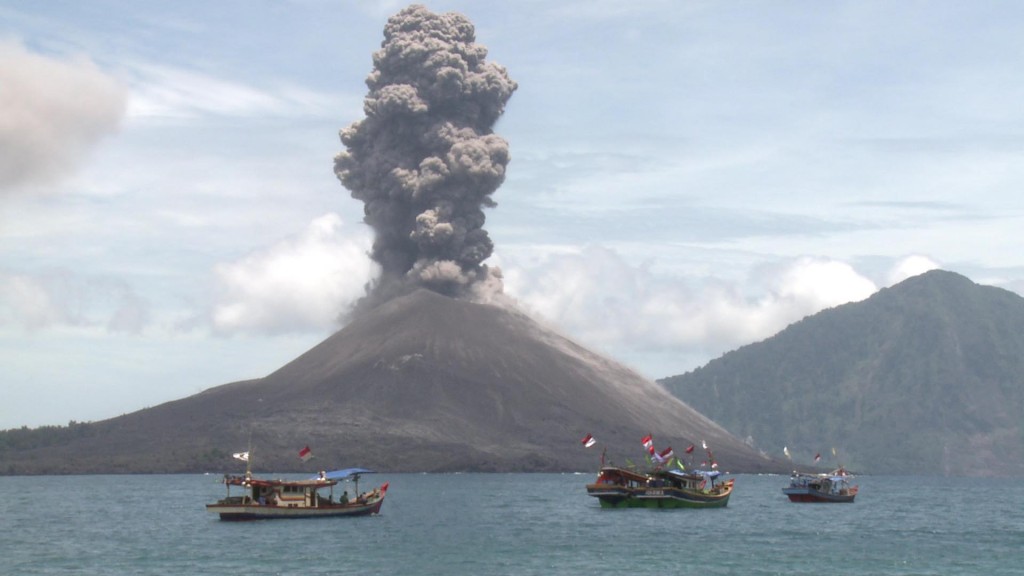 Is Chad giving you a hard time? Are you curious about something? Would you like me to explain it to you? Would you like a post about it?
Leave me a comment below and I'll give my best shot!

Bibliographique Source (Yes, only one source, I'm a Historian)

It's super interesting how through memes you recreated the history of the eruption of the volcano!

That was an awesome post mate. I never really didn't liked history but the way you told, it I was not bored for bit.
I really Enjoyed it looking forward to more good work from you.

Thanks you, I'm working on future posts so stay tunned and don't forget if you are curious about somethin in special and would like a post about it just put it in the comments =)

Congratulations @elfranz, this post is the second most rewarded post (based on pending payouts) in the last 12 hours written by a Dust account holder (accounts that hold between 0 and 0.01 Mega Vests). The total number of posts by Dust account holders during this period was 10750 and the total pending payments to posts in this category was $2393.61. To see the full list of highest paid posts across all accounts categories, click here.

Omg, this post is amazing, I love how you tell the story. Congratulations! I'll wait for more posts like this!