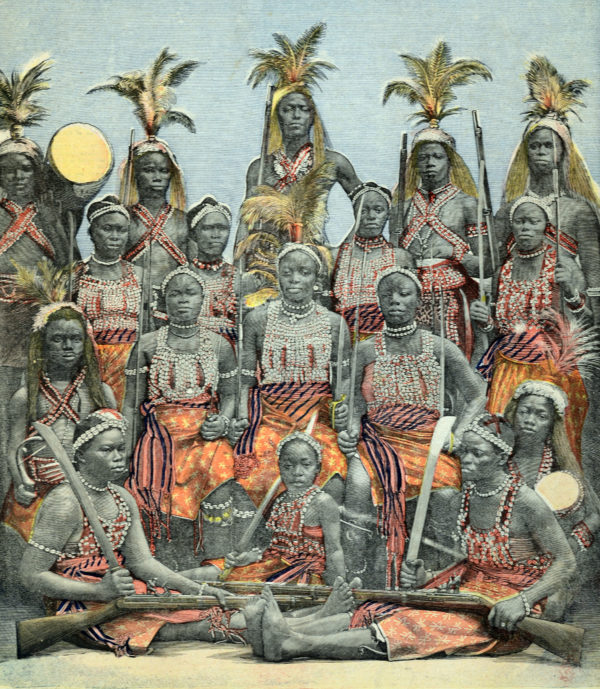 The Dahomey Amazons, or Mino, were an all-female regime of the Fon people of the Kingdom of Dahomey in what is the present-day Republic of Benin.
The expertly trained female fighters were notorious for decapitating their opponents in battle. Those unfortunate enough to have been taken captive often suffered the same fate.
The women fought side-by-side with male soldiers to defeat the French in 1890 during the First Franco-Dahomean War.
The French army lost several battles against the Fon, thanks to the strength and skill of the female warriors.
They referred to themselves as Ahosi, meaning “king’s wives,” or Mino, meaning “our mothers” in the Fon language, but were dubbed “Dohomey Amazons” for their similarity to the semi-mythical Amazons of the Anatolia.
Once becoming Amazon warriors, the women weren’t allowed to marry or have children.
The Fon’s female army was comprised of several subgroups, including the artillery women, the elephant huntresses, the musket-bearing frontline group, the razor women and the archers.
The women had extensive training and carried muskets, cannon and even modern artillery in their later days.
In addition to serving in the military, the female warriors had daily chores in the royal household, such as indigo dyeing, weaving and embroidering.
The Dahomey Kingdom was ultimately conquered by the French 1892, leading to the disbanding of the Dahomey Amazon army.

so glad i found your steem! followed💞