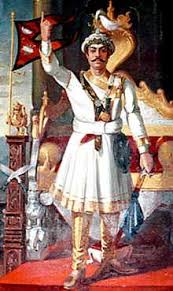 Who is king Prithivi Narayan shah?
He was the first king of United Nepal and Gorkha kingdom.

He was born on 11jan 1723 and died on 11jan 1775 .
What he does for Nation Nepal?
He is the one who Re-unified whole nàtion and become single king .
He does so because he had an early dream of conquering Nuwakot (kathmandu) partially as his father had lost it the mallas of kathmandu.