CLINOMANIA: A Medical and Psychological Disorder 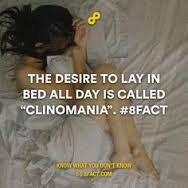 For sure, nobody likes waking up early in the morning. Most people try their best to squeeze out an extra hour of sleep. That’s okay, and that’s even normal, as long as you don’t end up being late for work or school. And there’s always coffee to wake you up and get rid of the drowsiness for the rest of the day.

But there are some people who find it next to impossible to get out of the bed. It’s a serious condition where no amount of sleep is good enough. This hinders their ability to lead a normal and healthy life because all that they think of, is getting another hour of sleep, even though they have slept for 12 or 13 hours already (a healthy adult requires just 7 to 8 hours of sleep). This condition is known as CLINOMANIA or DYSANIA.
Clinomania or Dysania is an anxiety disorder where a person likes to stay in bed for as long as possible and has no intention of waking up. Clinomania is associated with other anxiety disorders such as depression and Chronic Fatigue Syndrome, but it is different in a lot of ways.
It could be a Medical Condition wherein the Clinomaniac suffers as a result of a neurological disorder known as neurasthenia as diagnosed by Dr. Beard George in the 1960's.Or a Psychological Condition gotten from anxiety disorder such as depression and it is linked to Chronic Fatigue Syndrome.
Clinomania is derived from the Greek words “clino”, which means bed and “mania”, which means addiction. Literally speaking, clinomania means “addiction to bed”. Clinomaniacs are people who suffer from this condition and they feel a strong need to be in bed, without any concern whatsoever to their responsibilities in the outside world.
Clinomania is called a “mania” because it denotes an obsession with the bed – clinomaniacs have an obsessive relationship with their bed and hate to be parted from it, even at the cost of not carrying out serious personal or professional obligations that can affect the quality of their life. A clinomaniac’s acute craving for sleep is very much a mental disorder or a psychological problem. While it is often mistaken for chronic fatigue syndrome, that is not really the case because clinomania has nothing to do with fatigue or exhaustion. It is purely an anxiety disorder. Clinomania is, however closely linked to depression. Not all clinomaniacs are affected by depression, but most people who have depression exhibit clinomania symptoms.
It is quite difficult to diagnose Clinomania because different individuals show different symptoms. Some of the symptoms are also similar to other anxiety disorders such as sclerosis and systemic lupus erythematosus.

Clinomania cure involves psychological counseling by a trained psychologist or psychiatrist. Clinomania medications such as serotonin supplements are very effective. Apart from the medical treatment itself, clinomaniacs should work hard to shake off the condition by exercising regularly, having a wholesome breakfast, having lots of water, coffee and following regular habits. There are also a wide variety of other medical treatments recommended for clinomania, which range from natural methods such as exercise and diet, to injection of chemicals such as serotonin. Anyone with clinomania symptoms should get themselves evaluated by an experienced psychologist.