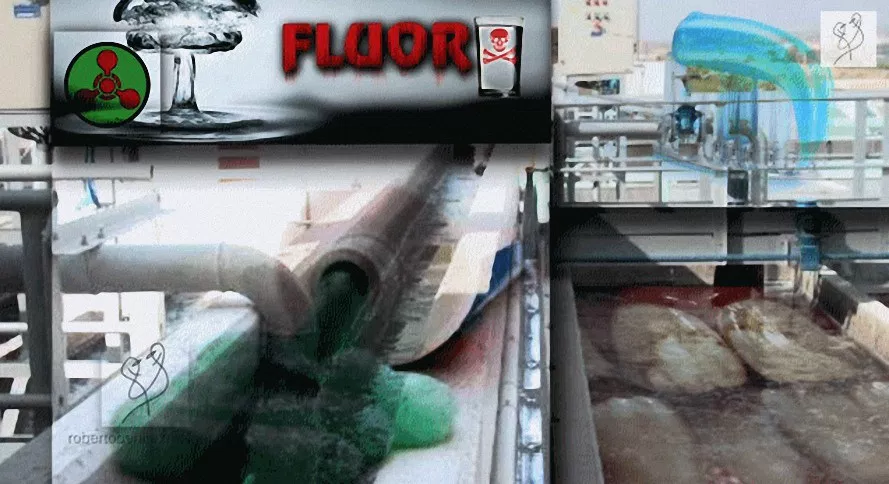 We are being poisoned. This mass public intoxication has been going on for more than a century, and has been gradually increasing.

You and your loved ones are being harmed almost continuously. We are being abused with several poisons in small doses on purpose.

This highly toxic chemical warfare agent has been added to the public water supply since around 1910 as a disinfectant. The present common health problems of circulatory diseases and cancer spread only after the masses began to be treated with chlorine regularly. Drinking it, bathing in it, breathing and submerging it in the showers, and consumption in most of the city's water-based food and beverage products makes chlorine one of the most common public poisons.

Fluoride added to municipal water and dental hygiene is not very good for teeth. It is one of the causes of cancer, which induces apathy, the chemical reduction of intelligence, a waste product of aluminum and the manufacture of phosphates. It had accumulated in the production plants since 1940 and was ruining the local groundwater.

The industry first tried to get rid of excess fluoride by marketing it as rat poison, but it was not sold enough. Then, in the 1950s they invented the scheme to convince the American Dental Association to recommend adding to public water supplies and oral hygiene products to harden teeth. In the long term, what really makes the teeth become brittle and mottled, while decreasing people's IQ, minimizing active interests and shortening lives.

Aluminum has been used in kitchen utensils and food service material. When people learned of its toxicity, they began to abandon the aluminum pans and avoided food wrapped in aluminum foil.

Extremely fine particles of it are the main component of the "chemical trails" (chemtrails) spread over practically all areas of America, Europe and almost the entire world, under the logic of "geoengineering" to counteract "global warming". Since concern about global warming and carbon emissions due to human activity is fraudulently promoted to expand population control, this broad chemical fumigation is actually being done for other reasons: climate manipulation and poisoning public. Strange stelae, often sprinkled in the sky, by airplanes, are not steles of normal planes.

Aluminum is another neurotoxin that reduces intelligence and memory. It is considered an important contributor to early senility and dementia.

For the millions of us who receive "silver" dental fillings, long-term mercury contamination is safe. That highly toxic heavy metal was an ingredient of amalgam. In addition, mercury is used in the preservative thimerosal in most vaccines, including those given to children, even babies.

Mercury is another neurotoxin and is blamed for the incredible increase in the number of autistic children, many of whom radically change within a few days of vaccination.

Vaccines and flu shots do not really protect us from infections. Rather they are seriously harmful, especially for infants who receive an overwhelming mixed vaccination cocktail. In addition, vaccines are sometimes contaminated with carcinogenic viruses and are a debilitating stress for the human immune system.

The approval of pharmaceutical drugs by a government agency does not mean they are safe to take. Many of them have terrible side effects, often blocking biological systems and promoting long-term disease. Then, additional medications are prescribed. Many of the routine medications today are psychotropic, further reducing intelligence and enthusiasm.

The radioactivity emanating from Fukushima is the greatest nuclear disaster in human history, as well as leaks in other nuclear weapons facilities, depleted uranium munitions used by the military, radioactive metals such as barium and thorium in chemtrails , aerosols and the persistent particles of the nuclear tests of the 1950s and 1960s, is another important contributor to the cancer epidemic.

The artificial sweetener aspartame is promoted as an ingredient in diet products for weight loss and diabetes. In addition to worsening each of these conditions, it is a tremendous neurotoxin. It is transformed into methanol (toxic wood alcohol) and formaldehyde in the body, damaging the brain, which weakens eyesight, damages the pancreas and liver, and makes some people go crazy. Why was this poison approved for consumption?

Aspartame is now added regularly to chewing gum, as well as to flavored water. Read the ingredients labels to avoid this poison.

Monosodium glutamate is used as a flavor enhancer. It is both an "excitotoxin" that stresses the cells, and an annoying neurotoxin for the brain and nerves. Diminishes intelligence, can cause bloating and digestive discomfort and can cause damage to the heart.

Bisphenol Acetate is an estrogen imitator that is allowed to be in food and plastic for the home, including plastic water bottles. This plasticizers and the like, such as bisphenol sulfone (BPS) are causing imbalances and sexual alterations and cancers of the breast and of the sexual organs.

This toxic herbicide and other hazardous chemicals are used in agriculture and not just to wash the product.

Glyphosate was documented to be a factor for infertility and cancer. Most other agrochemicals are also debilitating. Glyphosate and other runoff chemicals (one of the main causes of global erosion of the sulo) are commonly found in drinking water as well.

Genetically Modified Organisms, are usually used in conjunction with agricultural chemicals, including common food in corn, soybean, canola oil and sugar beet crops. In the United States, almost all of these widely consumed foods are genetically modified. Most milks and dairy products contain the growth hormone BGH, and most animals are fed meat containing GMO, without labeling.

Genetically modified foods are hard on the digestive system, and usually very harmful to cells and organs.

The electromagnetic fields of cell phones, computers, televisions, "smart meters", cables and transmission towers, etc., are seriously weakening and damaging the health of people, animals and plants. The one that has more frequencies of electromagnetic fields in the vicinity, the greater the damage. Use your cell phone sparingly and change your ears often or better use the speaker (hands-free)

Why are they poisoning us?

We are being poisoned systematically and on purpose, we need to make it known enough to get it to stop.

Why are we being massively exposed to a series of serious poisons and falsely said they are not harmful or even good for us?

The powerful elite controllers do this:

I Hope you upvote❗