Two of the biggest killers on the planet may be kept at bay with regular ginger use, especially when eaten with other key superfoods. Garlic, ginger and onions all have an anti-blood-clotting ability, yet when they’re eaten together they’re a powerful mainstay against heart attacks and stroke!

Whether we’re talking about curing a simple tummy ache or morning sickness and severe nausea from pregnancy, ginger has been used for thousands of years as an effective digestive aid and natural remedy for nausea. Recently, Taiwanese researchers discovered that three capsules (1.2 grams total) of ginger can actually help the stomach release its contents into the small intestines in people with dyspepsia — a condition in which 40 percent of patients suffer from abnormally delayed gastric emptying.

This is one reason why ginger helps people who are bloated, constipated and have other gastrointestinal disorders. It relaxes the smooth muscle in your gut lining and helps food move along throughout the system.

Proper food transport (and nutrient absorption) from the mouth out through your colon is the mainstay to health. If food gets stuck somewhere in between, it can ferment, rot or (even worse) cause obstruction, which is a life-threatening emergency.

Improper digestion can also cause improper assimilation of the nutrients in your food. Either way, both cause malabsorption, and your body suffers from nutrient deficiencies. This is why ginger is so important. Like we’ve seen above, it helps promote regular digestion and metabolism of your food and is largely responsible for promoting a strong immune system.

Ayurvedic medicine has praised ginger’s ability to boost the immune system before recorded history. It believes that because ginger is so effective at warming the body, it can help break down the accumulation of toxins in your organs. It’s also known to cleanse the lymphatic system, our body’s sewage system.

Dr. Oz says, “By opening up these lymphatic channels and keeping things clean, ginger prevents the accumulation of the toxins that make you susceptible to infections, especially in the respiratory system.” Combining ginger oil and eucalyptus oil is an effective remedy to boost immunity and improve breathing.

The Journal of Microbiology and Antimicrobials published a study in 2011 that tested just how effective ginger is in enhancing immune function. Comparing the ability of ginger to kill Staphylococcus aureus and Streptococcus pyogenes with conventional antibiotics, Nigerian researchers discovered that the natural solution won every time!

The drugs — chloramphenicol, ampicillin and tetracycline — just couldn’t stand up to the antibacterial prowess of the ginger extract. This is important because these two bacteria are extremely common in hospitals and oftentimes cause complications to an already immune-compromised patient.

Key takeaway: If you ever need to go to the hospital for surgery or to visit a friend, make sure you bring some ginger essential oil with you and add a couple drops to your water. You’re less likely to get a dangerous staph infection, and it can help speed the healing process! Other healing remedies that are effective against infections include oregano oil, clove oil and melaleuca oil.

One of the trickier issues to control because they’re increasingly resistant to conventional medicine, fungal infections don’t stand a chance against ginger. Of the 29 plant species evaluated in a Carleton University study, ginger won the prize for having the extract most effective at killing fungus.

Key takeaway: For a powerful antifungal punch, mix several drops of pure ginger essential oil with tea tree oil with one teaspoon of coconut oil, and apply up to three times a day.

Since the 1980s, researchers have known that ginger can cure stomach ulcers. More recently, Indian scientists have been able to more closely quantify this medicinal effect. In a study published in the journal Molecular Nutrition and Food Research, they discovered the ginger was six to eight times more potent than Prevacid, the drug of choice to treat GERD, or acid reflux!

Ginger is known for its anti-pain property. Very similar to how capsaicin works to relieve pain, gingerol acts on vanilloid receptors, which are located on sensory nerve endings. Similar to the initial intense burning feel you get when you consume spicy pepper, ginger’s burn only lasts but a second, and researchers discovered that it “affects the pain pathways directly but also relieves the inflammation, which in itself causes pain.”

Studies have found that ginger may even help ease dysmenorrhea, or pain associated with menstruation or menstrual cramps. One clinical trial divided female students experiencing primary dysmenorrhoea into two equal groups; researchers then gave them either a placebo or ginger in capsule form. In the ginger group, 83 percent reported an improvement in symptoms, compared with 47 percent in the placebo group. (3)

Key takeaway: The executive director of the Herbal Medicine Research and Education Centre, Basil Roufogalis, advised that, “The most likely way to administer ginger as a painkiller would be in the form of a tea taken several times a day, but more work needs to be done on the amount of ginger powder needed per dose to take effect, and the time required between doses.” For most people, taking 1,000 milligrams of powdered ginger root is effective — or two drops two times daily of ginger essential oil.

Gingerols are widely known to naturally improve diabetes and enhance insulin sensitivity. Building off this knowledge, a 2006 study out of the Journal of Agricultural and Food Chemistry discovered that they could also suppress sorbitol accumulation in human blood cells and sugar-fed rats. Simply put, ginger not only helps prevent and reverse diabetes itself — it protects against and improves diabetic complications like diabetic retinopathy!

Best Ways to Use Ginger

There are many forms and ways you can use ginger to benefit for your health. The most common forms of ginger include:

Raw Ginger — You can put raw sliced ginger (the size of your thumb) in a smoothie every morning or use it in making homemade vegetable juice.

Ginger Essential Oil — The most potent form of ginger is ginger essential oil because it contains the highest levels of gingerol. This is the No. 1 way ginger can be used as medicine. It can be taken internally to treat health conditions or rubbed topically with a carrier oil on an area of pain. Typically, two to three drops of essential oil is the recommended therapeutic dose.

Ginger Tea — This liquid form of ginger is commonly used to relieve nausea, settle the stomach and relax the body. Have one cup two to three times daily to reduce inflammation. Also, adding a bit of raw honey and lemon to the tea makes it taste great!

Ginger Powder — Using ground ginger powder for cooking is an excellent way to take advantage of this super spice. I use it in making Chicken Curry, homemade pumpkin pie and a ginger berry smoothie for breakfast. Also, it can be taken in supplement form as a capsule with the recommended dose of 1,000 milligrams daily.

Read Next: 10 Surprising Health Benefits of Celery
From the sound of it, you might think leaky gut only affects the digestive system, but in reality it can 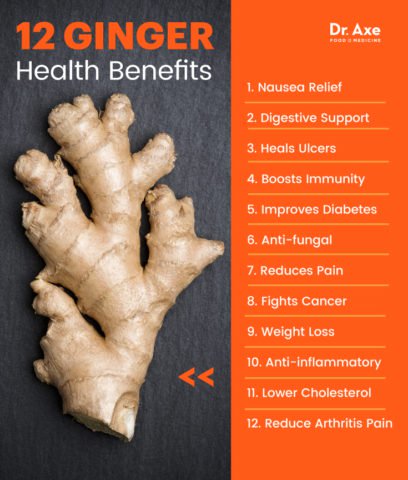