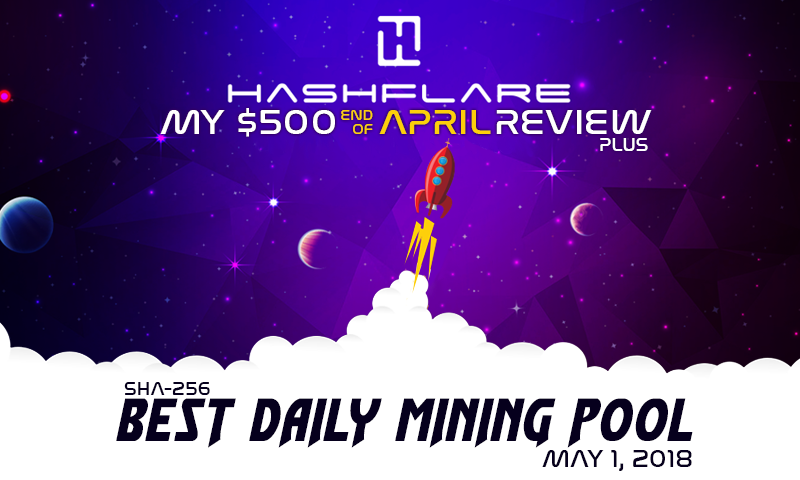 What do I say about the month of April on Hashflare? Honestly, there isn't much to say. With Bitcoin being down below $10k still, Hashflare has been performing piss poor. I'm not even going to bother showing updated charts because there really is nothing new to show from the previous month. In my opinion, if Bitcoin doesn't go up soon, I will be lucky to get my $500 investment back or the minimum withdraw amount.

I have also decided that I am only going to do a bi-weekly chart from now on as the pools are so close together that it almost doesn't matter which one you pick. In fact, you are probably better off just picking the top 3 with Antpool getting the majority of your shares. That way you'll increase your luck on payouts. I am starting to wonder if it even matters to be honest. What is the likelihood that Hashflare even changes your pool settings other than what you see on the dashboard?

I would like to also say that I am a little disappointed that Hashflare didn't compensate any of its users that paid the $2.20 rate when things were going good for them and they got greedy. Things went to shit and they dropped the price as nobody was investing or current users weren't reinvesting. I have a feeling, in the end, I might get my money back, If I do, I basically paid for Hashflare to buy mining equipment with an interest free loan. I'm actually wondering if they will stick around long enough to get my money out or if they'll exit scam.

Anyways, sign up under my referral ID and good luck... LOL!!!

Antpool is the winner!!

Antpool for those who don't know, is one of the largest mining pools available and is owned by Bitmain. Creators of the popular ASIC miners such as the Antminer S9.

You got a 7.58% upvote from @whalecreator courtesy of @uplandmines! Delegate your Steem Power to earn 100% payouts.

You received a 15.41% upvote from @dlivepromoter

@dlivepromoter is a part of the community project @dlivecommunity. We aim to help streamers navigate their way through @dlive and the overall Steem ecosystem. We are not affiliated with @dlive.
$0.00
Reply
[-]
fishbaitbot (31) 3 years ago

@fishbaitbot is luring fishes with a 39.56% upvote thanks to @uplandmines!Send 0.05SBD/STEEM or more for a free resteem along with the upvote!
Delegate to the @fishbaitbot and get 100% of the profits which is better than all upvote bots! Click on one of the following links to delegate 50SP, 100SP, 250SP, 500SP, 1000SP or 5000SP.