More benchmarks on the TITAN V & 1080 Ti for BOINC

So this is just a quick follow-up to my previous article on the TITAN V. This time I’ve decided to try to benchmark the rest of the whitelisted GPU projects that give NVIDIA work units, and of course I’ll be running my 1080 Ti at the same time for all tests again. See my previous article if you’d like some more details on how the TITAN V stacks up to the 1080 Ti.

So the testing rig is of course exactly the same.

Testing was conducted at 27C ambient and both GPUs were overclocked using the below settings in MSI Afterburner 4.40 using NVIDIA's 390.77 driver. 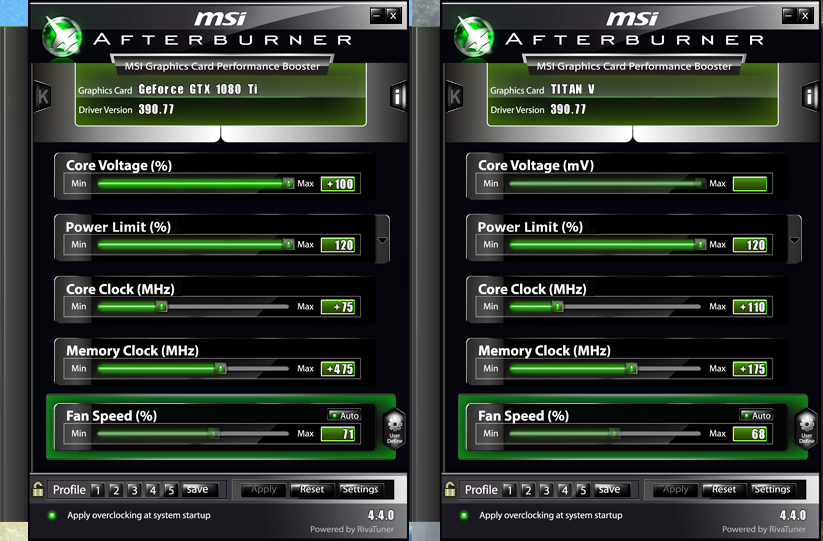 For each section, I’ll be showing a screenshot of:
• The BOINC Manager window, showing the completion time for the TITAN and the relative progress of the task running simultaneously on the 1080 Ti.
• HWiNFO64, to show power draw and other statistics.
• MSI Afterburner’s sensors to show GPU usage, power draw (as a percentage of TDP) and temperatures over time.

I couldn’t get Asteroids to attach to my BOINC Manager, and SETI refused to send me NVIDIA work units for whatever reason. So we’re 0 for 2 on that score. So, I know Moo isn’t on the whitelist any more, but I thought I’d toss it in here as a bonus since the previous four projects didn’t work. Similar to Enigma from the previous article, both the TITAN and 1080 Ti crunch at the same rate, indicating a bottleneck elsewhere.

Now I intentionally saved the best for last here, as these results are somewhat surprising. For Amicable, I’m using the 10^20 GPU work units with a kernel size of 22. Now it’s worth noting that Amicable sends batches of work units, that vary in their time to complete. It seems the main way to distinguish between batches is by looking at this number in the green highlight here in the work unit name.

Henceforth I’ll distinguish them by this number, so for example, Amicable 518. In my testing I encountered three types of work units: 518, 3148 and 6141. I have no doubt that there probably countless other types, so unfortunately this data won’t be 100% representative of total Amicable output. 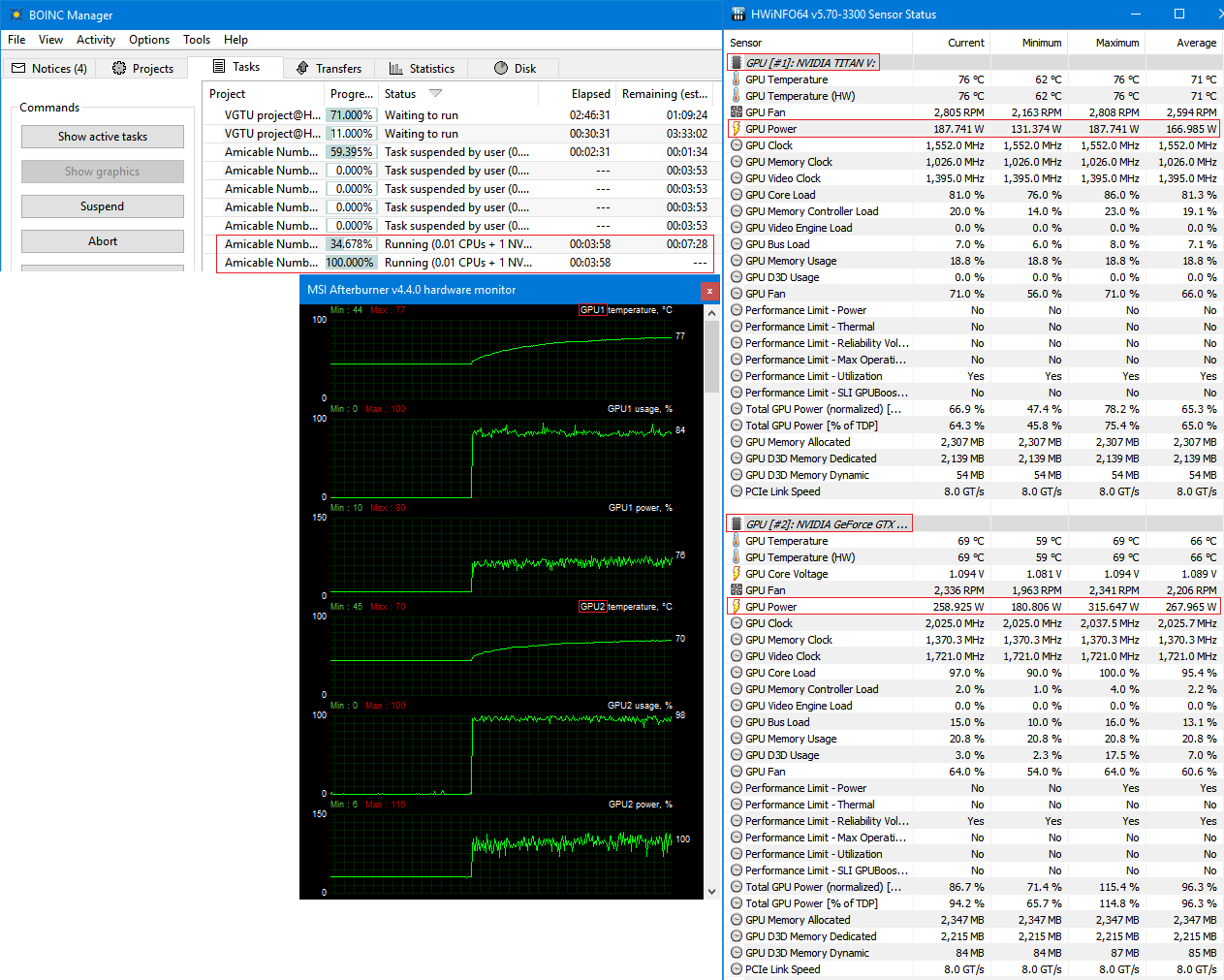 So just like with Collatz, the TITAN seems to outperform the 1080 Ti by a factor of three or more. Power consumption is still significantly lower than the 1080 Ti, averaging about 60W less. Of particular note is the exceptionally short time to compute the 518 & 6141 WUs on the TITAN.

The estimated max RAC for each project was calculated as:

The estimated max magnitude was calculated from multiplying mag/RAC by the above figure. Mag/RAC was calculated from analysing project statistics on gridcoinstats.eu’s website. These estimations are of course a rough approximation, and may not be entirely accurate.

Amicable, the best project for the TITAN?

So initially I was going to publish this article on the day after I published my previous TITAN article, but I was unhappy with the conclusion I had drawn from the data above, and thought the Amicable results warranted some further investigation. So to get a much more accurate assessment of estimated RAC for Amicable, I left my TITAN crunching Amicable for 24 hours straight, with no interruptions. I also changed the app_config.xml to allow two work units to be run simultaneously to slightly increase output, because it appeared there was a small downtime between work units where the GPU wasn’t in use. So to calculate the estimated RAC, we’ll find the difference in total credit, add validation pending work units (assuming they will all validate, which they probably will), and then we’ll have total credit delta, from which we can estimate magnitude.

At 235.15 magnitude, Amicable looks to be the most profitable project for the TITAN. Let’s collate all the data in a new table to compare the results:

Now I’ve included a “Milkyway 16 WU” entry in there to roughly estimate what the magnitude would be if Milkyway actually worked properly, and I was able to run 16 WUs concurrently, just to show the potential of the TITAN. So currently, looks like Amicable is the most profitable, whilst Milkyway with 8 WUs is just barely more efficient.

According to these numbers, Amicable’s probably the best project for the TITAN at the moment, given that Milkyway doesn’t push it to its full potential. The magnitude estimate here is roughly 60 higher than any of the other projects, so sorry Milkyway, looks like I’ll be discovering Amicable pairs until your NVIDIA app becomes more optimised.

What I see there is a lot more than just 3 listed types of work units for Amicable Numbers. I expect these numbers might be batch numbers rather than WU types (worth to find out), but those numbers don't seem to be in order. See also AN WU optimization.

These are some huge RAC numbers, lol. I have expected for 1080 Ti to reach ~1M RAC, 4M surprised me, but you haven't re-tested it. 6M for Titan (after re-test) seems reasonable.

Ah I didn't mean to imply types of work units like PPS-Sieve vs GFN on PrimeGrid, I guess the word I was looking for was batches. I think you're absolutely correct, and I'm going to update the article with that correction.

I do remember reading that article a while back, I guess 518 and 6141 in this article are examples of more GPU-optimised work units, whilst the 3148 is less so.

OK, I have 1st hand explanation for WU naming in the Amicable Project.

Conclusion - It's only a coincidence than 518 WUs took much shorter time than 3148 WUs.