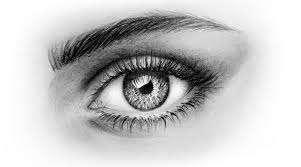 In humans, the pigmentation of the iris varies from light brown to black, depending on the concentration of melanin in the iris pigment epithelium (located on the back of the iris), the melanin content within the iris stroma (located at the front of the iris), and the cellular density of the stroma.[4] The appearance of blue and green, as well as hazel eyes, results from the Tyndall scattering of light in the stroma, a phenomenon similar to that which accounts for the blueness of the sky called Rayleigh scattering.[5] Neither blue nor green pigments are ever present in the human iris or ocular fluid.[3][6] Eye color is thus an instance of structural color and varies depending on the lighting conditions, especially for lighter-colored eyes.

The brightly colored eyes of many bird species result from the presence of other pigments, such as pteridines, purines, and carotenoids. Humans and other animals have many phenotypic variations in eye color. The genetics of eye color are complicated, and color is determined by multiple genes. So far, as many as 15 genes have been associated with eye color inheritance. Some of the eye-color genes include OCA2 and HERC2. The earlier belief that blue eye color is a simple recessive trait has been shown to be incorrect. The genetics of eye color are so complex that almost any parent-child combination of eye colors can occur. However, OCA2 gene polymorphism, close to proximal 5′ regulatory region, explains most human eye-color variation. Eye color is an inherited trait influenced by more than one gene.These genes are sought using associations to small changes in the genes themselves and in neighboring genes. These changes are known as single-nucleotide polymorphisms or SNPs. The actual number of genes that contribute to eye color is currently unknown, but there are a few likely candidates. A study in Rotterdam (2009) found that it was possible to predict eye color with more than 90% accuracy for brown and blue using just six SNPs
People of European descent show the greatest variety in eye color of any population worldwide. Recent advances in ancient DNA technology have revealed some of the history of eye color in Europe. All European Mesolithic hunter-gatherer remains so far investigated have shown genetic markers for light-colored eyes, in the case of western and central European hunter-gatherers combined with dark skin color. The later additions to the European gene pool, the Early Neolithic farmers from Anatolia and the Yamnaya Copper Age/Bronze Age pastoralists (possibly the Proto-Indo-European population) from the area north of the Black Sea appear to have had much higher incidences of dark eye color alleles, and alleles giving rise to lighter skin, than the original European population

Most babies who have European ancestry have light-colored eyes before the age of one. As the child develops, melanocytes (cells found within the iris of human eyes, as well as skin and hair follicles) slowly begin to produce melanin.[citation needed] Because melanocyte cells continually produce pigment, in theory eye color can be changed. Most eye changes happen when the infant is around one year old, although it can happen up to three years of age.[25] Observing the iris of an infant from the side using only transmitted light with no reflection from the back of the iris, it is possible to detect the presence or absence of low levels of melanin. An iris that appears blue under this method of observation is more likely to remain blue as the infant ages. An iris that appears golden contains some melanin even at this early age and is likely to turn from blue to green or brown as the infant ages.

Changes (lightening or darkening) of eye colors during early childhood, puberty, pregnancy, and sometimes after serious trauma (like heterochromia) do represent cause for a plausible argument stating that some eyes can or do change, based on chemical reactions and hormonal changes within the body.

Studies on Caucasian twins, both fraternal and identical, have shown that eye color over time can be subject to change, and major demelanization of the iris may also be genetically determined. Most eye-color changes have been observed or reported in the Caucasian population with hazel and amber eyes.

If you're going to just copy stuff from other websites, put a source.