Have you heard of this Cannibal Restaurant? They make no bones about what they are doing! Some say it's tongue in cheek. Many questions raised!

artistiquejewels (59)in #greatawakening • 4 years ago (edited) 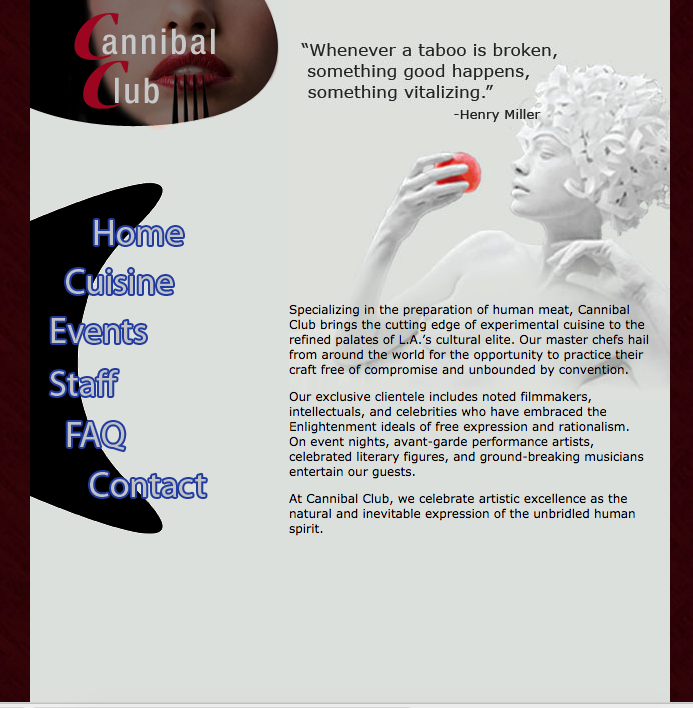 At first glance you think, this must be tongue in cheek! Sadly, whether you believe they are really doing this or not, they are a registered business. Why would they fund the cost of registering this? Some also say these are stock photos. Some of the people mentioned do exist and have interesting connections to the occult or institutions known to be luciferian in ideology. Could this explain where so many of the missing go? Or are they trying to mock pedogate (started out as This is what their description on their page if you duckduckgo and put cannibal club in the search bar. "Collaborating with visiting cooks from around the world,

Chef de Cuisine Sophie Laffite regularly updates our menu with new and daring culinary experiments. The meat we serve is selected from the young and healthy. Consistent with the practice of cannibalism in many primitive societies, we view anthropophagy as homage to the dead, who are reborn into the bodies of their consumers. Each dish, therefore, is a study in taste and elegance."

This is what you will find on their FAQ Page

When prepared by us, unbelievable. Of the meats you are likely to find in stores, pork is the closest match.

Where do you get your specialty meat?

Our avenues of procurement vary. Most of the businesses and institutions who supply us prefer to keep those relationships discreet. On the individual level, bodies are often bequeathed to us. For some, this is a way to supplement life insurance and offset funerary expenses. For others, such as Cannibal Club member Gwendoline Fenwich, who was served to her friends and relatives at the Club in January of 2008, being prepared as a meal, and thereby reborn into the bodies of the living, is an attractive alternative to the more the traditional practices of burial and cremation.

We take considerable care to ensure that all our meat is produced legally and ethically, and derived only from young, healthy bodies.

Cannibalism, as traditionally practiced, usually shows respect to the deceased, who is desired to be reborn into the living, or offered as a worthy sacrifice to some deity. It is never our practice to debase or objectify human life. Arguments against cannibalism are typically grounded in ignorance, cultural prejudice, and nonsensical spiritual beliefs.

Prion diseases of the nervous system, such as kuru, are associated with the consumption of brain tissue, which is not part of our menu. Here is a link, notice it's .org http://cannibalclub.org/index.html

Let's take Sophie Laffitte, there is a restaurant by this name in France, it is also well known that a Cannibal Club exists there too. So whether just tongue in cheek or something more sinister, it is interesting. http://www.lecafedesophia.com/restaurant

There was an Elspeth Blake, but I found someone with the name Elspeth Leech-Black who works in the Hospital and Health Care Industry in none other than Washington D.C. It seems having a job as an Executive Coordinator for MedStar National Rehabilitation Network. Could this be Elspeth this Cannibal Club based it's Elspeth on? Is it a character or based on reality? It would seem useful for a Cannibal Club that these organization offers both inpatient and outpatient care. Whether the Cannibal Club payed to be a licensed business just to taunt people, and mock pedogate researchers, this Medstar Rehabiliation Center is a rather frightening place according to their customer reviews. https://www.yelp.com/biz/medstar-national-rehabilitation-network-washington?adjust_creative=dWJMtmYxpd5N5yoyzSuhtA&utm_campaign=yelp_api&utm_medium=api_v2_business&utm_source=dWJMtmYxpd5N5yoyzSuhtA&hrid=SR4t2dkczoRShAmFTJsOtQ

The entertainment they mention as Diamanda Galas has connections to Marina Abramovic a self proclaimed witch and occultist. She was called out in the wikileaks for what she too claims are mock rituals involving effigees of children being burned and talking about cutting, feeling the pain. Now why would one burn a child even if a figure? She also talks about using body fluids for consumption and in depicting artwork. Marina Abramovic is a fan of Diamanda Galas. She refers to her in this article https://www.theguardian.com/music/2012/jul/30/meltdown-2012-marina-abramovic-interview

Here is Marina Abramvic feathered in an elitist Moca Gala dinner. They definitely use art (doesn't make art back obviously, but rather nefarious people) as a conduit!

Be careful when you view the following, Not for Little Eyes or Ears as this gives nightmares to grown people so little ones do Not need this trauma.

The following from my Cannibalism being heralded as a solution for global change research article,

Concerning Hollywood and elites in the entertainment industry signaling, using predictive programing to normalize. . . do you remember the Moca Gala event in 2011 where they disguise their pedophilic and cannibalistic rituals under a "party" and "art."

Ask yourself Why are they doing this? WHY would you have nude cakes and mock eating a human body? Do a ritual out of cutting out the heart?

Beware sick stuff here so obviously shield from little eyes. This also allows you to see some of the people society worships and how they party. This is the mild side of it from what eye witnesses tell us. This appears to be a way to seed the conscience and get more people to normalize cannibalism and more depravity.

Beware these people are sick, so Not meant for little eyes,

Also fascinating is yet another Cannibal Club in Reading, Pennsylvania. Their annual sales volume is 501,000 to almost a million. Why would you name a company that provides medication management and mental health services Cannibal Club? Also quite interesting that employee size is listed from 1-4, but actual size is 2.

https://www.chamberofcommerce.com/reading-pa/45690772-cannibal-club . They are also listed here as a civil and social organization https://steemit.com/greatawakening/@artistiquejewels/have-you-heard-of-this-cannibal-restaurant-they-make-no-bones-about-what-they-are-doing

This article was interesting https://atrueott.wordpress.com/2018/01/13/ . It comes complete with links on the history of cannibalism like this https://people.howstuffworks.com/cannibalism.htm

Some hypothesize this could be a link to how they procure some of their supplies http://www.dailymail.co.uk/news/article-2516076/Chinese-build-baby-box-parents-dump-unwanted-newborn-children.html

No matter what you think, it is impossible to ignore videos like the Katy Perry Bon Apetite video and the fact that Hollywood has been striving to desensitize people to cannibalism in shows like Santa Clarita Diet where they make it humorous and relatable.

Also taken from cannibalism as a solution research,

Now think of all the songs, bands, groups who have sung about Satan, hell, a party in hell, killing and songs like Katy Perry's Bon Appetite, where they prepare her for cooking. Why do they enjoy these things? Is this the kind of art you like? Why do they want to normalize such wicked behavior? Their fans Love it because, "hey it's just funny!" They're constantly justifying their consumption of this kind of content because it's "not real, just for art and humor."

Have you seen this suggestive video where satan plays with two of his favorite ways to degrade humans. . .through twisting sexuality and the eating of God's creation. . .as He made man in His own image which is Why satan hates humans so much, but dupes those who follow him into thinking he is "helping" them. If satan is advocating to eat those created in the same manner You are created. . .is he really For you or Against you?

Passed off a family comedy and likely many families aiding in the "programming" of their children, seeding the conscience that, it's just another lifestyle! . Signs of the times?

Check this one out if you're not familiar then consider the following,

Sadly, cannibalism is part of every day life in some countries along with violence like rape and torture. Truly doesn't seem like a topic anyone should be taking lightly and poking fun at. Satanic Ritual Abuse takes on the form of cannibalism and consumption of the young, they believe they obtain power. It is a demonic type of power as Satan feeds on humans taking God's greatest creation and sinning against God by corrupting it in the most vile form possible.

This video was made in 2009. Pretty odd, but then again, people have been practicing these rituals literally since the beginning of time!