Podrick Payne is a distant cousin of the more famous Ser Ilyn Payne, the King's Justice, and member of a lesser branch of House Payne.

Tyrion has Janos Slynt as a dinner guest in the dining room of the Tower of the Hand. Podrick pours wine for them, but spills the beverage on Janos's hand. Janos begins to chastise the boy, but Tyrion dismisses him and says they know how to pour their own wine. 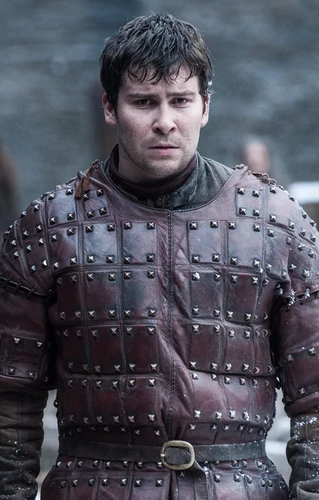 Bronn reminds Tyrion that he still owes Podrick for having saved Tyrion's life. Tyrion then brings Podrick to Littlefinger's brothel and pays for three prostitutes (Marei, Genna, and the contortionist Kayla) to take Podrick's virginity. Podrick later returns with all of Tyrion's coins as the prostitutes enjoyed the experience so much that they did not want any payment. Tyrion and Bronn are amazed and insist that Podrick tell them everything that happened, in "copious detail".

Bearing the king's banner, Podrick awaits the arrival of Prince Doran Martell of Dorne along with Tyrion and Bronn. As the Dornishmen approach, he correctly identifies the heraldry of several Dornish houses, to the approval of Tyrion. Bronn replies that he needs a sigil. When they learn from the envoys that Doran's brother Oberyn Martell has come to the city instead, and that he arrived before dawn, Podrick accompanies Tyrion and Bronn to Littlefinger's brothel to greet Prince Oberyn and his paramour, Ellaria Sand.