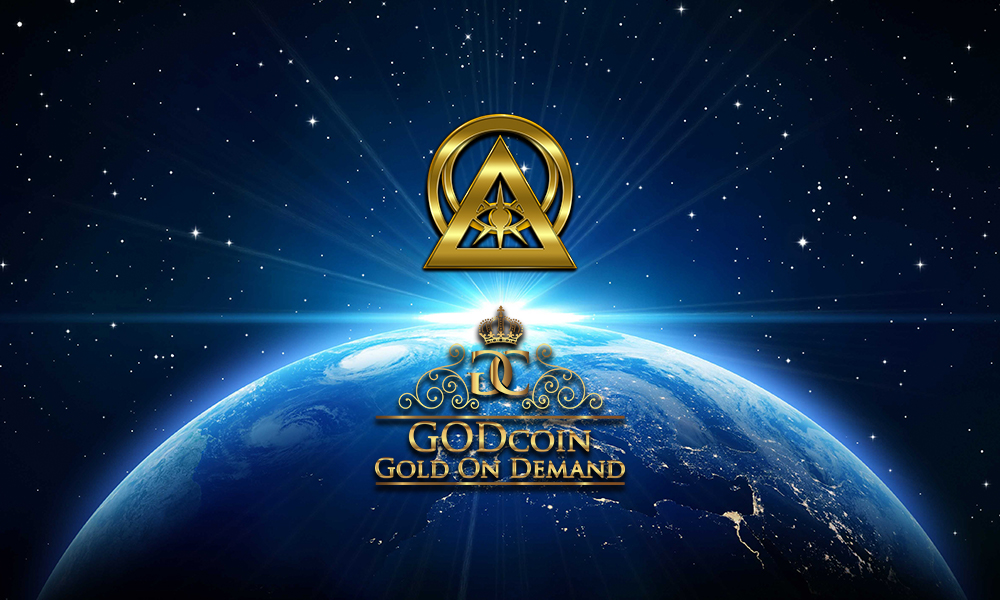 THE OFFICIAL COIN OF CHRIST – GODcoin

The Lord declared that the gold and silver is His! He tells us to buy from Him so that we may prosper. GODcoin is here to unite the world under a single currency. Stability will be provided to the world with a currency backed by physical gold and silver now under God's rule.

GODcoin will be the perfect currency, because it is the currency of Christ. It will be the currency of His new Government, which will be established very soon, and it will eliminate all other currencies, leaving it to be the only formally accepted form of money.

The official ICO launch is planned for March 31st on the website at https://godcoin.gold

View the history leading up to the whitepaper

GODcoin is the Divinely Ordained Currency of the New World, and will be the One World Currency which will unite everyone. It will be used for the process of earning and spending, but with a different system than today.

Ultimately, all things come from God, but this is the official coin issued through Christ's command.

GODcoin is the official coin of the realm for the Kingdom of Christ that is being established right now. It is endorsed by God the Heavenly Father, and issued by the Messiah.

Christ is here now, and His New Kingdom is imminent. GODcoin will be the Coin of the New Realm, so this currency will soon absorb or remove all other currencies. It will mostly take the form of a digital currency (cryptocurrency), but with added stability of being backed by Gold and Silver hard assets. In short, it will be the perfect currency.

Christ has already declared the Gold to be His in fulfillment of Haggai 2:8. Once He assumes control over precious commodities, a permanent exchange rate will be set between GODcoin and Gold, which will stabilize the currency.

7. Why should I buy GODcoin?

Because it's the only choice to prepare for. The Lord instructs you to buy Gold from Him, in Revelation 3:18. He says this because very soon there will be no other authorized currency in circulation, so everyone will eventually have to accept it only as a wage, just as they do with other forms of money today. However, those who wisely buy GODcoin now while it is still in the open market phase will amass greater wealth as the value of the coin increases.

Deuteronomy 5:33 Walk in obedience to all that the Lord your God has commanded you, so that you may live and prosper and prolong your days in the land that you will possess.

In its initial sale, GODcoin will be available for purchase at the open market value (link). Once Christ takes His Throne, and He consolidates all world currencies and commodities under His authority, the Coin will then be issued as fiat, which will only be earnable as a wage, so the time to buy is now, before it is too late!

However, it is prudent that you be a follower of Christ, and be obedient to his commands, to receive this Coin and its benefits. Otherwise, the 'outer darkness' will be the only other option, where you will have to fend for yourself, or be a slave, in a savage environment. This may sound harsh, but this is biblical prophecy of outer darkness that is already shown to be forming, so the wise will walk in Christ's ways, and be obedient to his commands.

We are simply telling all inhabitants of the world to prepare, and if they're wise, to invest. As the Lord would say, "Choose wisely".

Combining religion and crypto is like the scam heaven

Everyone will soon see all the monetary markets collapse which will leave people in a state of panic. The crypto was established as a base for the new currency. Godcoin founded on Gold and Silver is far far stronger than any crypto to date. It will consume all other cryptocurrencies and give an extreme strength to the new economy that the New Kingdom shall have.

Great news!! The currency of Christ will be launch shortly!!

Congratulations @godcoin, you have decided to take the next big step with your first post! The Steem Network Team wishes you a great time among this awesome community.

This is honestly some of the best news I've ever heard. GODcoin is about to arrive!!

Hi, I upvoted and followed you :)

This is awesome, great work!

Fantastic news in the making. Thank you, Father.

Gold on demand and backed by God. You can't beat that!

Is the pope backing godcoin and does godcoin back the pope?

Even better than the Pope - the Prime Cleric backs GODcoin.

I honestly cant tell if you guys are really religious, convincingly in character trolls or psycho cultists. Either way followed. Peaked my interest.

We are religious and working for the Lord. More to come...stay with us!

We probably appear as crazy as those who believed The Lord 2000 years ago. But we will be proven right again, you'll see. ;) Thanks for following!

This is literally ordained from God

So its based on what, a proof of prayer algorithm?

It was sarcasm sir. @abn

This is amazing! I can't wait to see GODcoin grow quickly!

Fantastic news, the one world currency of the New Kingdom.

The world can't have this soon enough. Pretty soon, it will realize as much.

I would rather see this concept applied to the hemp plant as backing of value since it is a renewable source and basically anyone could grow it.