The Cataclysmic Floods of the Last Ice Age: Pacific Northwest

In todays world, it’s hard to imagine the far reaches of the United States being covered in ice. It was only 12,000 years ago that massive sheets of ice, known as the Last Glacial Maximum, scoured the lands of America, which spread from Washington state to New York and as far south as Illinois. The glacial landscapes left behind from these slow moving behemoths (e.g. cirque, trough valley, esker, kame, kettle lakes, etc.) are proof of their existence. However, in Washington state of the Pacific Northwest, there is a peculiar topography that left many geologists puzzled for the better part of the 20th century. This landscape is known as the Channeled Scablands. 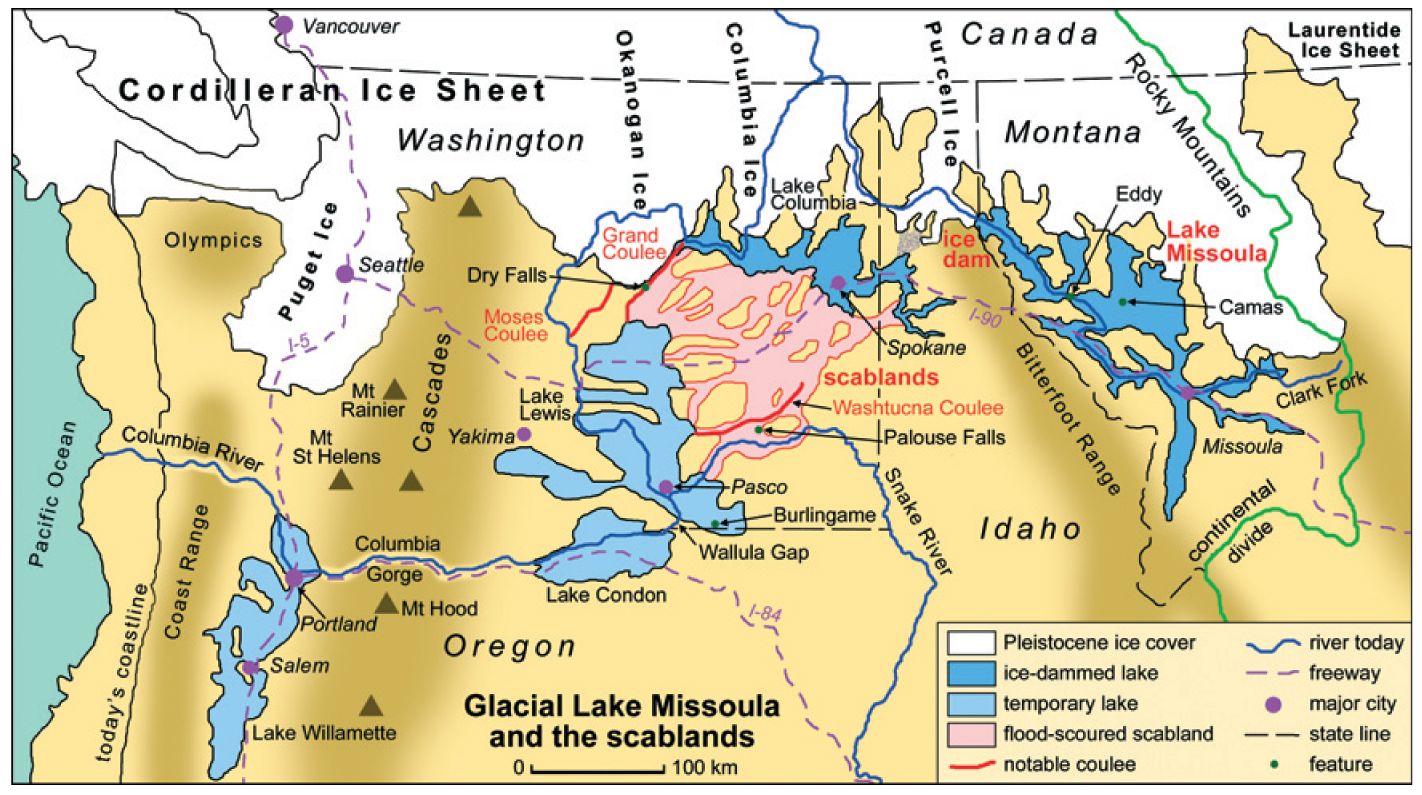 This simplified map shows the flood waters of the Missoula Floods during the last age. Note how widespread these floods were. [Image Source]

When discussing topics of a geological nature, the concept of gradualism is generally applied. This means that a process of gradual, yet consistent changes, rather than sudden or violent changes, gives us the landscape we know and love today. In the early 20th century, many geologists followed the strict principles of uniformitarianism when trying to understand geological formations. Very rarely were formations seen as being a product of catastrophic consequences, with the exception of earthquakes and volcanoes. Therefore, the idea that a certain landscape may be the product of such a catastrophic event, was often casted out as being outlandish. Nevertheless, the Channeled Scablands in Washington state, was one landscape in the United States that couldn’t be explained through uniformitarian theories and it became the epicenter for a rocky debate that is technically ongoing, but has become far less shallow. This satellite imagery of the Pothole Coulee Cataracts in Washington state shows the shear power of the Missoula floods. Note the farmland above the canyons. Most of this region is in fact a plateau, so these formations stand out. [Image Source]

It all started in 1922, when geologist J Harlen Bretz began conducting a survey of the Columbia River Plateau. His interest in this region had propagated roughly a decade earlier when he saw a topographic map of the area that showed unusual erosion markings, such as the Potholes Coulee Cataract, pictured above. It was Bretz who called this area near Grand Coulee, the “channeled scablands.” The reason being is the topography of the region was practically soil-free and consisted of large dry flood channels that formed steep canyon sides. It was clear to Bretz that some form of epic fluvial erosion was the cause for the large downcuts into the flat-lying basalt, the lack of other soils (e.g. loess) and glacial erratics spread across the region.

In 1925, Bretz suggested in a publication that short, yet cataclysmic water flows, which he called the “Spokane floods,” were the cause of the massive erosion that stood out like a sore thumb on the Columbia River Plateau. The only issues with his theory were that he had no idea where the floods actually came from and it called for a catastrophic explanation. It wasn’t until 1927 that Bretz was invited by the Geological Society of Washington D.C. to present his hypothesis, but it was encountered with tough resistance in the geological community of that day; largely because it went against the prevailing view of uniformitarianism. However, at that meeting, Bretz met fellow geologist J.T. Pardee, who claimed to know the source of Bretz’s infamous Spokane floods. 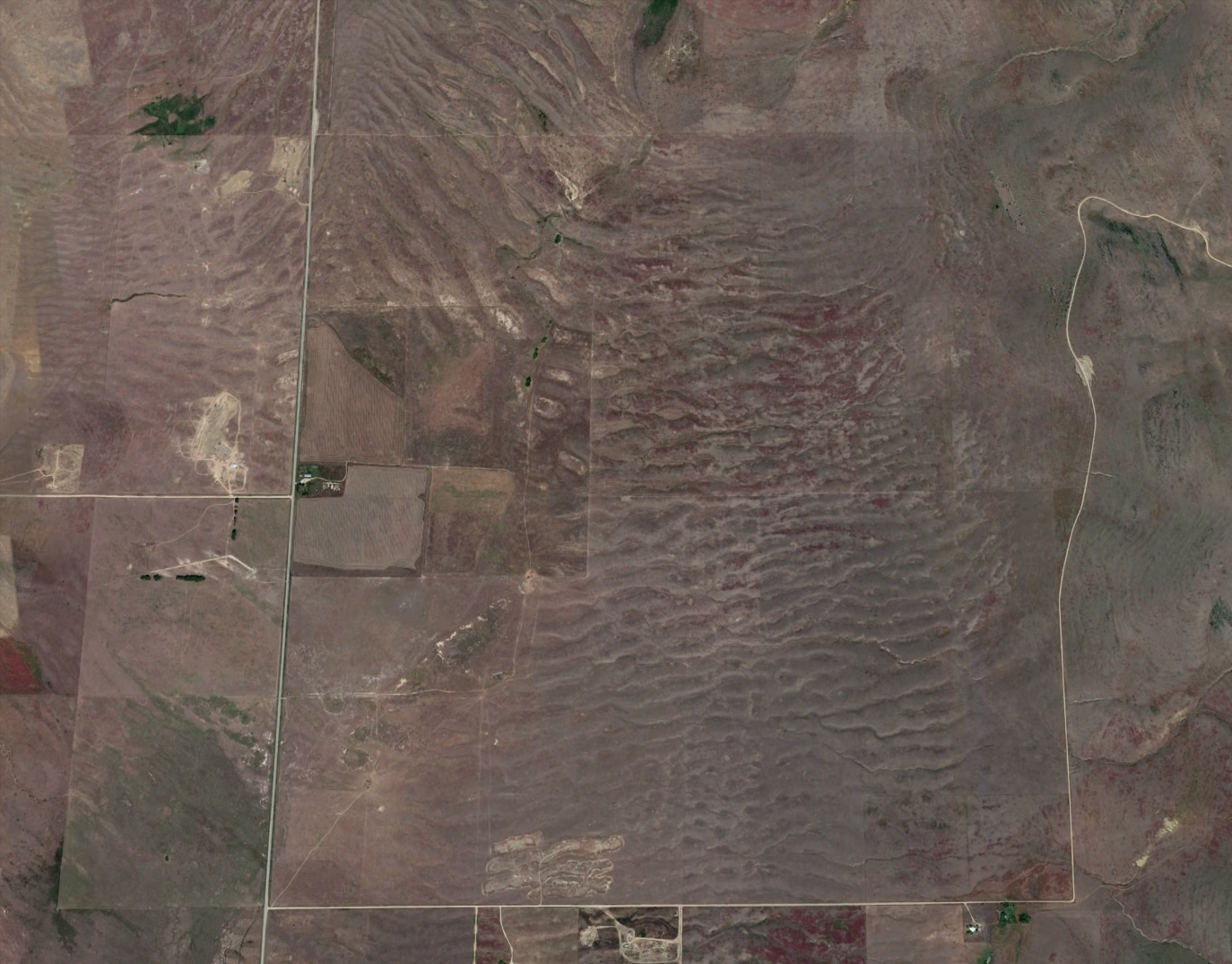 This satellite imagery of the Flat River valley displays the giant current ripples created by the massive release of water caused by the rupturing of the Missoula Lake glacial dam. [Image Source]

About 250 miles northeast of where Bretz was conducting his survey of the Columbia River Plateau, J.T. Pardee was conducting a survey of his own in a valley created by the Flathead River in northwest Montana. It was already clear to Pardee that the valleys of this region were in fact a giant lake (Glacial Lake Missoula) at one point in their history, due to the water marks along the mountain sides caused by wave erosion. It was at the valley formed by the Flathead River, that Pardee saw something very peculiar on the valley floor. He saw what could only be described as giant current ripples, very similar to what you would see on a beach or the bottom of a river, except these were 3-40 feet in height. Furthermore, he saw massive boulders spread across the region. Between the giant current ripples and boulders, Pardee concluded the massive lake must have emptied at an exponential rate at some point in its history. What was more intriguing, is that the ripple currents in this region pointed straight towards the Channeled Scablands. The only thing that puzzled him and his colleagues was exactly how the lake had emptied so quickly. This detailed map will give you a better idea of the impact of the Missoula Floods on the Columbia River Plateau. [Image Source]

During the last ice age, between 15,000 and 13,000 years ago, the southern encroachment of the Cordilleran Ice Sheet (glacier) into the Idaho Panhandle crossed the valley formed by the Cross Fork of the Columbia River. As a result, a massive ice dam that was half a mile tall and 23 miles wide blocked the rivers flow. Overtime, the valleys upstream from the Clark Fork would begin to fill, creating a lake with depths of at least 1000’ and that would contain more water than Lakes Erie and Ontario combined!

Today, scientists understand why this ice dam eventually ruptured, which caused glacial lake outburst floods that would spread from the Columbia River Plateau to the Columbia River Gorge, all the way into the Williamette Valley in western Oregon. While geologists such as Bretz and Pardee concluded it was one massive flood, it would later be discovered that the glacial ice dam that formed Glacial Lake Missoula ruptured roughly 40 times over the course of 2,000 years in 55 year increments. Furthermore, these floods would sometimes travel at speeds of 36 meters/second (130 km/h or 80mph), which helps explain the glacial erratics (boulders) spread throughout the region and the massive erosion that took place at the Channeled Scablands. It should be noted much of this information was obtained through research performed as late as the year 2000! 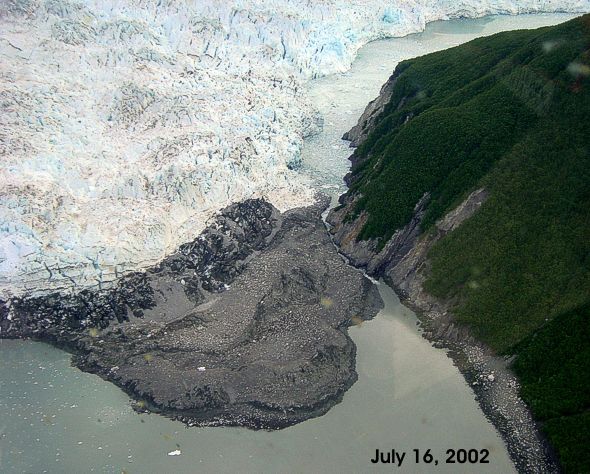 This aerial photo of the Hubbard Glacier in Alaska, shows it crossing over the Russel Fjord. As a result, the glacier formed an ice dam. In this instance, a rupture in the dam would be called a Jökulhlaup. [Image Source]

Overall, this was a very fun topic for me to cover— albeit, a bit longwinded. I felt like it could have fallen in my oddball geological features category, but as I began to write about it, I realized this was more of a historical post. With that being said, the Missoula Floods of the last last ice age go to show how powerful nature can be, while also showing how complex the geology of our planet is.

If you enjoyed reading this post, be sure to give me a follow and check out the rest of my blog. Overall, my blog consists of scientific topics dealing with geology, meteorology, food and history. The goal of this blog isn’t to earn money per se. While that is a nice benefit, I’m more interested in networking, learning, informing and helping the Steemit community grow to new heights. Thanks for all your support!

Nice work @keephy! A pleasure to see such valuable posts in my STEEMIT feed. :)

Thank you! This was a super informative topic for me. I learned quite a bit while doing research on it. I’m glad you enjoyed it. :)

I am a geologist and this is really interesting. Take a look at my page to see the kind of geology I do in my area.

$0.03
2 votes
Reply
[-]
geopolis (54) 4 years ago
Your post has been personally reviewed and was considered to be a well written article about geology!
You received a 80.0% upvote since you are a member of geopolis.
To read more about us and what we do, click here.
https://steemit.com/geopolis/@geopolis/geopolis-the-community-for-global-sciences-update-3
If you do not want us to upvote and comment on your posts concerning earth and earth sciences, please reply stop to this comment and we will no longer bother you with our love ❤️
$0.03
1 vote
Reply
[-]
jaymesbawned (46) 4 years ago

Thank you very much! This topic was definitely an interesting one to write about. Given the complexity of it all, I’m fairly certain I’ll be revisiting this topic in a future post.

It is a lot to dig into, and hard to get through it all in one post!

The Missoula Floods are awesome! Have you read the book Bretz's Flood?

I've actually done a couple posts related to the floods, but from the perspective of discussing uniformitarianism vs catastrophism, not from just a direct discussion of them.

After doing the research on this, I’ll definitely have to give that book a read. Honestly, this topic was chocked full with knowledge. The reason I decided to write about it is because my father (who is a geologist at heart) described what he thought of the regions topography when we travelled to the PNW as a family in the late 80’s. I was only a newborn at the time so I have no recollection of the region unfortunately.

Just learning about the uniformatarian vs catastrophism aspect of this geological discovery was a joy. It was actually difficult to find information on the subject in only one place. I had to piece this article together from a variety of sources. On top of that, I had to be careful which information I chose to include. It would appear some people are still under the impression only one massive flood caused the formation of the Channeled Badlands. All being said, I can’t wait to visit this region in the near future.

Interesting geologic theories. But I happen to know from the Ice Age movies that the dam rupture was caused by an archaic squirrel trying to get a nut.

Hah! I haven't seen that movie in years.

Awesome piece....let my kids read it...they are on these topics with homeschooling and loved it

Very detailed analysis. I’ve also studied the unique topography of western North America as well. I’m not as familiar with the Grand Coulee area specifically, and that’s why this post was very informative to me. While I agree with your well thought out thesis, are you familiar with the theory of asteroidal impacts that sped up the end of the last ice age? This was for a long time a very fringe theory, but is beginning to gain some traction in academic circles.