I had my ancestry DNA done by 23andme. It turns out I have Neanderthal DNA.

Apparently, there were three different types of humans. Homo sapiens (that's us, the one type that survived), Neanderthals, and hom erectus.

23andMe tests for Neanderthal ancestry using 1,436 markers from the genome. 23and Me report on the total number of Neanderthal variant copies -- between 0 and 2,872. However, the most 23andMe has found so far is 397. 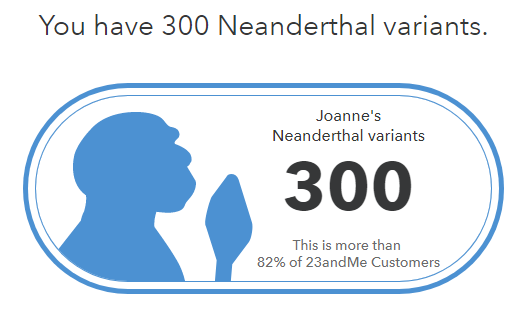 If you have Neanderthal variants, you have a direct Neanderthal ancestor. That ancestor would be grandparent to the 250th degree.

According to the report, I do not have markers for having less back hair, being a little shorter, and having straighter hair than average. Oh, and I am also no less likely to sneeze after eating dark chocolate than average.

Overall, here is where my ancestors are from: Well, aren't you special? Yes! That's very cool. I am amazed at the science behind all of this. (I am no good at science.)

I barely grasp science but I am fascinated at the Neanderthal blood in my veins. I was not surprised that my ancestors were mostly European. We've only been on Prince Edward Island since the late 1700s, early 1880s.