A vegetable garden needs flowers, not many, just a few to attract pollinators, add visual appeal, especially if the garden is situated on a front lawn. this iris is one of several in my old Campbellton Community Garden raised bed. I found the bulbs cast aside at the garden three years ago. Planted them in one corner to see what would happen and this picture shows the result. 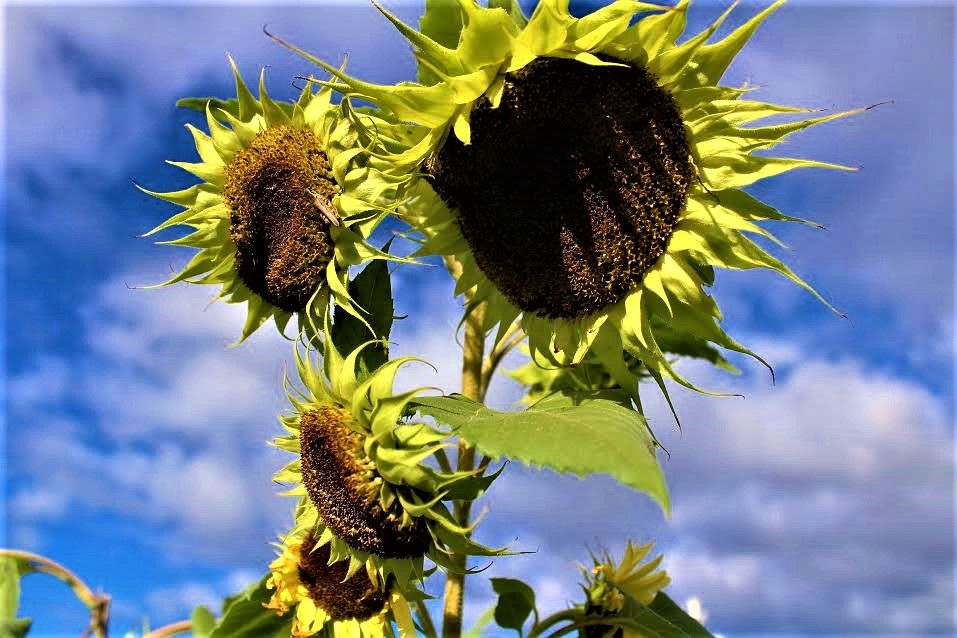 Sunflowers are a personal favourite. While I find it impossible to pick only one plant, the sunflower offers so much that only a small number of the gardens I have built over the years did not include. From children’s forts to cleaning up radioactive waste, sunflowers are a very versatile and beautiful plant.

Floating rafts of sunflowers were used to clean up water contaminated as a result of the 1986 accident at the Chernobyl nuclear plant in the former Soviet Union. The roots of the sunflower plants remove 95% of the radioactivity in the water by pulling contaminants out of the water.

There are even giant sunflower competitions just as there are giant pumpkin competitions.

All the gardens that I have created for either myself or others have all had at least one sunflower; this includes balcony gardens. Mind you the ones that I grew on the balcony where a miniature hybrid not the up to the twenty-foot tall monster that grabs your attention in later summer

Sunflower (Helianthus annuus ) is an annual herb that can withstand mild frost as a seedling but requires at least 100 frost-free days for normal development. Intolerant of shade, sunflowers can be successfully cultivated in many countries.

Sunflower was considered to be a folk remedy and used for a number of ailments such as blindness, bronchitis, colds, coughs, dysentery, fever, influenza, fractures, malaria, rheumatism, snakebite, splenitis, and general wounds.

The one I planted in the community garden self-seeded so profusely I had to pull the young plants. I gave away a few the others went to the compost pile.