Writing up the pea pollen post reminded me of the snow pea seeds that I purchased a long time ago which I had not yet planted. It was a good reminder because the package says to sow by August 2018.

The reason why I wanted to grow my own snow pea was for their shoots to fry up to eat. It would be easier and probably cheaper to just buy the snow pea shoots but I thought I would try growing my own. The seed I purchased are from Mr Fothergill’s Seeds. The instructions indicated three different ways to grow them. First is using Mr Fothergill’s Kitchen See Sprouter, which I do have. Second is in a jar and third into microgreens.

Considering I want a lot of shoots to eat, I decided to grow them into microgreens using my soil from my garden. I ought to throw out a disclaimer out there to warn you I do not have a green thumb and I do not know what I am doing majority of the time when it comes to plants. 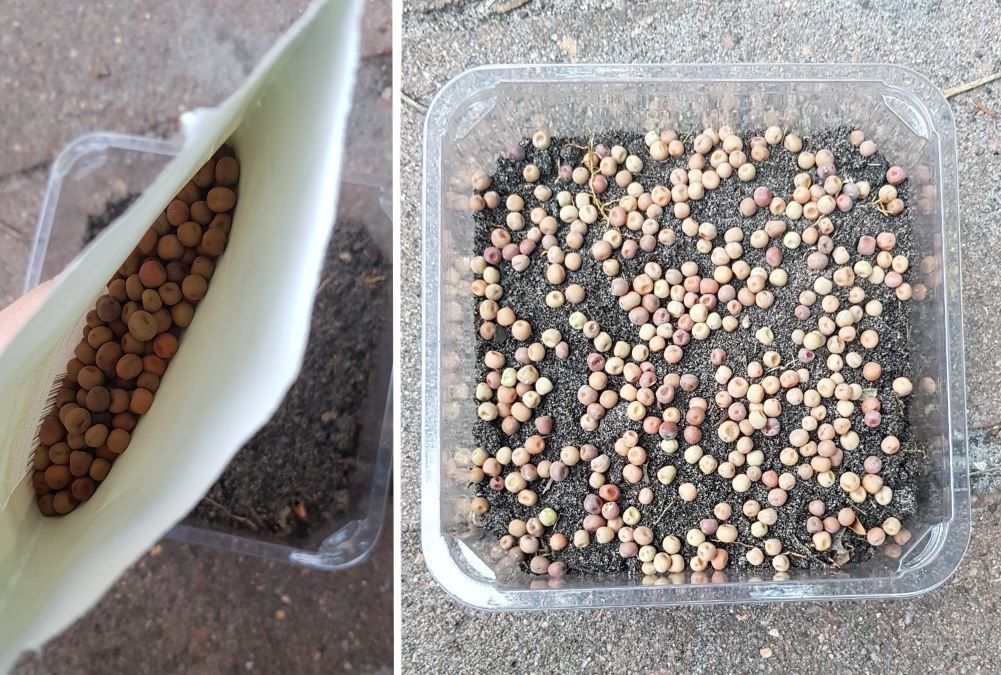 So let’s get cracking. I had kept a plastic tub from mushrooms we had purchased some time ago which seemed to be of a good size and depth. After filling about half of the tub with soil, I sprinkled the seeds on top. The seeds are a lot bigger and rounder than the oat seeds I use to plant for Soju. Whilst sprinkling the seeds, I thought I was overcrowding it but wasn’t sure hahaha.

The decision to use up all the seeds was due to the fact that I need a lot of shoots in order to cook up a dish. I then top it with loose soil. I had topped it a little more than I usually do with the oat grass, probably about 2.5cm deep. My reasoning to that was since the seeds were bigger maybe I ought to cover it a little more.

I then brought it inside and sprayed the top layer with water. I thought it would be a little boring to take a photo of just dirt sprayed with water, so I brought down the oat grass I was growing for some colour.

At that moment I had totally forgotten how much Soju loves oat grass. She was quick to get off her comfy spot on her dad’s chair to see if she could take a bite. So I took a quick photo and swooped up the oat grass before Soju could take a big bite of the grass.

We don’t exactly have a lot of spots in our area to pop the plant. So I placed it near the oat grass which seems to be growing ok. Considering the colder days coming up, I should have really sowed this earlier this year.

So how did I do guys and gals? Did I sow it correctly? Do I need to take some top soil out? Did I put too many seeds in the tub? Should I be spraying water on top once a day or a couple times a day? Eek I hope I don’t kill them before they get a chance to sprout. Let me know if you have any tips for me.

I good "rule of thumb" is to plant you seeds twice the depth of their size.
Make sure you have drainage holes in your tub or you have a chance of losing your seeds to rot.
Hope this helps, let me know if you have more questions :-)

Nice, thanks for the tip @brizhorticulture. Twice the depth of their size, that's easy enough to remember. I'll keep it in mind for next time. Eek I don't have any drainage holes in my tub.....I'll be sure not to water it so much then. Cheers!

I have no tips, only questions for you. What dish do you cook with the sprouts? And is oat grass something that all cats like, or just Soju?

I am planning to make a stir fry with the snow pea shoots with garlic and oyster sauce. I read it is best not to eat them raw as they are slightly poisonous, but they say you can make a salad with it or pop it in a sandwich.

The oat grass is like wheat grass, they are something all cats like. Also humans can eat them too. Since cats like to eat/chew on grass, they tend to vomit afterwards. Whereas oat grass and wheat grass they wont. I only cut off a few blades for Soju per day.

Your planting looks ok but soil is not a good idea if you want to cook and eat your shoots, because you are unlikely to get all the soil particles off when you wash them for cooking. This is going to give a sandy texture to your dish. Always sprout cooking sprouts in a container without soil

🙀 But the instructions said to use soil 😿 I don't want sand in my food.
I had a look online and noticed some grew without soil in a tray and others grew them on top of soil only. I don't feel confident I would succeed without soil because my previously seeds I had grown without soil didn't grow as good. So I decided to go with the later. I had a look and I am not too late to fix it, only about half had started to germinate. It took me a while but I got all the seeds out and washed/drain/soak/rinse over and over to get the soil off. I took out soil from the tub and left about 2cm. The instructions said to put a lid on it to keep it in the dark til it grows and reaches the lid. I didn't have a lid so I used foil to cover it up. Now it looks like a lunch box. lol. I hope this will be ok. Thanks for the heads up @nikv! 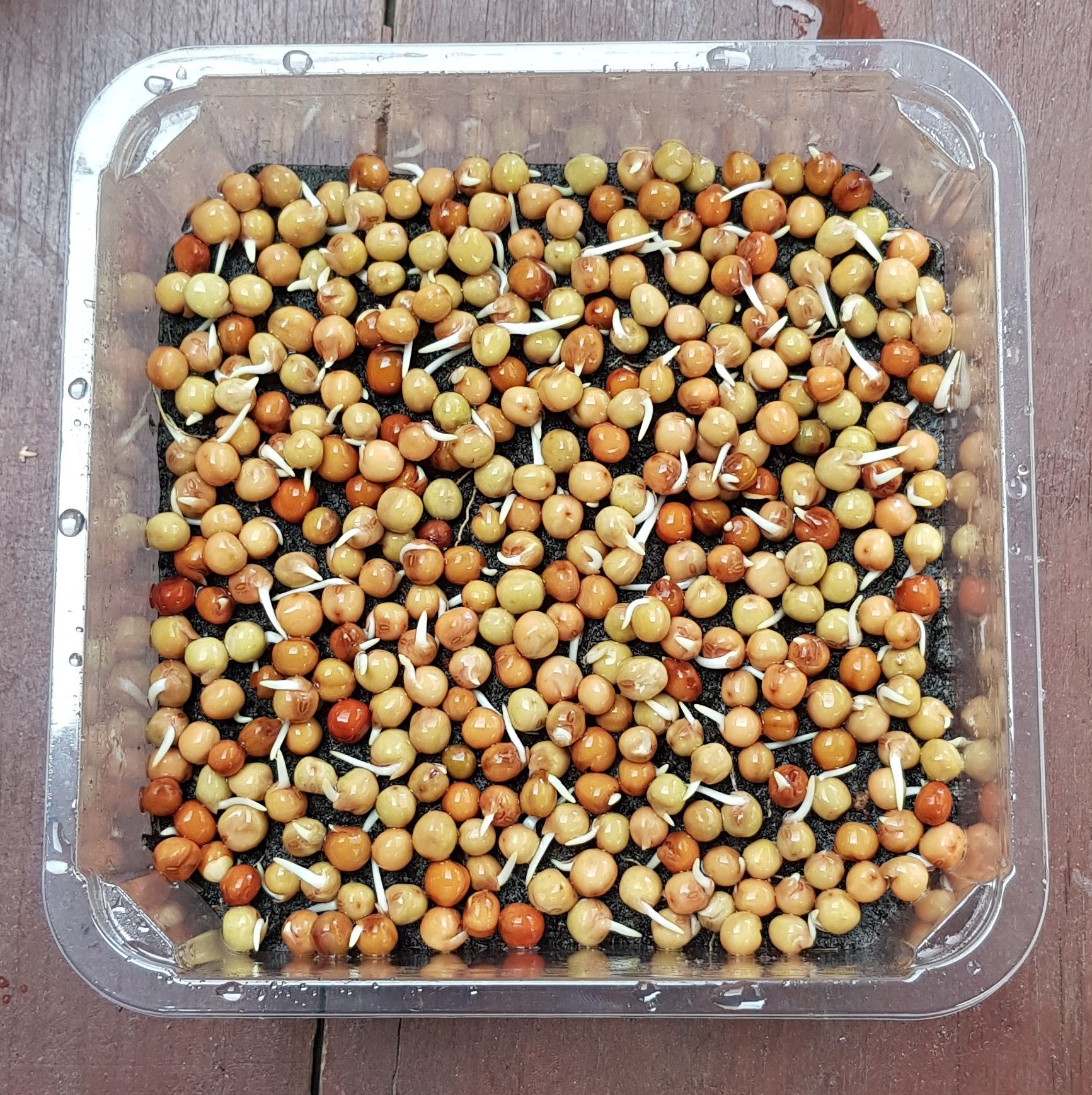 Hopefully that will work better. I really like my homegrown spinach but it drives me crazy when you wash it well, discard the cooking water and still end up with crunchy food

It looks like a great kittie litter for soju, and if she likes oat sprouts there is a good chance she will like bean sprouts to dig up while enjoying a relaxing wee.

OMG you read my mind when I was placing it near the oat grass. I was worried Soju would smell the soil and decide it would be nice to jump up there and dig. But there is no room for her to jump up on the shoe rack and it wouldn't support her . kekekeke

It's very fun I've also planted with my mom, meow!

Soju: Meow! My mum plants them without me though. But I like to sit near them when I want to eat some oat grass that she grows. I wait for her to cut me some. Though sometimes she takes too long so I try to reach for them without jumping up. I made a mess last time I jumped up. Never again.