View this post on Hive: Growing Rice Paddy Herb by the kitchen window

Rice Paddy Herb or Ngò Ôm is a very popular herb in Vietnam and is one of the critical ingredients for Canh Chua Cá the traditional sweet and sour fish soup (which I will share the recipe and some photos in a future post). 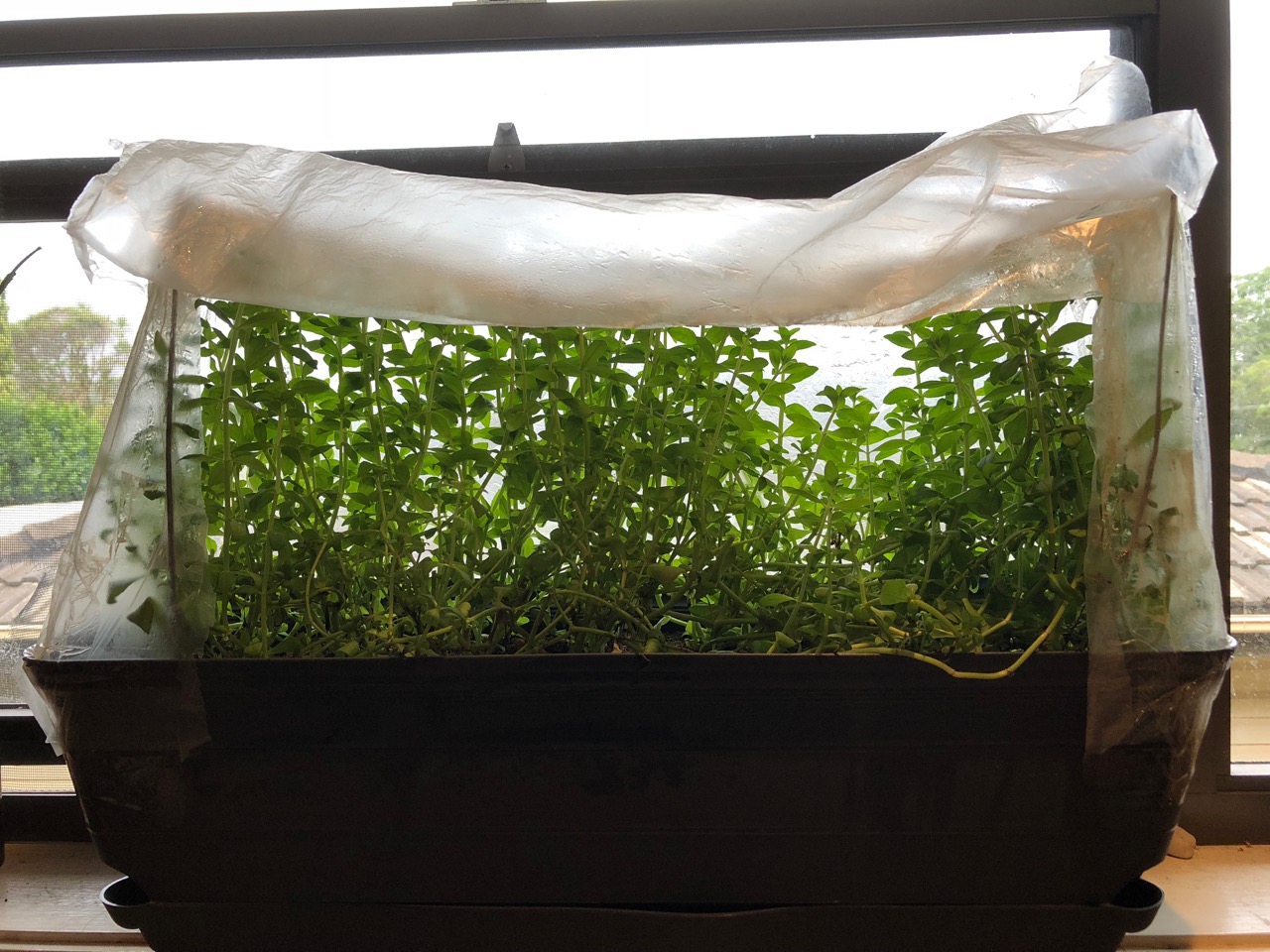 Like most herbs, the Rice Paddy Herb can be propagated from cuttings which makes it easy and fast to start your own little indoor garden. Here are the steps I took to grow my kitchen window Rice Paddy Herb garden.

1. Buy some Rice Paddy Herb from an Asian grocery shop

Living on the Central Coast, NSW, there are no shops that sell the Rice Paddy Herb, so I had to go to Cabramatta 85km away from home... Cabramatta is the place to the largest Vietnamese community in Australia so we are going there regularly to get Vietnamese food and ingredients we can't find near us.

So you need just a little bunch of Rice Paddy Herb that looks fresh and healthy.

2. Put some cuttings in a glass of water

Usually, we would cut the tip of the herb and leave 4 - 6cm of the bottom for propagation, but my wife was away (she's the cook) so I just used the whole thing. In this picture, the herb looks wilted because they have traveled a long way, but they should recover very quickly once added to the water. 3. Planting in a pot

After about two weeks, you should see little roots forming on the cuttings. They are ready to be planted in soil. The growing medium I've used here is a cheap potting mix from the garden center mixed with vermicompost (worm compost) and Zeolite to allow better drainage and add trace minerals. 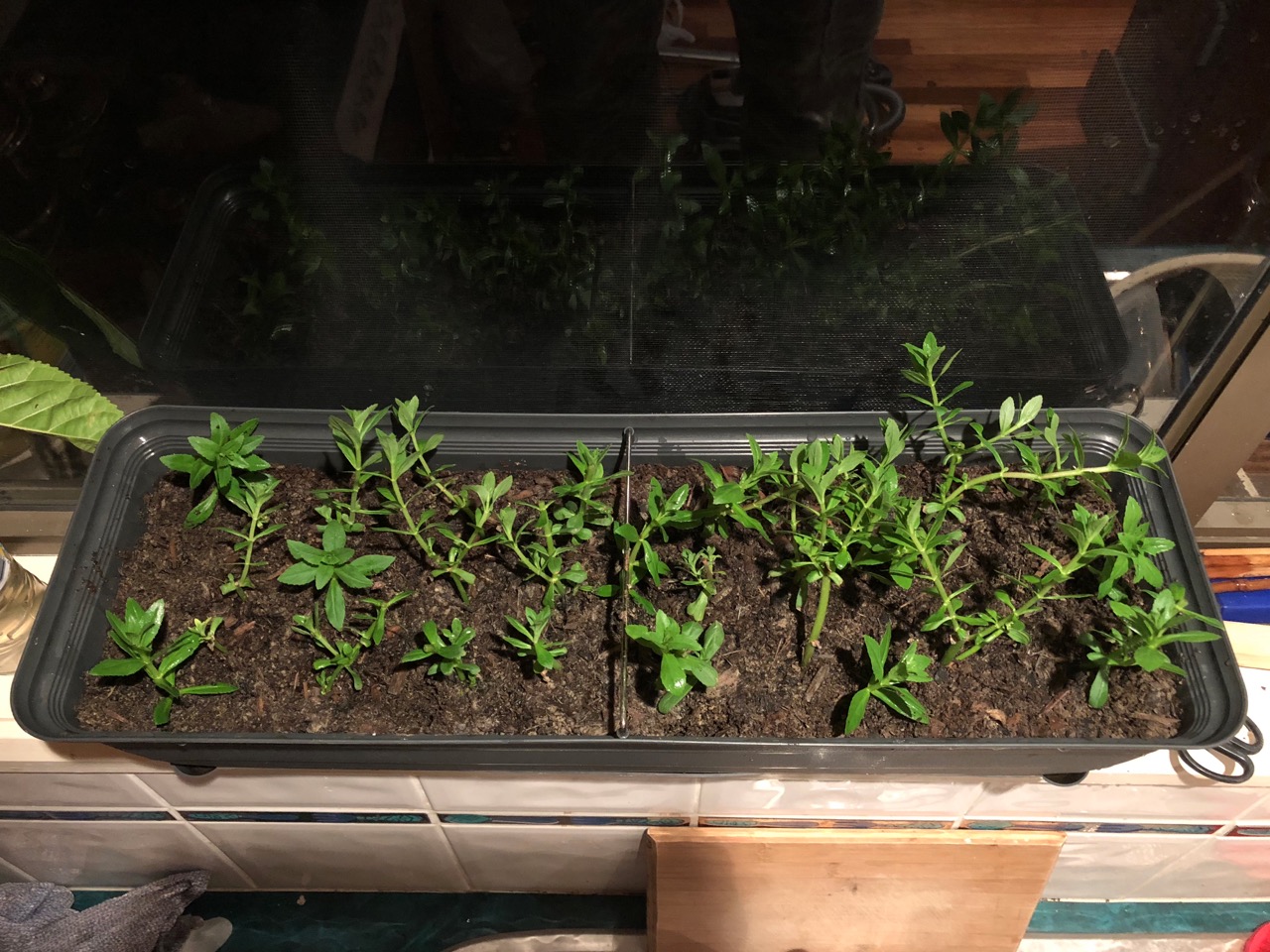 I've chosen self-watering pot (with a water container at the bottom) to make it easier and because the Rice Paddy Herb likes it moist at all time, some people even plan them in a non-draining container with water covering an inch above the soil.

After adding the soil to the pot, I watered the soil thoroughly and added the herb. I used an old chopstick to make little holes into which the cuttings will go and then I'd lightly compact the soil around the cuttings to make sure they are in contact with the soil.

4. Build a small greenhouse to keep moisture and warmth

As mentioned above, the Rice Paddy Herb likes moist environment but it is also important to keep it warm. In order to get a good moisture and temperature control, I needed a greenhouse, but how to build greenhouse indoor by the kitchen window?

I started cutting sections of bamboo branches and stick them into the soil in the pot to make a frame. I then took a large translucent plastic bag (one from the veggies section of a supermarket) and cut it into rectangle sheets which I then taped around the bamboo frame to form my homemade tiny greenhouse. I made sure the last side (facing inside) was only taped on the top so it would act as an access door (see photo further down in the maintenance section). 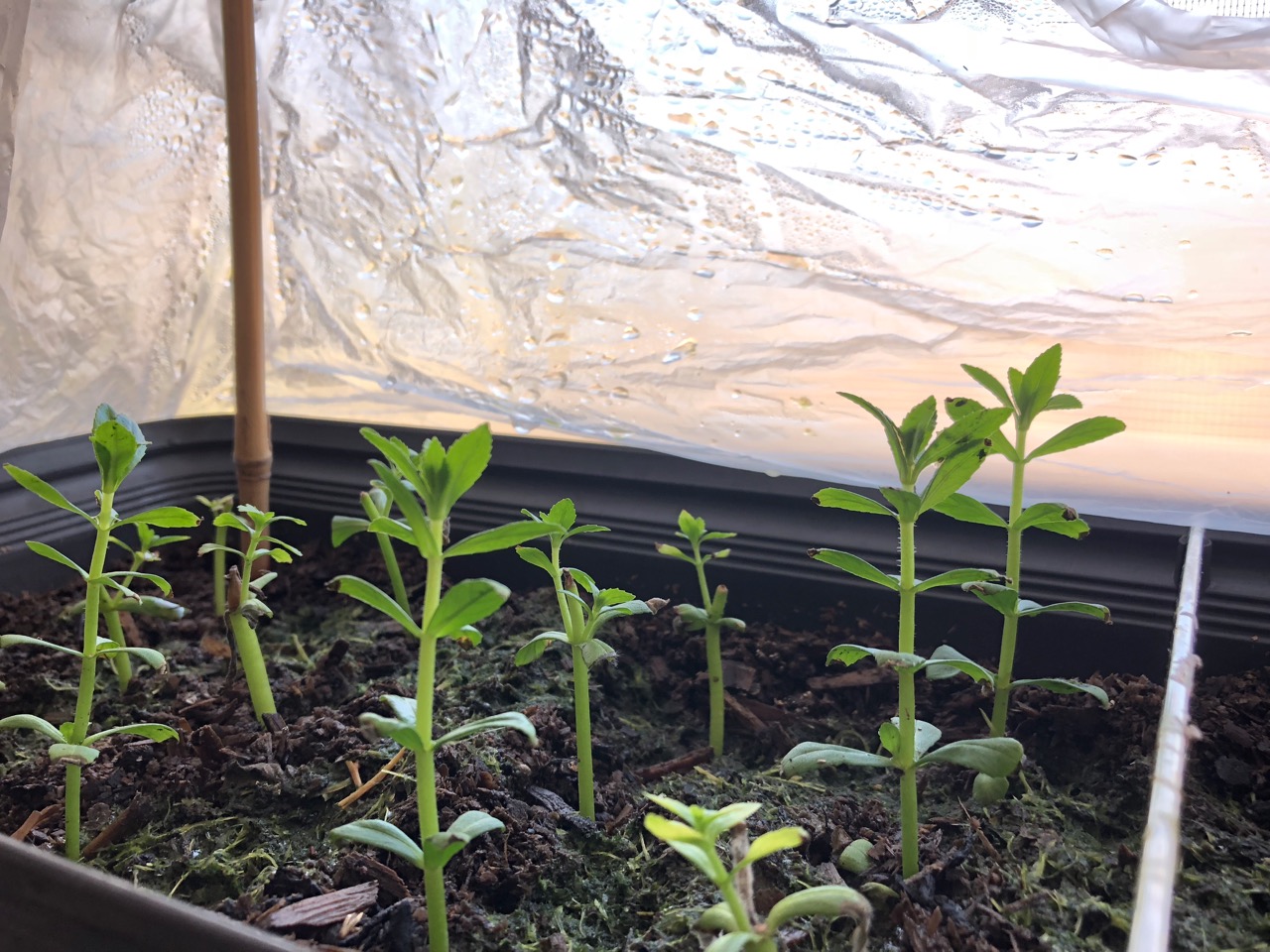 As the Rice Paddy Herb develop, it might outgrow the greenhouse which is the case for me because I built it too small. So I dismantled everything and rebuilt it with cloth hanger wire. 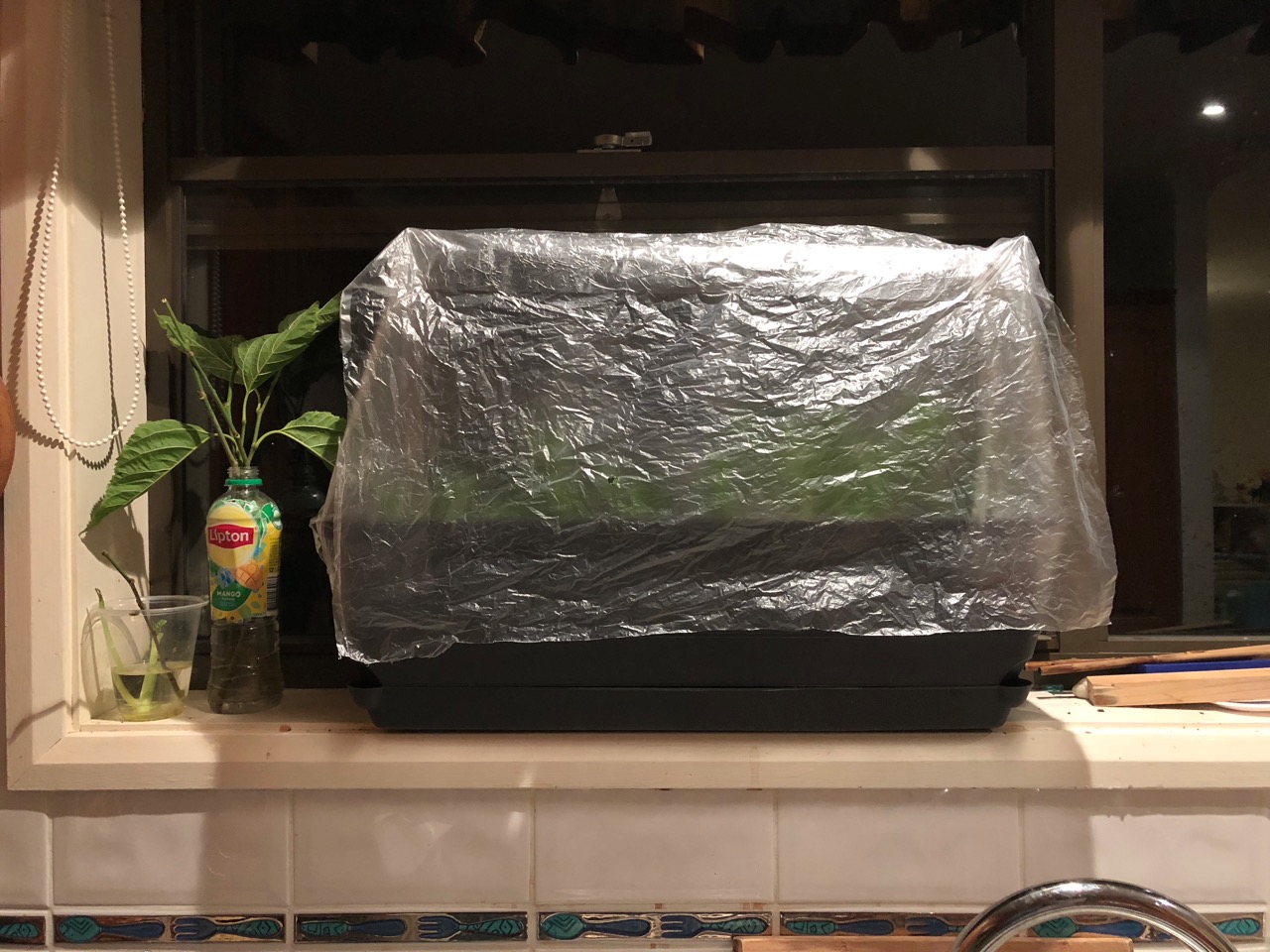 As you might be able to notice in the photo above, the front panel of the homemade greenhouse is only taped on the top side allowing me to lift it up and access the inside for harvest and fertilizing. This little setup works very nicely, the project was started on Sept 30th 2017 and today (Feb 20th 2018) we are still harvesting from the same setup and the herb is thriving. The first photo at the top has been taken today mid-way writing this post, it shows the little jungle that has formed inside the greenhouse.

I hope you will find this article interesting and it will inspire you to grow your own Ngò Ôm.

For how to set up a worm bin for making your own compost and compost tea, check the following posts:

I don't follow for follow, I don't upvote for upvote. If you make quality posts that I like/enjoy then I will upvote and/or follow you
4 years ago in #gardening by quochuy (72)
$72.93
186 votes
Reply 8

I never knew what that herb was called. Thanks. I tried this method once but the herbs just began rotting and never rooted. Perhaps they were sprayed with something, not sure but I'm going to try again!

This herb grows in rice paddies in Asia, so they are definitely not afraid of having roots in water. Maybe wash well before and change water if you see it becomes murky. But you are right, they might have been sprayed with something to prevent people from propagating them, that would not be the first time this happens.

The greenhouse is akin to one I built for my macro-propagated plantain nursery, that stayed in my backyard for most of early last year. If I had the herbs I would consider trying this one out. Yeah, post was informative and well written. And I look forward to the recipe post ;-)

Thanks for the comment. It’s crazy how even a simple greenhouse like this can affect the growth of the plant. In previous years we have managed to grow the rice paddy herb in a simple pot but it didn’t thrive like this.

As for the recipe, I need to catch some fish first so my wife can prepare the dish and I can take some photos of it. Hopefully it will be soon as my favorite fishing season is almost there.

Yeah, the greenhouse is some piece of "technology" as faithful to man as cement+steel. I exaggerated a bit there. I was equally impressed with the state of my nursery in a greenhouse compared to when they stood under a shade in the open atmosphere.

Do you own an aquaculture pond or is it a natural water body?

I meant going fishing by the estuary or ocean as I live near the coast.

@misterakpan I noticed you are a curie curator, is it you I should thank for getting my post noticed?

Oh wow!
Thanks @curie for upvoting this post. This is such an honor to get a post approved by one of your curators (and thanks to whoever that curator is). It is worth the effort put to write this post.