A Flood of Cucumbers

When cucumbers start coming in it can get a little crazy. If you are away for just a few days as I was, the cucumbers will get very large in a hurry. You can see some oversized cucumbers here in my latest harvest from two plants. Cucumbers grow as a vine and conventional plants require either a good deal of space or a trellis to climb. I grow a bush variety that requires less space but still produces more than enough cucumbers. They won’t grow much larger than this. 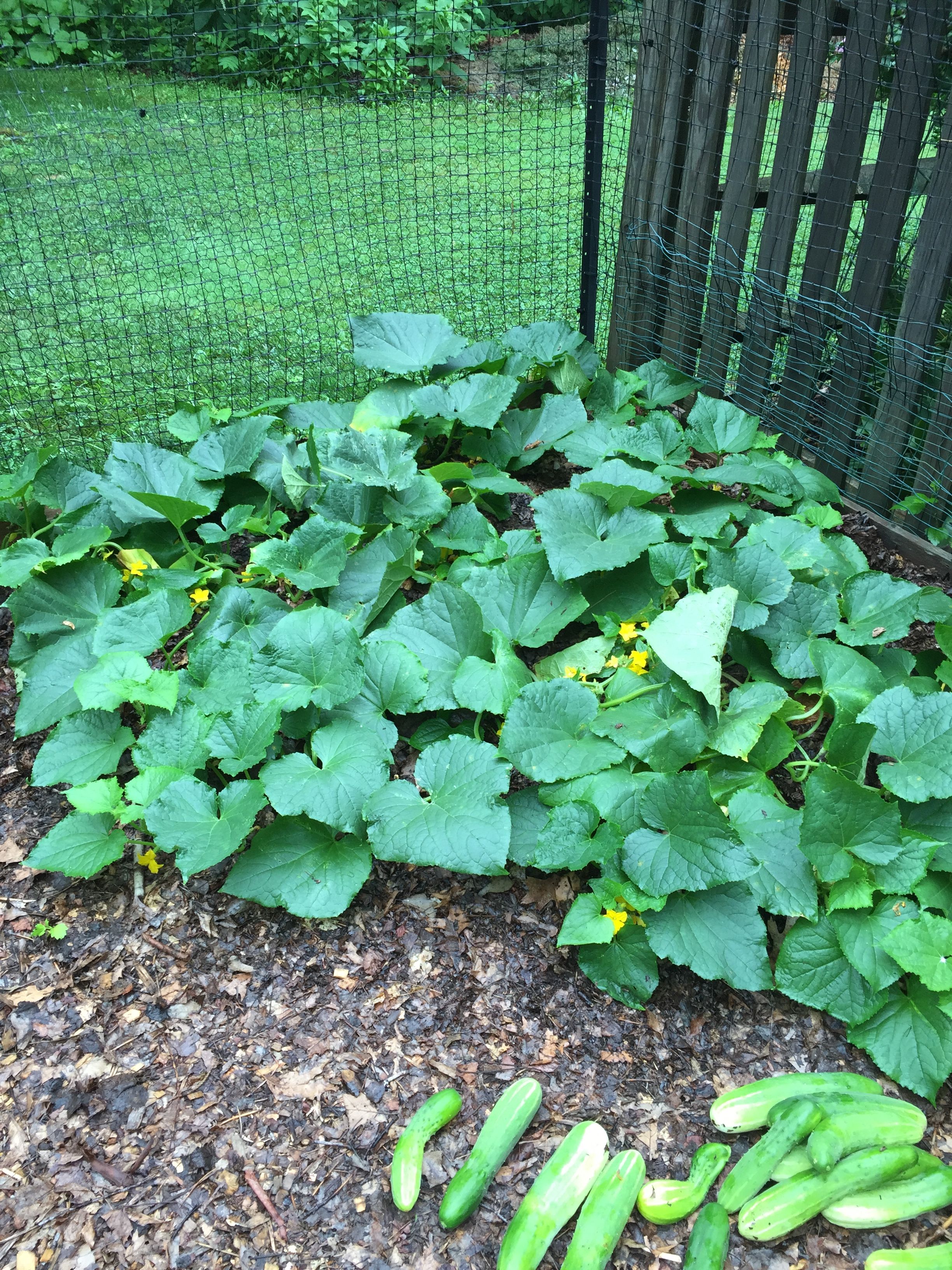 Cucumbers require a lot of water in order to produce well and should be watered daily if it’s not raining. I do not use any fertilizer for them but work in organic matter before planting. I grow them in the corner of my garden and raise the bed up but do not put them in one of my larger boxes. I find it works better to just put them out of the way in a corner and let them do their thing.

I also think it works better for me to plant the seeds directly into the ground rather than attempting to start plants inside. I lost the plants that I started inside this year from root rot which set me back a couple weeks. This has happened to me prior years also. My strategy next year will be to plant some seeds every week starting in late April until I know the threat of frost is over and then keep the two largest healthiest plants. The last frost date for me is around May 15th.

This year I decided to start another plant in late June in an attempt to extend my harvest time into the fall. I did build a small box for this plant and planted it several feet away from my primary bed. The box is not very big and the plant may become somewhat root bound but my objective is not to produce an extraordinary amount of cucumbers from this plant but rather to merely extend my season into September. If this plant doesn’t do well I’ll know the box needs to be bigger.

So my best word of advice with cucumbers is don’t plant too many unless you are planning on selling them or making pickles. Thanks for reading and good luck with your cucs.

Nice harvest from 2 plants though! I just love seeing people harvesting their crops, it is just a great feeling!
I had a visit yesterday at my bro in law's greenhouse, wow i was so impressed! Do check it if you have a time, i'm sure you'll like it too!
Cheers
@progressivchef

Cucumbers are great for you, they keep you alkaline and are full of easy water...

I have to start cucumbers and many other seeds in my greenhouse due to our soil temperatures. Never had problems with root rot. I do use a sterile seed starting mix. If I plant in the ground the seeds mostly will not germinate and eventually rot. In Wisconsin where I grew up we always planted directly in the ground. Even though zones are similar to here in Idaho the nights are warmer in Wisconsin, thus the soil is warmer.

I have been eating and giving away cucumbers from what I grow in containers. Also my dogs love them too. In fact my Labrador Retriever just helps herself. :o) Love your post

Thanks. Funny your dog eats cucumbers. I wish mine did since I have so many.

You are right about it getting a little crazy! I think we planted more than we can handle haha. We will have to can some pickles for the first time, which will be fun.

Your cucumbers are doing really well! My mum has a self pollinating cucumber vine which has produced some lovely fruits this year.

Best time of gardening is the harvest. I currently can't keep up with the courgettes.

Yes it almost gets stressful though. I freeze tomatoes for sauce but don't do much canning. I give a lot away and eat as much as possible but sometimes you can't figure out what to do with it all.

Awesome harvest. Last season I had to hand pollinate our cucumbers because the insects weren't doing their job. I kept missing the female flowers though so we didn't end up getting many. Very jealous you got so many from 2 plants. Well done. Thanks for sharing.

I attract a lot of pollinators to my garden since I have such a large variety of plants with something always flowering. My neighbors als have huge rose of sharon bushes directly next to my garden which attract tons of bees. They are very important in the garden. Thanks for commenting.

Yes, very important. I also do what I can to attract pollinators. There is something weird happening in this region, not just my garden, where most people have to hand pollinate zucchinis, pumpkins, watermelon, even passionfruit. There are lots of bees around as well as other bugs, my garden is swarming with things most of the time, yet for some reason, things aren't pollinating. It's the middle of winter here and birds have started nesting and fruit trees have started blossoming. Everything is very confused. It's a bizarre phenomenon that I haven't heard a good explanation for as yet.

That's scary. I hate to hear things like that. Hopefully things will correct back to normal but who knows with what's going on these days.