This is another review and my experience of playing classic video games. I will keep updating this kind of article every day. Make sure to follow me @zulman

Hallo Steemians! How are all doing today?
Back again with me @zulman with another review of old games that was release for MS-DOS platform and before the year of 2000. This game in particular that I am going to review was released in 1993.
The reason that I am reviewing these all old game is that I want to experience what the game is like. I do not play a lot of game when I was a kids. So, with this review, I want to experience those old games now.

As usual, at the end of the article, I will give you all the information about how to play the video game that I am reviewing. Also, i will tell you how to install the game on your current PC or Mac or or if you do not wish the difficulties of installing the game, I will also give you information where you can play the game online. There are many website that provide so many old MS-DOS game. 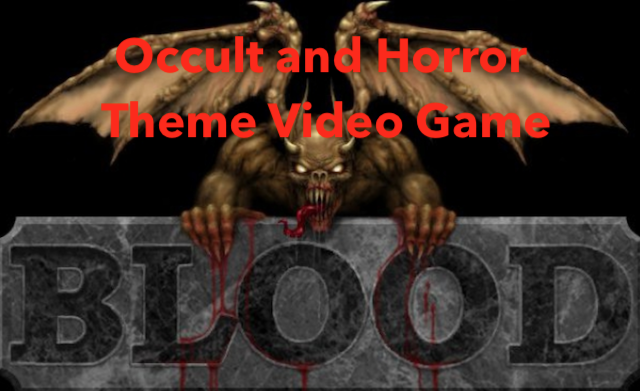 Alright, let's begin the review of the game.

In term of the story line, this video game tell a story about an undead gunslinger in early 20th named Caleb. Caleb is seeking revenge against the dark god named Tchernobog. This video game feature a lot of occult and horror theme. In this video game, there are also a large amount of graphic violence included. Yes, this video game was belong to the violence side. Beside that, this video game also feature lot of large weapons that are from standard weapons to bizarre class weapons. The player also need to fight numerous of enemies and bosses.

This video game has become a franchise. There were sequel of this game entitled Blood II: The Chosen. This sequel was released on October 31, 1998. The franchise of this game itself was continued with two official expansion packs. These expansion pack named Plasma Pak, that was developed by Monolith and another one entitled Cryptic Passage, that was developed by Sunstorm Interactive. Later, the video game was released on GOG.com in April 22, 2010 along with the two expansion pack.

Blood is one of the earliest FPS games to feature alternate or secondary attack modes for its weapons; most weapons in Blood have two different modes, whereas weapons in previous FPS games usually had only a single type of attack. Blood also has "super secret" areas which are very hard to find or reach and contain large rewards for discovering them. Here is the summary of the game development:

This video game support for single-player and multi-player. In single-player mode, the player of the game will play the role as undead gunslinger named Caleb. Caleb has quest in order to take revenge against his former master. In order to finished the quest, the player need to navigate through a lot of level in each episodes. The objective is to find the exit until the boss of the level appear and the player must defeat the bosses and large number of enemies.

The episode in this video game are create in order following the storyline of the game. Despite this order, the game also can be played in any order if the player want. The episodes of the game are as listed below:

Blood video game's gameplay is very similar to another classic FPS game such as DOOM. In the game, the player need to activate switches or find keys in order to go to the next levels. However, in some of the maps, there are more than one keys that the player need to find. The feature in this game that available to help the player to navigate the maps are teleporters. There are also features that will prevent the player navigate the maps successfully such as crushing blocks, explosive barrels, lava pits, jumping puzzles and combination lock doors.

Beside the feature above, there are also a lot of items available in the game. These items such as Weapons, artifacts, and also bonuses items that appear. For Firearms, this video game inlcudes a flare gun, sawed-off shotgun, and Tommy gun. There were also explosive weapons such as dynamite and napalm launcher. A shock rifle also available and there are also some of magic artifacts including Voodoo doll and aerosol canister that can be used as flamethrower. The video game also features a power-up. This power-ups known as "Guns Akimbo", with this power-ups, the player will be able to wield dual weapons temporarily.

In Blood, like other FPS video game, it also feature multiplayer modes. This multi-player mode will be played as the classic deathmatch game. In blood, this match was known as "Bloodbath", and as cooperative play. Bloodbath can be played on a special map that was particularly design for it. While Cooperative gameplay is following the lines of the single player campaign. This mode is allowing several players to work together in the levels from each episodes.

Check this picture below to see how the game look like. My opinion about Blood video games.

Alright, before we end the review, Let's see how you can play this video game in your current PC or Mac

The game that you download will come in an archive, you need to extract it and then run it with DOSBox. You can find how to run the game inside DOSBox below.

>> Instruction to setup your computer to play Blood video game

If you do not want to waste time or just simple do not like the difficulties of step that you need to do install the game to your computer, do not worry, you will still able to play this game online without installing it. Check out the link below to the website where you can play this game online.

Note: The sequel of the video game entitled Blood II: The Chosen + The expansion also available on Steam. Click here to check out the game on Steam.

>> Video on how to install DOSBox on your PC or Mac

Alright, that is all. if you want to try the game, go ahead, install it or play it online and have fun

Thank you for visiting my blog...

I played this game so much throughout my childhood and even as an adult I continued to do so. One of my favorite pc games back then!

Follow me and my Gaming News Blog here on Steemit, @Viridiumgaming if you want to support us! Voted and followed! ♥

Thanks for visiting my blog @tsukuyomi. Glad you like the review.