This is a review and my experience of playing classic games. I will keep updating this kind of article every day. Make sure to follow me @zulman

Hallo Steemians! How are all doing today?
Back again with me @zulman with another review of old games that was released for arcade platform and the game was released 1981
The reason that I am reviewing these all old game is that I want to experience what the game is like. I do not play a lot of game when I was a kid. So, with this review, I want to experience those old games now.

As usual, at the end of the article, I will give you all the information about how to play the video game that I am reviewing. Also, I will tell you how to install the game on your current PC or Mac or if you do not wish the difficulties of installing the game, I will also give you information where you can play the game online. There are many website that provide so many classic game. Alright, let's begin the review of the game.

This video game was a success, the game was well received in the market with more that 15 thousands copied was sold. In August 1981, Scramble become the second best-selling video game under Stern's publisher. It only lost to Berzerk video game which sit in the first place. Scramble also have the sequel entitled super cobra. The sequel is also become a very success video game. Scramble video game was at the time does not have any support for any major contemporary consoles or computers. However, there were a version that was developed and ported for the Tomy Tutor and Vectrex. There were also several unauthorized clones of this game for VIC-20 and Commodore 64. These clones also go by the name "Scramble"

After the release of Scramble in 1981 for North America market by Stern. The company (Stern) became the plaintiff in a legal case setting precedently. There is a company called Omni claim that they also had obtain to the license rights of the Scramble video game. They even go further by creating and produce copycat of an arcade machine for this game. However, the case was won by Stern Company.
Scramble can be played by one or two players. For two player mode, the game can be played in an alternating turn Scenario. 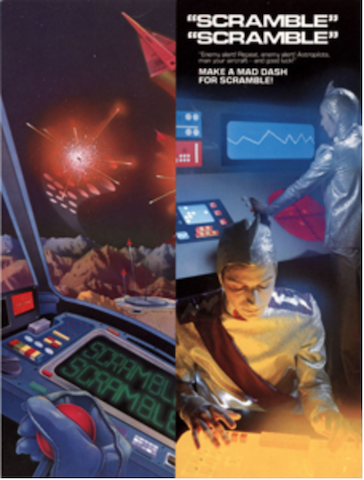 Here is the summary of the game development below:

In term of the gameplay, this video game have a total of 6 parts. The objective of the game by going left, right, up, and down is to navigate your space ship fighter and eliminate all the enemies. There also will be a major battle at the end of each level. This battle is for the player to annihilate the base of the enemies in order to proceed to the next level. The player need to shoot the enemies while navigating the space ship.The player also need to take attention for fuel levels. If fuel is running out, it will cause the life. To add more fuel store into the player reserver fuel tank, the player can destroy by dropping bombs onto a gas tanker located in the terrain. If you can stay alive and flaying the ship, it will earn you 100 points, destroying gas tanker will earn 150 points, and finally, you can earn 100 points by flying a saucer. See list below for the summary of the scoring:

The enemies of the ground has to be destroyed with the bomb, while flying enemies can be shot with a gun. Please make sure the timing in order to hit the enemies. Make sure to drop some bombs as well to destroy the tank fuel that located on the ground, it will add your tank fuel and make sure it is enough to go or proceed to next level.

Check this picture below to see how the game look like.

These screenshots is taken from online And this one is taken from android gameplay

My opinion about Scramble video games.

This video game is one of the most fun playing video game i have ever tried. The gameplay is very fun and it is really could bring back those sweet time in the old days. Playing this kind of game is really can make you giggles sometime when you unintentionally remember the time that you have in old days. This game is also a very good game is you want to just spend your time. It is recommended.

If you want to see how the game is look like, check out these video below

Alright, before we end the review, Let's see how you can play this video game

Note: Check out this link on how to install SDLMAME Click here

>> Play Scramble on your Android Device

For those of you who does not want to make life harder, we have a good news, this game is also available online. There are a lot of website that provide this video game online. There is no need to download or install anything. Just click the link and you are ready to play. Check the link below.

Alright, that is all. if you want to try the game, go ahead, install it or play it online and have fun

Thank you for coming to this blog...

I think this game has been destroyed, somehow you rediscover the fossil that has been buried. Pretty post my bro. and .. do not forget Upvote n resteem for me..
have nice day...

Haha, it is indeed a very old game, but you can find these game now easily.
Thanks for stopping by @hardijr

🤣 Most of those wbo knows the game are now old people.

This game is very popular in its era, even now there are still some who play it.
Nice article @zulman

That is right. I personaly still play some old game to spend my leisure.
Thanks for visitting my blog @achmadkurniawan

the classic game of the space shooter. I love the game ... thanks

Thanks for visiting my blog @moezak