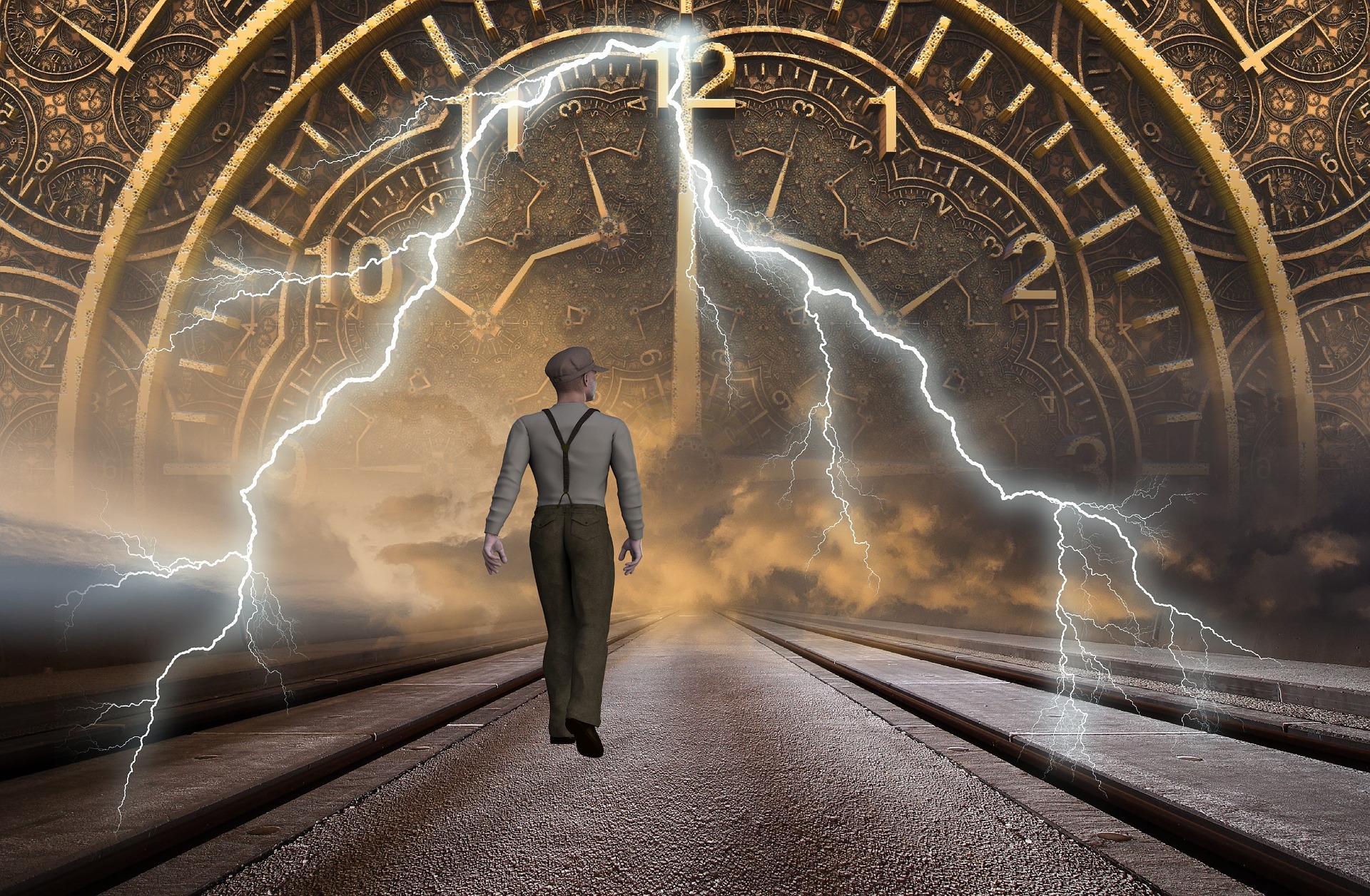 Welcome to the fourth installment of my game review series, where I strive to introduce people to lesser known board and card games.
Without further ado, allow me to introduce... Chronology is a fun game where players compete to see who knows their historical timelines best.

As implied above, this is a historical trivia game with an emphasis on the year that various events occurred.

While this may be a lesser known game, it is a lot of fun to play, and highly educational as well!

To be honest, I would have never even heard of this game if I hadn't stumbled across it at the local grocery store. They happened to have a display set up, filled with random toys and games.

I needed to get a gift for my brother for his birthday (maybe it was Christmas?) and thought this game looked interesting. After looking it over for a bit, I decided to nab a copy for our own game collection. It has proven itself to be well worth the cost.

I hope that by the end of this review, you all will feel the same way!

After opening Chronology, one will find a smaller box, containing 429 double-sided game cards, and a rule booklet, as seen below. 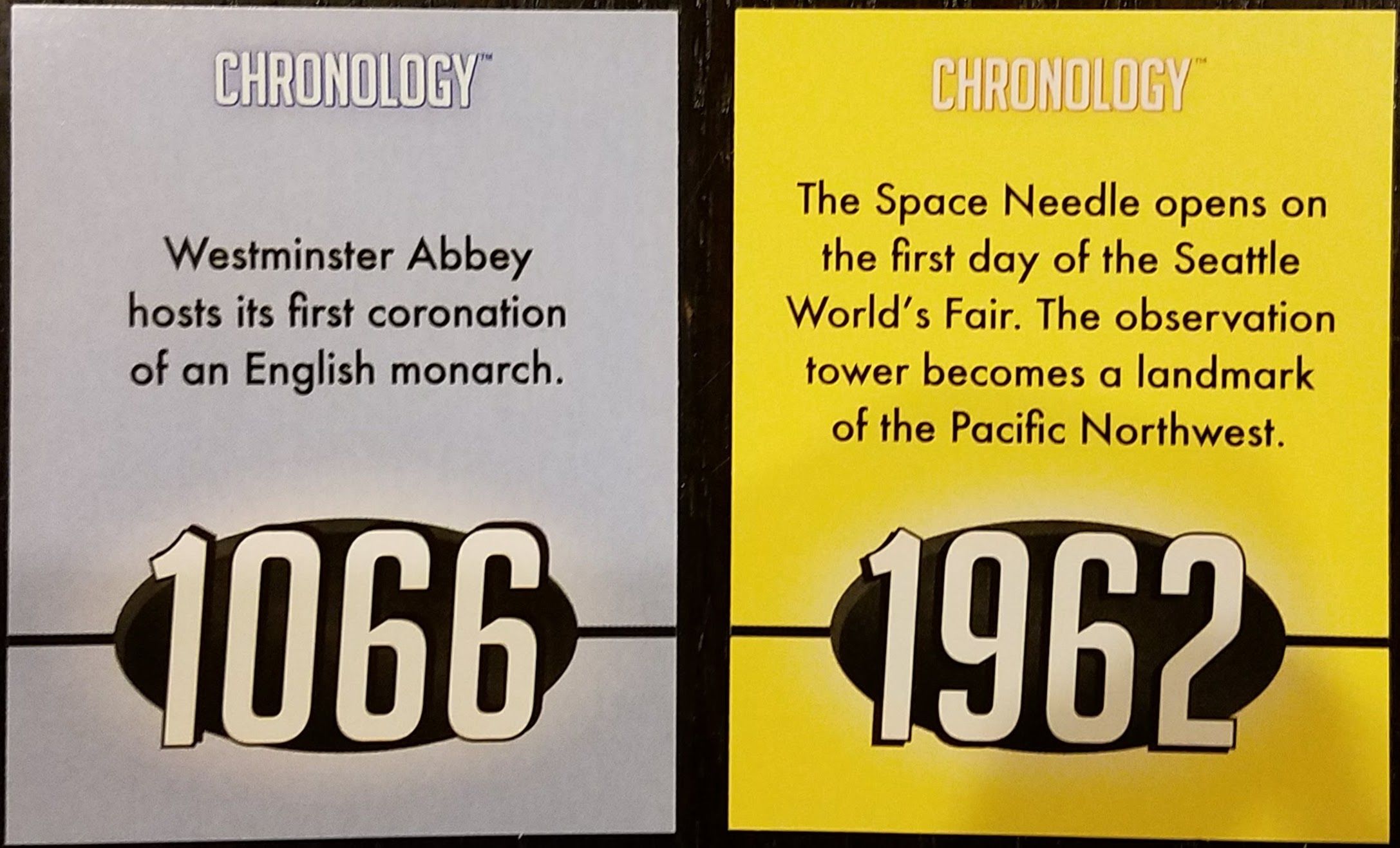 Concerning the game cards themselves, there is a blue side and a yellow side, as can be seen in the photo to the right.

There is no difference between the blue or yellow sides in terms of rules or difficulty, they just represent 2 different sets of historical events in order to give more options while playing and extend the life of the game (the game begins to lose its appeal once people memorize the cards...). You can choose to either play the blue side or the yellow side, just stay consistent once you choose one.

The game cards will all have a historical event on them, as well as the year on which that event occurred.

In this game, each player assembles a timeline consisting of various historical events. The objective is to be the first player to create a timeline containing 10 events in the correct chronological order.

Every player will then draw one card from the deck (remember to pick the blue or yellow side and stick with it!), read the event aloud along with the year during which it occurred, and then place it face up in front of him or her.

This officially begins each player's timeline.

After this, you must choose someone to go first. The game suggests it to be the oldest individual there, however, we tend to forgo this rule when playing with my in-laws, as my mother-in-law is slightly older than my father-in-law and does not appreciate being reminded of it...

At any rate, whoever goes first must draw a card, making sure no one can see the date. They then read the historical event to the person on their left (this game moves clockwise).

That player must then choose where the event occurred in their timeline. Take the picture on the right for example.

After guessing correctly, the card is added to the timeline in the correct position, as shown above.

In order to add this card to the timeline, the player would have had to guess this correctly.

Please see another example on the right.

This player has 3 cards in their timeline, meaning that they have to be even more precise when guessing the year of the next event.

If the player manage to guess successfully, then he or she will be able to add the new event to their timeline as seen below.

However, if a player guesses incorrectly as to where an event occurred on their timeline, then the next player to the left will have a chance to try and guess where it fits on his or her own timeline.

If that player then guesses incorrectly, the play will proceed clockwise until either someone successfully fits it into their timeline, or it comes full circle back to the reader.

If no one manages to guess it correctly before play returns to the reader, then the reader will announce the date and discard the card. Play will then proceed as before, with the next person drawing a new event card and reading it.

As stated in the objective, the game continues in this fashion until someone manages to accumulate 10 cards in their timeline. Once someone achieves this, that player is the winner and the game is over.

All that being said, there IS one interesting/frustrating rule that should be mentioned.

There will be times where you come across an event that occurred in the same year as another event in your timeline.

When this occurs, the player must guess the location in their timeline either directly before or after the year it matches. Either of these will be considered correct, and they will successfully earn the card. Examples can be seen below:

This game is actually very fun, especially if you enjoy history and random trivia. It is easy to learn, compact, and each game is relatively quick, making it a great choice to take places.

If you are fortunate enough to get a very old date or a very recent date at the beginning, you will likely have a large advantage early on. It is much easier to guess if something came before or after the year 1000 than it is the year 1700.

The game gets significantly more difficult the closer you get to the end. What might have originally been a 600 year gap, may turn into several different 20 year gaps as you add more cards, forcing you to be much more precise.

Getting an event with the same year as one you already have can be highly beneficial as it gives you a higher chance to guess correctly (you can guess before or after that date and still be correct). However, it can be incredibly frustrating to see your opponents get one of these, especially when they have no idea when it occurred but get it right anyway due to the same year rule.

While the game is fun and educational, unfortunately it has a somewhat limited lifespan. If you play it too much, you begin to memorize the various events and when they occurred. Even if you can't remember the exact year, you tend to retain an approximate idea of when it was. In my opinion, this is the single largest drawback to this game, and the main reason it is not receiving a much higher score.

Releasing expansion packs could temporarily alleviate the above problem. Unfortunately, I do not believe they have produced any, nor do I know if they ever intend to do so.

Please note that there are a number of games that go by the same, or at least a similar name. This one is published by Buffalo Games.

Even though this game is fun, especially to those who enjoy history, I have to take into account the obvious downside of the limited lifespan. Unfortunately, this is an inherent flaw in all trivia games. That being said, I give CHRONOLOGY a 7/10. Without taking this inherent flaw into consideration, I would rate it at an 8 for an average individual. For myself, or others who enjoy historical trivia, I would actually rate it even higher, at an 8.5.

If you liked this review, or if you didn't like it, please consider giving me some feedback below! Also, if you have any recommendations or criticisms on what I can do to make these reviews better in the future, or suggestions for games you would like to see reviewed, please let me know in the comments. Thanks!

This is awesome and right up my ally! I am starting to love in person games and love history. Will try this out!