Wanna witness the wedding of Miss. Gaming and Mr.Crypto! Then read on!!!

Do you like playing games? Do you love crypto world? Then this article is for you! 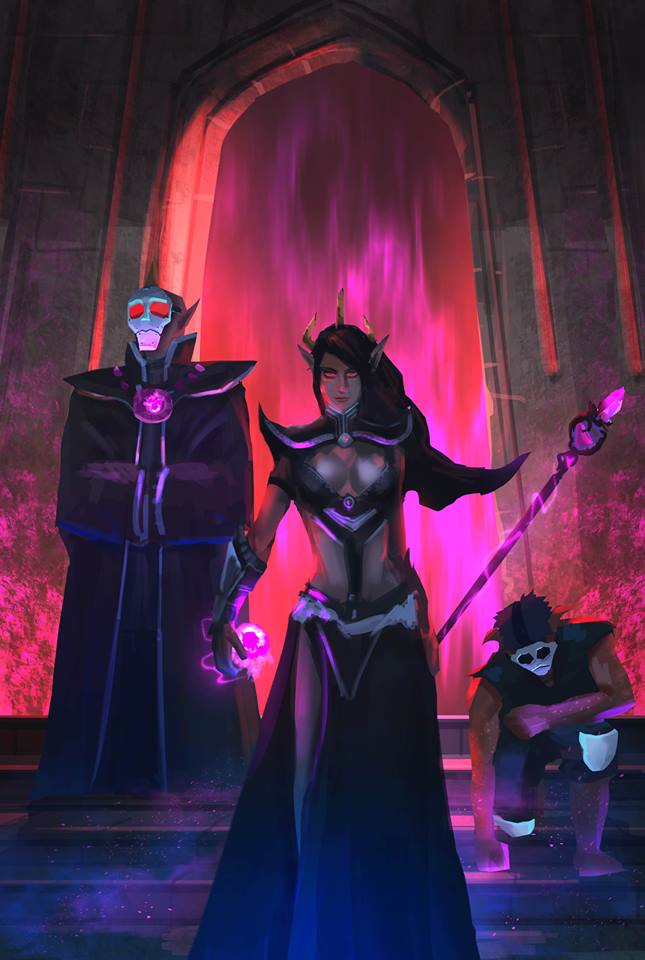 Today I am talking about a soon to be launched game called Hash Rush. It is in closed Alpha stage right now. Hashrush is a multiplayer online strategy game where you will build and upgrade various buildings, explore and conquer new territories (not of other players!), save your ass from the monsters, participate in various events, trade and collect rare items and most importantly......Earn crypto currencies for doing all these things. Yes, you heard it right buddy; earn those valuable crypto-currencies for playing a beautiful, regularly updated game with various factions.

Basically the game is built on Unity and will run on PC. Later, when the game has been successfully launched on PC, then the team will also work on smartphone and tablet versions of the game. First a bit about the game story:

Hash Rush is set in the fictional Hermeian solar system where crystal mining is the main job of all its residents. There are 3 different factions to choose from, which are Ernacks (common citizens), Space Pirates (scavengers) and Higher Elves (magicians). All factions have their own look, playing style and story line, and are tasked with managing their colony on a randomly-generated planet. Players may or may not get an opportunity to choose a faction of their choice, in order to balance the population and strength of all the factions. Players from  the same faction can benefit by linking their colonies, and also compete together in regular challenges against the other two factions. Lone Wolves can participate in solo challenges and missions.

So how does the game pay to the players?

In the past there have been some games (pipstycoon, coinbrawl, bitcoinaliens, neverdie etc.), which tried to bring together gaming and crypto world together, but they haven't been very successful. One because they really didn't have any revenue source expect ads and fees and secondly they were boring! All of these games were basically without any graphics and just about clicking various hyperlinked text options. Some of these had graphics but of low quality.

But HashRush changes that. With Unity game engine, the game compares to any modern day normal game. Maybe even better. In fact, HashRush team has members from famous games like "The Witcher" and "EVE: Valkyrie"!!! So yes, it is not just a crypto game, it is a full fledged game in itself.

How to play this game?

Since the game is still in closed Alpha right now, so it will take a while for the game to officially launch. Free players would have to wait till then. But those who want to participate early in game and with bonuses and RC tokens; to get an early and powerful start can participate in the upcoming ICO to receive their RC tokens. Open Alpha will most probably be available in December 2017, for those who participated in pre-ICO and will participate in first 3 days of the ICO.

The ICO will start from 20:00 UTC on September 20, 2017 to 20:00 UTC on October 20, 2017 unless a cap of 64,050,000 RC tokens sold is reached earlier. One needs to have minimum of 0.1 ETH or equivalent amount of BTC, ETC, QTUM. But no matter which currency you chose to buy RC Tokens during the ICO, you will get your tokens in an Ethereum Wallet like myetherwallet or official Ethereum Wallet. So you will need to have an ETH wallet. And please don't use coinbase or any exchange ETH address. You won't be able to receive your tokens there. The token conversion rate is 1 ETH = 1000 RC Tokens.

The total number of tokens distributed will be capped at 70,000,000 and out of that,  64,050,000 RC tokens will be distributed during Pre-ICO (already done) and ICO. If some tokens are still left out after the ICO, then they will be distributed to the dev team to continue working on the game. 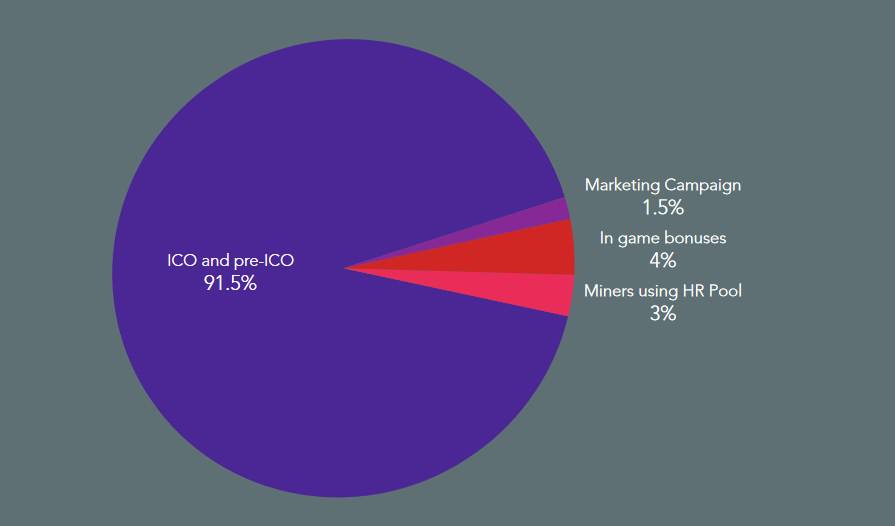 There are various bonuses available to the ICO participants as follows:

In addition to these, there will be several in game bonuses and items available to all ICO participants. Why I am participating in this ICO? 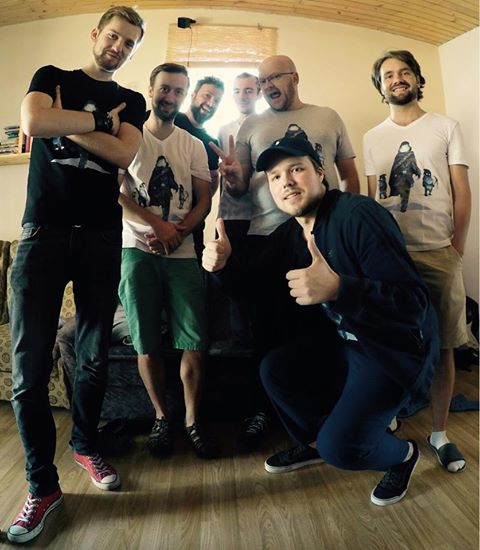 Hashrush Founders along with the dev team 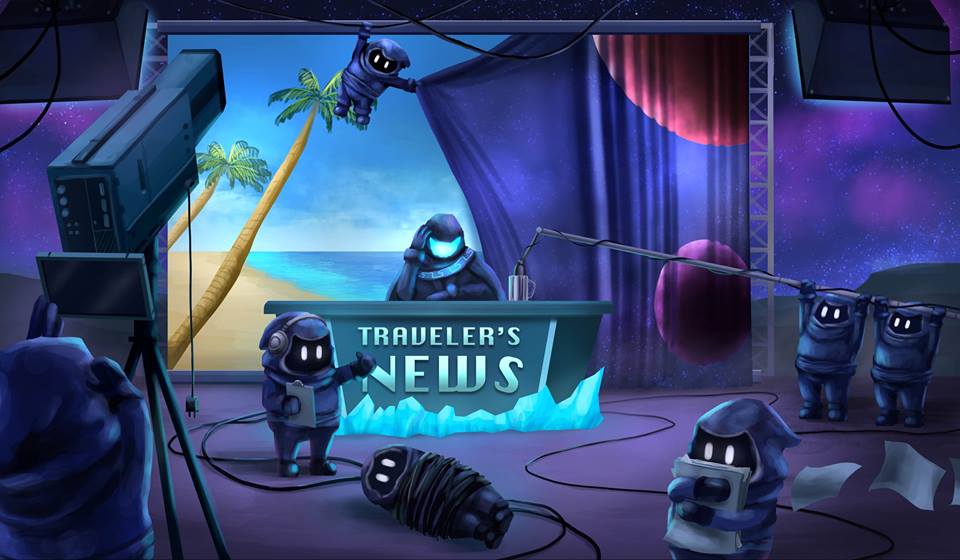 Answer these questions in the comments section and receive free POCKET tokens from me.

Note: I have written about Hashrush as a common crypto enthusiast and not an ICO expert or professional reviewer.

Page dividers and above art by @aleister

Projects that I support: 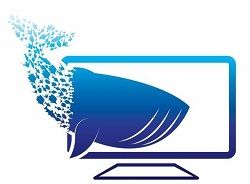 Witnesses that I support:

Please use your 30 witness votes to support the witnesses that are helping run the entire Steemit platform. You can vote your desired witness here. You can use the site, to help decide which witness to support. The green ones with less blocks missed are better options to vote for witnesses. Alternatively, you can hand over your witness votes to a proxy like @teamsteem who can vote the witness on your behalf. Proxy option is available at the bottom of the witness vote page.

I think this is a great concept and I would love to see it succeed. I would probably be willing to invest .1 eth in the ICO. I don't know if I would personally invest any more than that but I don't have a lot of crypto on hand at the moment.

Yes, the concept is indeed very good. I will also be investing around 0.1 ETH only during the first 3 days, so that I can play the game from December itself and expand my colony. But if you don't have this amount, then also it's OK. You would be loaned some RC tokens when the game officially launches and then you can play!

If you don't participate in the ICO when will you be able to play the game?

I love the concept and signed up for the newsletter and follow it on FB.

Cant wait to see how it all comes together.

This game is the first of its kind, It will be well received . watching the count down too. Ill totally be investing in this.

pocketsend:[email protected],
Yes, let's hope it finally acts as a good game which bridges the gap between crypto and gaming world.

Thanks a lot for this excellent article about Hash Rush, siddartha!

As you know, our ICO will start in a few hours. So make sure to take a look at the latest official Hash Rush post, showing exactly how you can participate:

Looks great :)
ICO investors get insta access to the alpha?

pocketsend:[email protected],
Hi Lostrapt! Actually only those ICO investors will get access to alpha, those who had invested in the first 3 days of the ICO. Sadly, the first three days over. But you can still invest in ICO and get other bonuses, like I mentioned in my article.

This game looks sooo awesome. Even though some games fail after lunch, somehow I have a good feeling about this. Combining a good gameplay and crypto is an insane idea.
Can somebody please explain how is this efficient for the game developer?

I am very new to crypto and it's world, basically I started dealing with not even a week ago, so I still have so many questions. (and sorry for the stupid or obvious questions asked)

pocketsend:[email protected],
Well, the tokens are in great volume. If will take some time for the game to be popular. Plus if it's prices skyrocket, then that means you will be able to buy more things with less tokens. Like in case of Bitcoins. And for the developers, they will of course take their cut. It can become a life long earning method for them.
Between, I am also new to crypto world. So no question is stupid or obvious for me!

Glad I stumbled onto your post. Judging from the trailer, the game style is right up my alley. Will definitely support the project once the ICO starts. Can't wait for this to come out! Thanks for the heads up man.

pocketsend:[email protected],
My pleasure Deadsec. I also think this project will be highly successful. Thanks for your comment. 😊

If this game will succeed I would be willing to invest (crossing my fingers). I think the game itself is awesome and earning with crypto from this game is like winning a jackpot in a lottery! I will include this game in my online gaming. The characters in the game are all new and fresh design!

pocketsend:[email protected],
Thanks for your valuable feedback!!

It sounds like a cool concept, and honestly, it sounds like something that will be more common in the future. I do invest in a lot of things, but I might have to hold off on that and wait and see what will go on. Its a lot of risks, so there is a high chance that this ICO may fail, so I am going to hold off on it until the official release comes up.

pocketsend:[email protected],
Thank you for your honest opinion. It is indeed a wise decision to wait until they release some solid product. But I made a small investment of $40 so that I can take part in the alpha release. If it succeeds then viola, otherwise no big loss!

Thanks for sharing. Maybe I give it a try, style looks really cool. And I already had worse Investments in Games ;)

pocketsend:[email protected],
Yup, investments are always risky. But I shared about this game since it has got quite a lot of potential. Sending some POCKET tokens to you.

First ICO for a game that I hear of. Is ICO becoming the new Kickstarter ?

pocketsend:[email protected],
Ya, ICO is becoming the new kickstarter for sure. And surely in case of this game.

Congratulations! This post has been upvoted from the communal account, @minnowsupport, by siddartha from the Minnow Support Project. It's a witness project run by aggroed, ausbitbank, teamsteem, theprophet0, someguy123, neoxian, followbtcnews/crimsonclad, and netuoso. The goal is to help Steemit grow by supporting Minnows and creating a social network. Please find us in the Peace, Abundance, and Liberty Network (PALnet) Discord Channel. It's a completely public and open space to all members of the Steemit community who voluntarily choose to be there.

Congratulations @siddartha, this post is the tenth most rewarded post (based on pending payouts) in the last 12 hours written by a User account holder (accounts that hold between 0.1 and 1.0 Mega Vests). The total number of posts by User account holders during this period was 1193 and the total pending payments to posts in this category was $1818.30. To see the full list of highest paid posts across all accounts categories, click here.

pocketsend:[email protected],
Haha, seems you don't have POCKET tokens. Here I sent u some!

Haha I thought i have tokens, never tried to send . This is the first time I tried but how to get tokens @siddartha

Now, you can only buy them from other people. Or you can search for pocket tag on steemit and know who are giving out free POCKET tokens. Like I always give 100 tokens to those who make post related comments on my post.

Can I know what is the use of pocket tokens?

Nothing much right now. But you should hold it as it is slowly gaining value. You can read more about it here: https://steemit.com/steemit/@siddartha/announcement-pocket-tokens-for-all-those-who-comment-on-my-posts

Also you can follow @biophil who is the creator of these tokens and know what updates it get.

Bro, stop posting these kind of comments. People will downvote you instead of upvoting. It's better to make post related comments.