From zero to snake in 900 seconds

This is intended to be the gentlest introduction to programming video games that I could imagine. An easy to follow tutorial that breaks it down in simple steps. The end result is a short Python program that implements the game 'Snake.'

A basic understanding of programming is helpful, but even without that, you can still follow along and get an idea about what steps are involved in making a simple video game.

First a little history: when I learned to program in 1982, the threshold for doing this was so much lower. You would simply plug in your micro computer, and you are instantly in your development environment: the prompt of a BASIC interpreter. Compare this with heavy-handed frameworks, drivers, libraries, plugins, assets and you'll come to the conclusion that it was easier back then. See below on how it used to be: instant-on development machine. 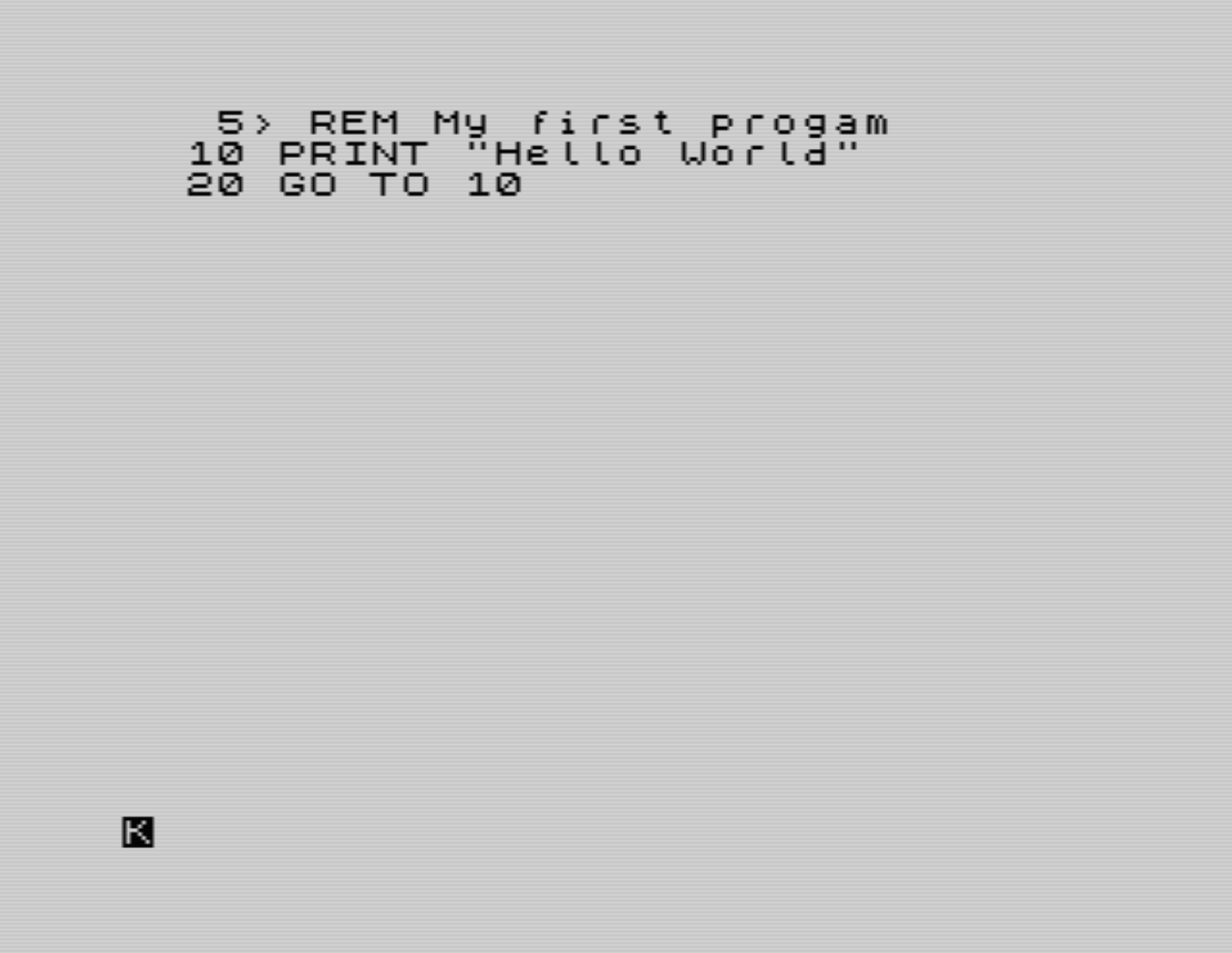 This tutorial goes back to the roots, but on a modern PC. So, we're not going to burden ourselves with the GPU, with window creation, graphics contexts, assets, or anything like that. Instead we will leverage the power of a text based terminal. We can do this with the curses module that comes with Python.

The nice thing about snake is the simple essence of it: it just boils down to outputting characters to a text screen at certain locations, according to certain game-rules of course.

Drawing a game board

Next, we will define what our game board looks like: just an empty fenced field. We define it as a list of rows. And each row consists of 25 characters.

The curses module will be calling our main function. Our main function will loop indefinitely, and in each iteration will clear the screen, add a little help message and draw our board. When drawn, we tell curses to refresh the screen.

We also tell curses where to find our main loop.

This leaves us to define how we actually draw the game board by specifying the draw_board() function as follows:

This code simply iterates over each row in our board definition and add it to the screen as a line of characters. The join() function call is a technicality that can be ignored for now. It enables us to print boards that are either lists of strings or lists of character-lists.

And that is it. We are displaying our game board on the screen. It's as simple as adding lines of character to the screen.
Download snake1.py and run it with python snake1.py Then in our main loop, instead of drawing our empty world, we will set up a board that is a copy of our world onto which we place the snake body parts like this:

Note that we modify the board by adding a 'O' character for the head and a '#' for all the other body sections of the snake. We then pass the board we just built up to our drawing function:

Running snake2.py will now show a snake on the board: 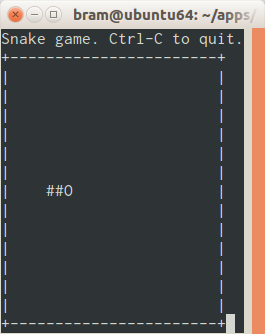 Our next task is making the snake move. Before we can define movement, we need to add some timing to our main loop. We can't move the snake at the full speed of the computer, we will pace it on a 0.2 second period. So first order of business is to import Python's time module like this:

And slow down our main loop with

We will have to define the travel direction of our snake too. We will use two deltas for this:

To move to the right, the delta row (snake_drow) is +1, and to move left it is -1. To move down, we will use snake_dcol is +1, or to move up with snake_dcol is -1. So the initialization above will make it move right.

Each frame we will move the snake using the following function:

Because movement can also cause death, we will let the move_snake() function return a value True/False to signal if the snake died or not. The snake dies if it eats the fence, or its own body.

To move the snake, we first calculate the new position of the head by adding the snake_drow and snake_dcol deltas to the current position of the snake head. This coordinate becomes the new head. We also need to remove the tail of the snake, otherwise our snake would grow. And growing is tackled in the next section.

We will handle snake death by adapting our main loop. We no longer loop indefinitely, but stop when move_snake() has returned the value True.

Running snake3.py will now have our little snake move to the right, and dying when it hits the fence. It's alive! (and dead.) Not bad at all for a few lines of Python, I would say.

Next up we will add food to our little game world. We'll just represent this with the '*' character.

And before we draw our board, we place it on the board with:

Now that there is food on the board, we need to check if the snake eats it. This is simply a matter of checking whether the food position is the same as the newly calculated head position as we are moving the snake.

And if we did actually eat the food, we should grow the snake by one. We can do this by just not removing the tail after moving:

...and spawn the food at a new location:

And there we have it: snake4.py that implements a moving snake that eats food and dies on obstacles. And that means we are nearly there. All that is left is adding the player controls.

We will let the player control the snake with the W/A/S/D keys. The effect of the control is very simple: we modify the global variables snake_drow and snake_dcol to point in the desired direction.

Before we can do that, we need a way to detect key presses. We need to set the curses window to a mode that does not echo the key presses, and will not delay the program while waiting for a key press. This is achieved with the snippet:

This enables us to get keypresses with getch() and act on them:

And that is it, folks! We have implemented a full game of Snake with the minimal amount of effort.

Would you believe it? Even written for clarity, not brevity, it only weighs in at 81 lines of code. Nice! Excercises for the reader:

Wow, great tutorial :D and you present all the aspects needed for a game. Hope you will continue with this series (of tutorials).

As someone that had learned programming to some degree several times, I do agree that a hands-on approach like this is optimal to start with. First have people see what they are doing, and then you can explain how and why it works before you continue.

It's similar to teaching people deeper strategy in games, you often need people to understand the basic concepts by trying it out before they are ready for more.

BTW, I'd actually spend a few words explaining what modules are in general, and curses in particular, even if you need to keep it simple at this stage.

Congratulations @mazarax! You have completed some achievement on Steemit and have been rewarded with new badge(s) :

I am part of the eXperience Points (XP) stakeholders and I'd like to get in touch with you on how we can support you with our ecosystem. We'd love to work with passionate game devs. Please DM Digiwarfare and Evangelo on Discord https://discordapp.com/invite/NYMAUec