How I found a Nintendo Switch at Retail Price and You Can Too!

legosnjoysticks (44)in #gaming • 4 years ago 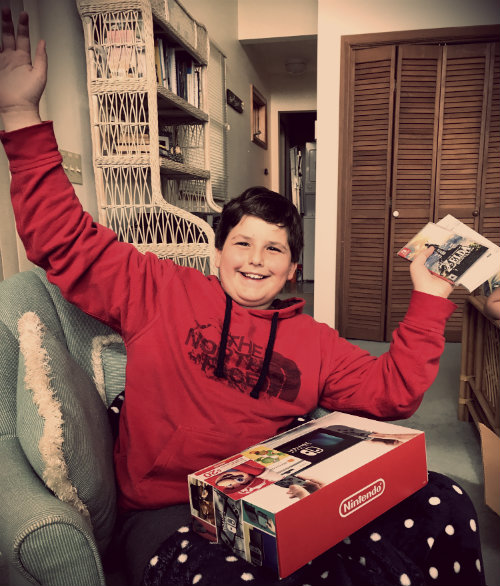 Pictured above is my son's excitement after discovering that he received a Nintendo Switch for his birthday. Normally he does not get such expensive gifts but gaming is a family hobby so it was a perfect opportunity. This was the only item he wanted. The problem was finding one at the retail price of $299 and not the Amazon/Ebay price of $400 plus.

I started looking a few weeks before his birthday with little success. Not a single store in the area had one. I decided to look to Reddit. I found a subreddit called Nintendo Switch Deals.

I saw many deals, but they were already sold out. I needed a way to be notified when a deal was posted. I wasn't sure if the official Reddit app had notifications so I turned to IFTTT. 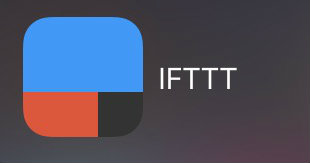 I downloaded the IFTTT app for iPhone. When I clicked to search I noticed that Reddit already had applets made. (Applets are what drives IFTTT) I clicked on the Reddit icon and found the applet I needed. (New Posts in subreddit notification) Every time someone posted in the Nintendo Switch Deals subreddit I would receive a notification on my iPhone. 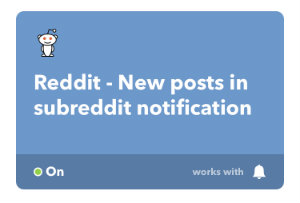 I pasted the subreddit name in the setup, turned on the applet and I was ready to go. Later that same day I was on a walk with my wife when I received a notification that Walmart had the Nintendo Switch in stock online. We stopped mid walk and ordered it. The Switch was delivered to my local Walmart so I could get free shipping and a few days later I had the Nintendo Switch in hand and a few weeks later a very happy son as seen above.

I didn't delete the applet and I am glad because a few days later I received another notification that the new Zelda game Breathe of the Wild was on sale at New Egg for $40.00. I quickly snagged it because that was the one game I was going to purchase.

Just yesterday I received a notification that Amazon had them in stock for Prime users. Below is the notification. 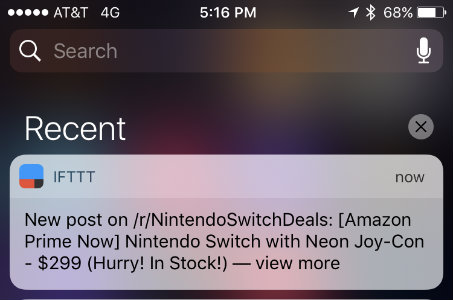 Good luck! And please don't use this to hoard the systems to try and make a few extra bucks. I'm just getting started on Steemit, but for future posts about gaming and other topics follow @legosnjoysticks.

We are lucky in HK, as long as you're willing to purchase a few games with Switch, you can get it at normal retail place.

They do have bundles here. I was not able to find one with the game we wanted, and I didn't want to buy the pro controller and all the extras at the time.

This post is so useful! I've been wanting to buy one for a long time

I've never walked into a store to see one in stock. I still look even though I have one. Thanks!

Believe or not, Best Buy has them in stock, for me at least. Always go inside and never take the website seriously.

Wow, they've become really scarce in Ohio. A mom we are friends with wanted to get her son one for his birthday and she tried to find it a few days before and she was out of luck. I would of helped her if she would of asked about it earlier.

Zelda... ahh the memories., these games inspire me to go on adventures from time to time :)

That was the toughest game I ever played besides the NES Teenage Mutant Ninja Turtles game.