I logged into Elite Dangerous for the first time in God knows how long. Maybe eight months.

Being the sensible sort, I went through some of the training again because I had no sodding clue where anything was or what buttons did what. Chuffed that I had done the right thing, I logged into the main game.

My view from the cockpit was filled with stars. Blue ones. Way too busy. 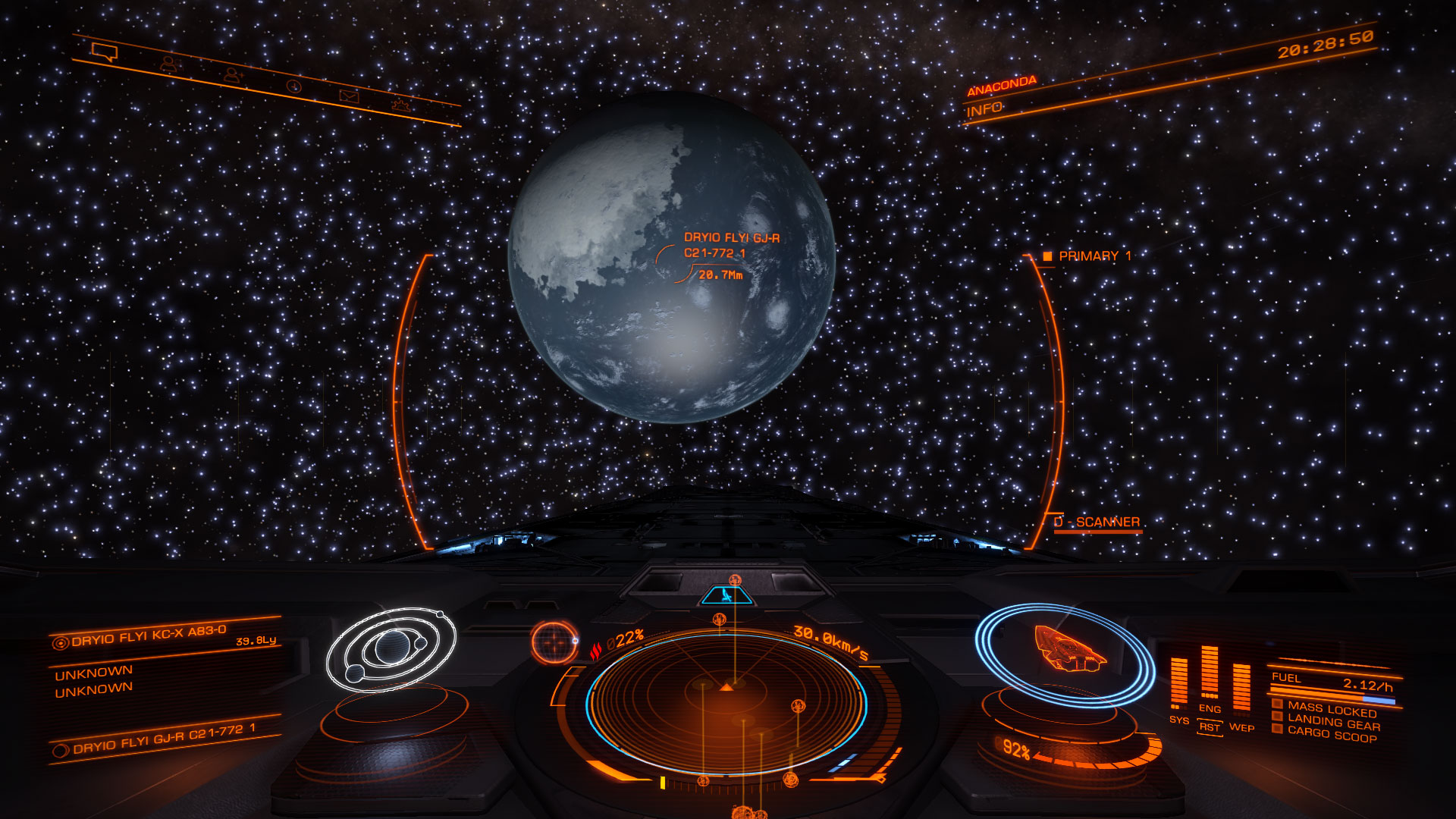 Wu Guinagi, the port I’ve called home since Beta, was 20,203 light years away. It’s so freaking far that the nav comp just snorted and told me to piss off when I tried to plot a route there. I had to pick a star some 7,000 light years en-route and set course to that instead.

My passengers were no longer on-board. We were a little overdue, I grant you, and we probably ran out of cheese and crackers but jumping overboard at Saggitarius A* is an action that they may regret. I wonder what consequences I will face for their loss on my return. It’s odd but I can’t help but think of them in individual life pods staring wide-eyed out of the window, their hands firmly pressed to the glass as they circle the ultimate drain.

So, things have happened since I was away. Notably, the Thargoids.

Thargoids were a race of exceptionally violent aliens in the first Elite game back in the eighties. They’d drag you out of warp and attack you as soon as your ship made real space.

They were a pain in the tits.

One result of the little bastards’ belligerence was that no player ever managed to avoid a fight and therefore the game was more than just a trading simulator. Which was just as well as trade goods pricing sites like eddb.io didn’t exist and your only chance of making a decent deal on a regular basis was to jot down each station’s prices on separate sheets of paper and endlessly compare the damn things. Even as a trader, your ship had to be tooled up or the Thargoids would be harvesting your bio-waste cartons from the void amid an expanding cloud of particles that were once your ship. And you.

In the new game that wasn’t necessary. Yes, there were pirate NPCs but they were easy to get away from if you knew what you were doing and had any kind of shield. In fact, explorers – i.e. those travelling out with known space, had little to fear at all and frequently did without shields or weapons in order to lighten the ship and gain a bigger jump range. Which brings us to my current conveyance. It’s an Anaconda, which is one of the bigger ships in the game. It’s nowhere near as large as the Cutter that I spent eleventy billion trading runs increasing my imperial faction for to the point that I’m now a fucking Duke, but it has twice the jump range. When you’re going all the way, you want to get in there as fast and as deep you can.

In order to lighten the ship and thus maximise jump range, I stripped all the guns, pulled out the cargo holds, minimised the power plant and distributer and reduced the shields to a fraction of what I would normally run. I did keep a small amount of protection in case I bumped it while landing. Think of the shield as an interstellar prophylactic. Intact but unable to withstand serious penetration.

Then I filled it to the gunwales with passenger cabins.

Which are now echoingly empty as everybody fucked off while I was AWOL.

And yet, by the time I return to human space, I should have around 60 million credits worth of exploration data. Which is nice. Or it would be if it weren’t for the fact that, while I was away gallivanting around the interweb for half a year, some bastard decided it would be a whizz-bang idea to bring the fucking Thargoids back.

So, to recap. I am the sole occupant of a ship so large you could paint SHOOT ME, I’M STUPID in 40 foot high letters on it and still have space for a sonnet. It’s so painfully slow that I might as well be pedalling a whale to the stars and it has not a single weapon or any shields to speak of.

It is utterly defenceless and if it gets smeared across a small section of the sky by some green skinned little fucker with an attitude problem, I lose all my survey data of over a thousand systems.

Thargoids FFS! I still have 370 jumps to make.

Sounds like a metaphor for cryptocurrency buy/sell/hold activities. Big fat empty spaceship of nothing.

I remember Elite from the 80s, played it back on my Atari ST. It was a hard game. Damn you Thargoids.

Still have my 1040ST hooked up in a corner of my office! :D Never played Elite but was a serial veteran of Sundog.

A fairly good Windows version. I've played it through several times and for the most part, it recreates the original.
Sundog: Resurrected Legacy

Oh no, not the Thargoids! But seriously, it sounds like a really sophisticated game. I’ve never played such a thing in my life, so this was a fun read. I can live vicariously through your virtual travels.

I am so glad I crawled out of bed and found this, I am trying my best not to actually laugh out loud. This game sounds like Sundog on steroids.