So You Think You Can Fish: A Guide to Fishing in FFXIV Introduction

If you are an avid FFXIV player then you have probably tried fishing, leveled it through your Grand Company, ignored it because you hear it’s awful, or have gotten so deep into it you make the same old “it’s because I hate myself” jokes. If you are not a player of FFXIV I probably lost you at “Grand Company.”

The short of it is fishing is one of the three gathering jobs in Square Enix’s MMO FFXIV and one of my favorites. The other two being Miner and Botanist. All three gathering jobs are used to gather materials for the eight crafting classes also in the game. Disciples of the Land and Disciples of the Hand. DoL/DoH for short. Apart from becoming part of a team that does raid carries, gathering/crafting is the best way to make in game money aka “gil”.

Anyone who has played an MMO is probably familiar with the crafting/gathering systems. One of the things that makes fishing in FFXIV so different is the lack of hand holding with the pure overwhelming amount of information. This guide and the ones to follow it will break down fishing and work towards dispelling the stigma that it is the worst thing to have ever happened.

Until you get into end game all three gathering jobs share nearly the same gear set. You have “left side” gear, your “right side” gear, then your “main hand” and “off hand” items. All three classes will have different main hands and off hands. Fishers don’t get their off hand item until level 61 (and after plowing through more Main Story Quests). The fisher’s main hand is the fishing pole (too easy) and the eventual spearfishing gig. There are no fish in the fishing areas below level 61 that require the gig, so don’t fret about getting there!

Chances are if you are getting into fishing you are already familiar with FFXIV’s gear system and are familiar with what I am talking about. What you are probably less familiar with is the clusterfuck of lures and baits required to fish. That’s right folks, you can’t just go swinging your rod anywhere, you need the right bait at the end of your hook. This is the first step to what makes fishing intimidating.

After getting your first fishing quest, and fishing off the side of that pier two feet away, head over to the “Junkmonger” in any of the housing districts. Here you can get all of the level 1-50 baits. You don’t need to buy them all immediately, but remember this for later!

If you pick the first route chances are you will skip a lot of the earlier areas. That’s okay as you can always go back to them later. I will heavily recommended you do the job quests. Prior to 4.0 not a lot comes from the quests, but Square Enix added new job abilities you can only get through doing the quests. The level 63-68 quests also give out some crazy experience compared to the chunk of level 1-60 quests.

If you pick the second route chances are you won’t be able to keep up with how fast your battle class will level. Square Enix has accelerated leveling compared to what it was in 2.0. I recommend a hybrid form of leveling if only because that’s what I did and I am neither jaded or burned out over the whole ordeal.

Turn in GC quests, do a few leves, keep up on the job quests, and focus of the story. If you are already in the end game and are reading this, rock on.

These are great albeit limited to one a day as they give great experience and even better experience if you turn-in high quality items. While you want to turn-in HQ items every time it’s still better to turn something in for the day than to turn in nothing at all.

While not as limited as the GC missions, you are still moderately limited to how many of these you can do. There isn’t a “daily” or “weekly” cap, but rather “allowances.” Levels 45-50 will be the toughest to level and I suggest making sure you save leves for it!

Around level 51 you will have done a few quests and opened up access to Rowena and her band of merry women. If you have been playing for a while you are familiar with these characters as they are also the same group of people who handle your raid gear. While levequests are the fasted way to level they are limited. Rowena offers another way to alleviate the pain of leveling. 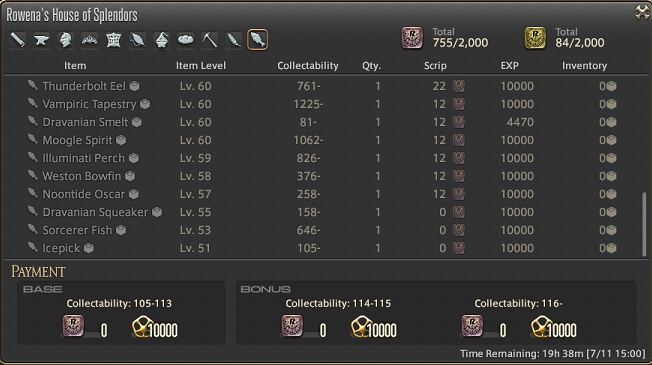 You can see that the experience I would gain is capped at 10,000. This is only because I have reached level 60.

The Weather, The Time, and The Aggravation

The fish you fish up for the quests and leves are mostly reasonable. They will all have certain required baits, but very few need certain weather and/or time. The aggravation happens in the end game, doing the “Of Dragons Deep” quest, and completing the “Big Fish” achievements. Things aren’t as bad as they seem! With tools such as FFXIV Angler and Garland Tools Bell you too can become a fishing pro.

This is a broad swipe of the brush and I will break down the parts as I continue to make more posts! Stay tuned in!

Next Guide: Baits, Lures, and Locations

Congratulations @jeralith! You have completed some achievement on Steemit and have been rewarded with new badge(s) :

https://steemit.com/bass/@kacaca36/fishing-from-a-boat-is-better-than-fishing-from-the-shore
Why fishing from a boat is better.