Before every post I like to give a small introduction on myself to give the readers a better understanding on who I am and what I post, so without further-a-due lets get right into it! I'm ggteixeira, or just Ggt for short, and I'm an active member of the Steemit community whose been around for about half a year now. I mostly post in the gaming section where I share game-plays, guides, reviews and just about anything related to video games! Some of my more common posts have to due with two of my favourite games; League of Legends and Fortnite. If by any chance you find yourself interested in any of these games or topics, feel free to check out my page @ggteixeira for more related content. It's also always appreciated!

Fortnight is a third-person multiplayer survival game where the objective is to either by yourself or with a team be the last one or group standing out of 100 other players. There are a variety of different aspects in the game that make it unique in comparison to other battle royale games. Some of these include it's fun cartoonish art-style or it's addictive almost arcade-like gameplay. The most outstanding feature though that really sets Fortnite apart from other battle royale games has to be it's voxel-based building mechanic, which let's players build and destroy buildings in-game. 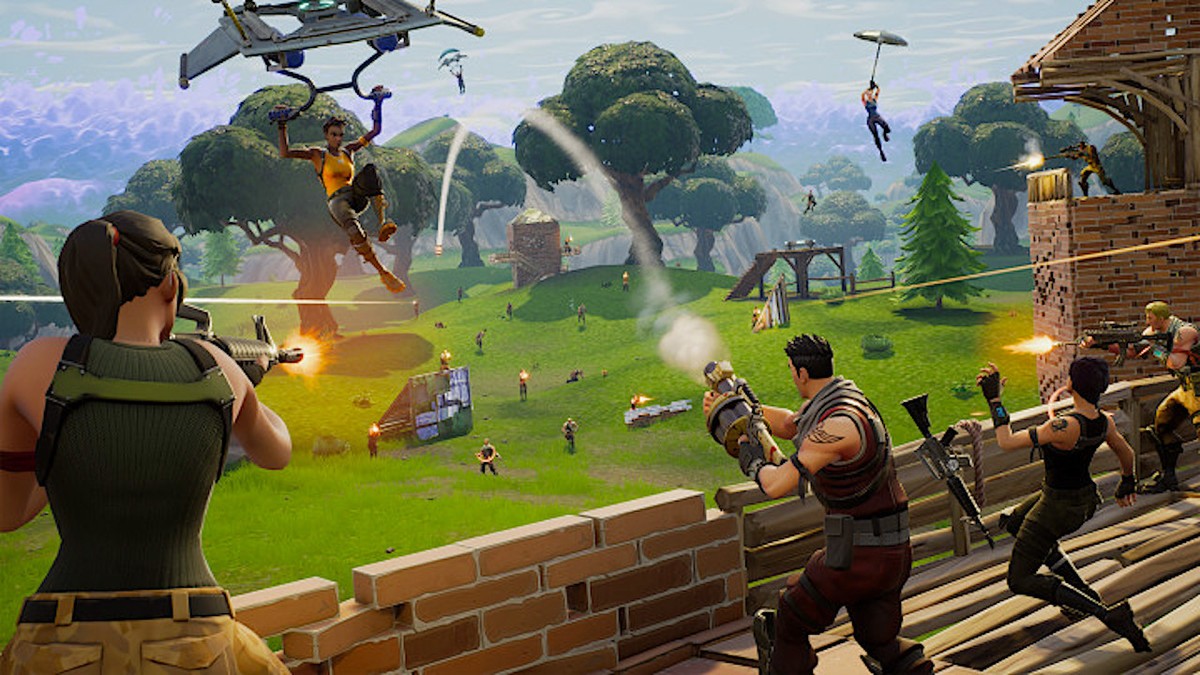 So today's video is less about me and more about the squad I was playing with. We decided to drop into our favorite area of the map (old), Salty Springs. The catch with dropping in Salty is it's also the most popular area to drop on the map due to it being placed in the dead-center of the Island. Heavy fighting is almost always expected in Salty and today's video is no exception. In my squad I was sadly the first one to drop and right in the beginning of the game too. But my friends picked up the slack, moving onto the very end of the game. I'm not going to spoil anything in specifics on what happened and if they won or not, but let me say that there's some crazy plays in the video made by my real life friend Kevin, aka BloochTV.

Some of you might've noticed that I'm not using YouTube to share my video and instead something similar called DTube. Once again with descriptions, here's one I've written up for previous posts explaining what DTube is.

DTube is kind of like YouTube, but instead of being on it's own separate site is linked to Steemit directly instead. On DTube, content creators can upload and share video-form content relatively easily with other users on Steemit. There the videos just like posts on Steemit can be up-voted and commented on. All the up-votes and comments are shared between the Steemit post and the DTube video. For gamers like me who love to upload gameplays and clips from the games we play onto Steemit, DTube is a dream come true.

If you want to learn more about DTube what better place than a post made by the actual creator himself which you can find here. Furthermore if for whatever reason you find yourself with any questions or concerns regarding DTube, leave them in the replies section below and I'll answer as soon as possible. Just in case y'all didn't notice, I wasn't the spotlight of today's video. I died right away and most of the game-play shown was of my friend, Kevin. He's been playing Fortnite for roughly a month or two now and is insanely good at the game. I wouldn't be surprised if he made it pro sooner or later. Right now though, he has his own Twitch channel where he streams Fortnite daily. He also has insane clips like this one right here where you can witness first-hand at how crazy this guy really is when it comes to Fortnite.

If you're into this kind of content, make sure you twitch.tv/bloochtv with a follow and drop by his stream if y'all ever got time. Trust me you guys won't be disappointed!

I want to firstly thank everyone for checking out the post and hope you guys enjoyed it. If you have any comments, questions, or concerns regarding anything topic-related, feel free to leave a reply in the replies section below and I'll be sure to respond. Also, something to note is that Fortnite, the game talked about today, is free-to-play! So if you don't already own it, make sure you pick up a copy. Otherwise, make sure y'all have a great day and can't wait to see you guys on Fortnite!

Submit
$0.51
6 votes
1
Authors get paid when people like you upvote their post.If you enjoyed what you read here, create your account today and start earning FREE STEEM!
Sort Order:
[-]
ateazi (53)  ·  2 years ago