I had almost missed another season of Diablo 3. I had wanted to play the Necromancer more and get a better understanding and feel for the class.

A friend of mine noted as well he had not even created a single character for season 12. The solution of this was a friendly little race between the two of us.

You could only play 1 class but you could have more than one of said class. 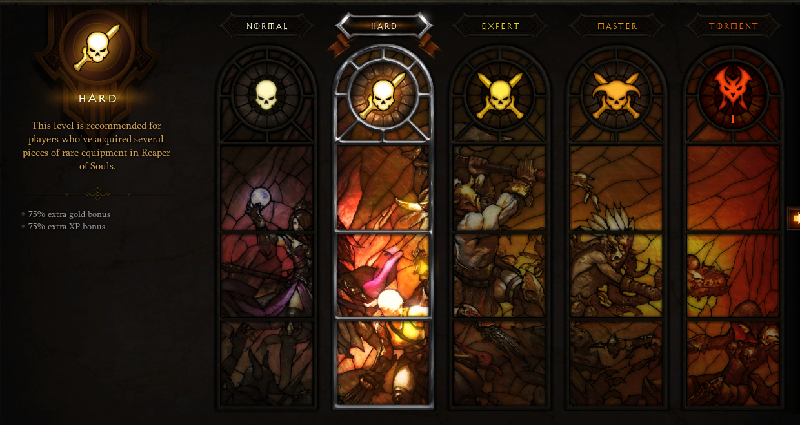 I have only played a Necromancer a little bit in the past. One thing I have never enjoyed is just how slow the initial leveling of one is for me has been in the past. I went with a skeletal mage with bone spikes build that I had found over on icy-veins. I really could not work out what I dislike about it. Not fully understanding the class yet so I just pushed forward for a few days.

First few rifts I could tell the RNG gods where only not on my side they were helping out my new foe! He was getting legendary drops left and right while I was not getting a single one. It had gotten to the point where I was looting everything just hoping to craft a couple of pieces of gear from forge armor artisan to fill empty slots.

By the time I had reach level 70 I was down to hard difficulty and a little embarrassed. I was far behind and it even took me a couple of days to reach it as neither of us had much time to spare the first few days of our race.

Torment II: Bane Of My Existence I was rather rusty but I was not expecting things to go this bad. I had worked on some season progression to get parts of my gear set. Rerolled stats on all my gear as I was getting it and work my way up to Torment II. Where I then plateau and stayed for many days on.

Knowing they changed something in past to slow down progression but this was just ridicules. I was still using a two-handed I had picked up fresh around level 70 and it was not getting any of the Necromancer specific scythes I had use for. I even tried out a couple that did not go well with the setup I was running and kept returning to the two-handed weapon I had.

In the past, I have wasted a fair bit switching into a build to soon and so I pressed on trying to get a couple of drops I needed to make the switch. Not knowing the item drops well for Necromancer I just could not target and get the items I needed to progress forward. 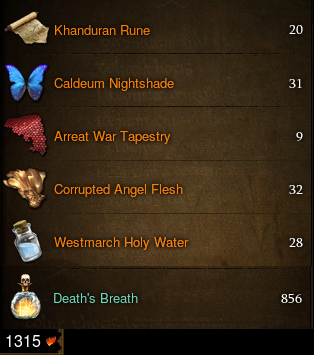 After gambling many Blood Shards at the vendor and Death’s Breath in the cube I resorted to running for caches on Torment II solo since it was a solo race after all. Needless to say, I fell further behind. I had some amazingly bad gear but they were not worth trying upgrade till I acquired some needed parts.

RNG gods have forsaken me for whatever reason. Failing to get some items I needed and falling further behind I decided it was time to try out some other builds. I least had another set and a growing number of legendary in the bank so I gave a few different things a try. 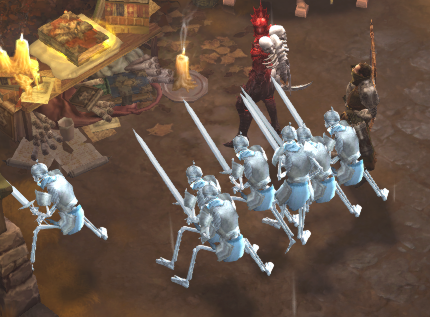 In the end, I kept coming back to wanting to use a minion build. Skeletal Mages and Command Skeletons was now my favorite play style and it worked out. Trag’Oul Skeletal Mages is a really fun build I was just lacking more or less everything expect the Trag’Oul set and to my shock, it was amazing without all other needed pieces.

I had to make some skill changes to make up for my lack of correct gear but almost instantly I shoot up to Torment VI where I again plateaued. I still had some yellow pieces yes RNG was that bad I was still holding onto some yellows. It was just not worth the cost to upgrade some poor legendary for a small 1-2% boost in stats compared to trying to get what I needed.

I went for the rings next since had 0 of ones I needed to really kick things up a notch. I was even starting to close the paragon gap of over 100 between the two of us. This was a total disaster but I pressed up anyways.

From Sure dumb luck I had gotten both the main hand and already had off the hand of Jesseth necromancer set. It was time to dump the two-hander I had for so long and start pressing forward in Torments again. They were horrible items even after rerolling the worse stats on them I lost nearly 50% paper DPS. Despite that, I was now able to switch some skills and enjoy a set bonus of “400% increased the damage of all minions.” With some of my gear starting to come together the clearing was easy I just lacked the mass or health to press on and so I spent a few days locked into Torment VI. I was still struggling to keep Skeletal Mages at max but things were moving along.

While the Circle of Nailuj's Evol ring was not a priority at the start I was starting to desire this. It has a bonus of raising 2 Skeletal Mages at once and increasing how long they lasted by 4 seconds. Why that would resolve my resource issue of not having enough essence to keep a full army of them summoned all the time.

So I started to dump endless thousands of Blood Shards and Death’s Breaths into trying to acquire this item. While I had been closing the gap and trying catch up in this race I was starting again to fall further behind. I just could not get this ring and spent two days of farming to try to get it.

I did a little research and remember an age-old trick once I noticed the item level. I could make another Necromancer and spend my Blood Shards over there to target it in a smaller pool of legendary at a lower level. Just one small issue. I had already cubed my other needed ring it had a low percentage increase in damage to slowed enemies and no socket or other good stats. I assumed I would just get the other ring I needed and thus I did not even think about it at the time of destroying it to exact out its power. 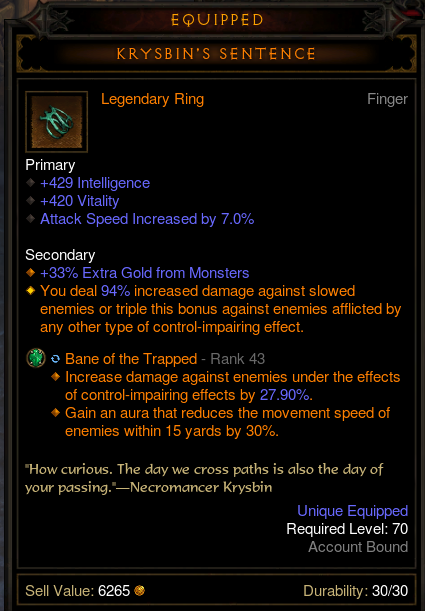 As such I pressed on gambling and running rifts trying and hoping for either the ring I wanted to drop or another. Until I got another one that I had cubed. It was horrible, to say the least, but at this point I just needed it. I ended up rerolling one of its stats so I could use get a socket in it. I made another Necromancer and to my shock, first 1000 or so blood shards spent at the vendor netted me the ring I now needed! With it being such a low-level ring off to the cube it went and its power was now mine.

Torment X: End is Near 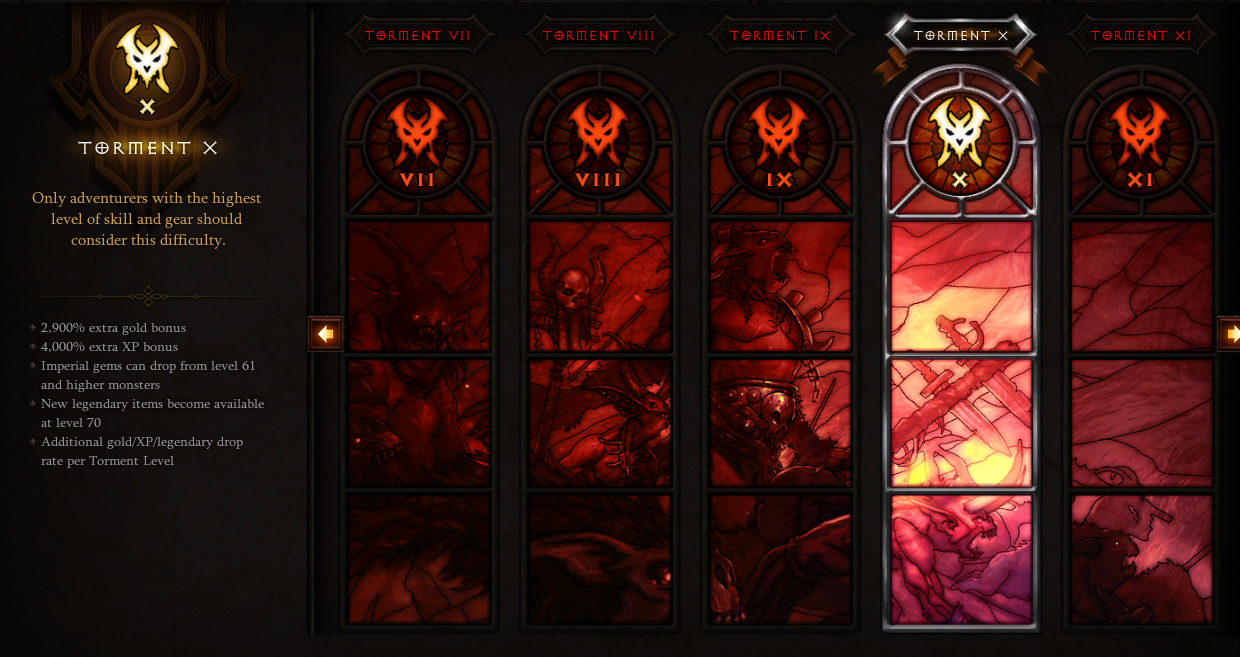 Now with a decent drop rate for rift keys and being able to clear Greater Rifts in 3-4 minutes I pushed up as far as I could until I just lacked the health more than anything else to move forward. I was hoping to make up some time and start replacing some horrible gear. I had finally at least basis of everything I needed. I was starting to close in and my army of minions was not willing to slow down one bit. I was keeping the Skeletal Mages up with such easy I was often running around with 10 just for the sake of it.

We both were hoping to spend last day of the season grinding it out to the bitter end. However, an emergency phone call had ended that idea. So we agree it was now over. 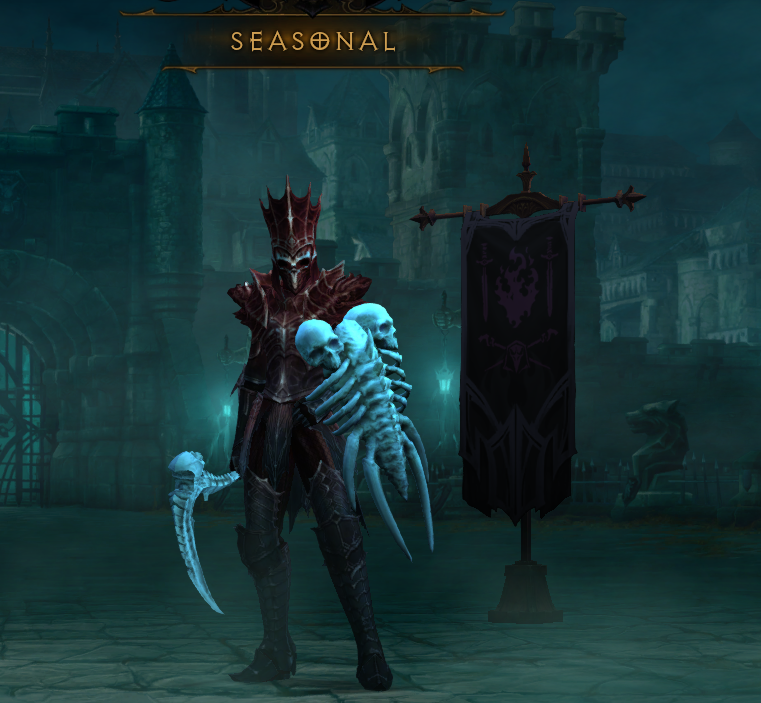 I lost by 44 paragon levels it was an embarrassing defeat! Still lots of fun I would not have played any of the seasons if it was not for it. Looks like I’ll be farming for an extra Tabula whenever the next league in Path of Exile is.

I am excited to play the necromancer again during another season depending on what changes they make to it.

Screenshots taken and content written by @enjar about a race I had with a friend.

From the game Diablo III

Oh and I am going to assume you play on PC? I play mine on my PS4

PC all the way. Would drive me crazy trying play something like this with a game controller and no mouse :)

LOL. It's not that bad. I have played both.. Well now that I am thinking about it... I have played PC, ps3 and now recently ps4 with the Reaper of Souls Edition!

I played an earlier version I think a few years back, I normally only get into games over winter but this winter i havent got into any games at all

I guess I was to busy on here 😂

D3 is alight but I prefer older version of it myself. Mostly I was into Diablo II for a time.

It's been around for a while many have wished by now they make a D4. Sadly I think they might just be into creating short DLC and charging a couple of bucks for a new class. The necromancer for instance you had to pay extra for. Its fun but I just don't play it enough. I don't see myself spending any more money if they come out with other DLC packs like this one.

There are so many other game options for this kind of game play these days it might just be end of the road for them on this one. I only play this one once in a while because of that.

I totally miss the season stuff all the time.. I'm just randomly doing the adventures and nephlam rifts etc..

Ya, that is downside to seasons; even more so, when they have season down time so then you wait around because you prefer season/ladders and non-season is just boning grinding for such a small improvement in gear.

it's changed so much since the original diablo. I remember playing it i believe it was in 2003??? maybe 2002? I know my oldest was already born and I played it on windows 98 SE. LOL

I have no idea I came to the party late. Played original diablo years after its time and just loved it. I was more into StarCraft when ever that was.

Wow! I see you are having a great time!

I had an amazing time! Have not played in a while so its sometimes fun to play something different. With the season having ended I am glad enjoyed it while it lasted.